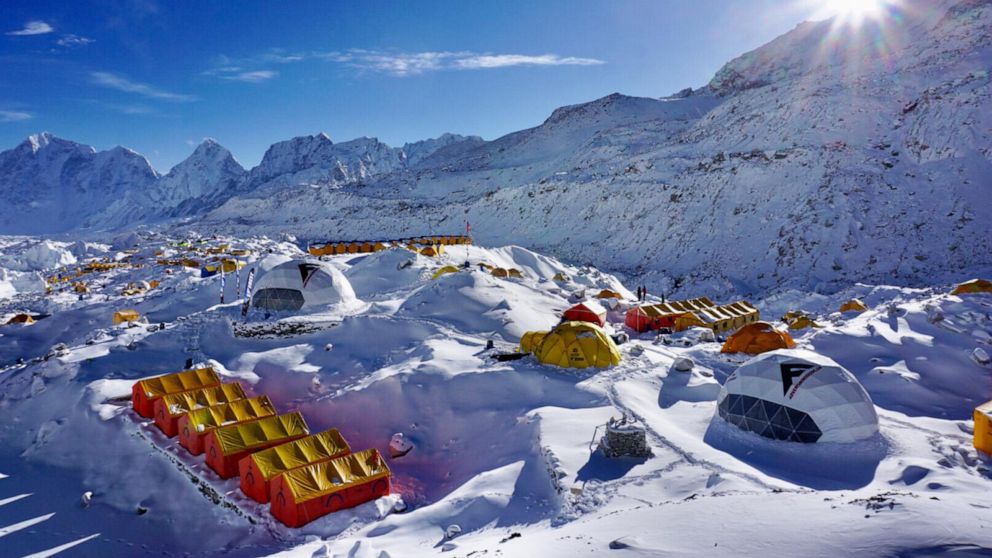 Rumblings earlier this spring that COVID-19 had made it to base camp at Mount Everest prompted fears of the worst: an outbreak of the deadly respiratory virus among people already impacted by the high altitude.

But as the dust settles from the climbing season on world’s tallest mountain, it appears disaster was avoided.

Four people died this spring on Everest — markedly lower than the deadly, pre-COVID 2019 season — and many expeditions reported successful summits.

Still, interviews with several mountaineers suggest a chaotic, stressful and costly time above 18,000 feet and unanswered questions about the extent of the COVID outbreak there as the virus raged in Nepal.

With Everest a major local economic driver, many expeditions decided to forge ahead, but others asked if it was worth the risk.

The situation on Everest

The Everest climbing season stretches from April, when preparations begin on the mountain, to early June, when final summit attempts are made. In a typical season, there’s an approximate 66% success rate in reaching the summit from the south, Nepal-controlled side.

This year, with permits at a record-high, that dropped to under 50%, according to Everest documenter Alan Arnette’s count.

“The only explanation is that already many people left before the summit push started because they were sick, they were evacuated with COVID,” Lukas Furtenbach of Furtenbach Adventures posited based on what he witnessed, “and others canceled their climb in Camp 3 or Camp 4 because they got sick.”

The four deaths included two Sherpa and two foreign climbers. Pemba Tashi Sherpa died due to a fall, outlets reported. The other deaths were attributed by operators to exhaustion and altitude.

Walking around base camp, Furtenbach said, you could hear people coughing in tents. Helicopters came in regularly to make evacuations, including riskier evacuations from Camps 2 and 3, which are at higher altitudes. Furtenbach, who’s been on Everest eight times, said this was notably different from other seasons.

Despite requirements from the Nepalese government for testing and quarantines and assurances the region would be COVID-free, the coronavirus reached Everest.

Furtenbach was responsible for 20 clients, 28 Sherpa, 12 kitchen staff and four guides. They were acclimatized and ready to make a summit push when he decided to turn the group around after one client and three Sherpa tested positive.

The safety — not to mention legal — risk was simply too much, in his perspective. Some clients disagreed.

“We said, ‘OK, that’s good for you, but you need a Sherpa to climb, and you can’t take the risk for your Sherpa, and I am not going to send a Sherpa up with you and risk their life just because you want to risk your life,'” he told ABC News, adding that some clients chose to continue on with other operators.

Risk to the Sherpa

Furtenbach said he had another reason to be especially concerned about the risk to the local Sherpa people who play an instrumental role on Everest: “They are the ones who get sick, because they are not vaccinated,” he said, while most foreign clients were.

Kunga Sherpa was working with Furtenbach when he tested positive. He was evacuated from base camp to Kathmandu, where he stayed at a hospital for one night before being sent home to isolate, which was, he said, the norm for those who tested positive without serious symptoms.

He recovered, but, he said, “some people are still in the hospital in Kathmandu.” An unanswered question now is if the COVID cases from Everest will have reverberations as local guides and Sherpa return home.

As India, Nepal’s neighbor, faced a COVID crisis, so, too, did Nepal, with cases exploding in early May. This created another moral conundrum: was it ethical to try Everest, which could end up with people taking up hospital beds, when the rest of the country was already in crisis?

Mountaineer Adrian Ballinger, ​whose Alpenglow Expeditions canceled their Everest trip this year as they couldn’t climb from his preferred north, China-controlled side and because of lingering questions like that, wasn’t so sure.

“What is the justification for utilizing medical facilities in Nepal during this outbreak? It just doesn’t match for me,” he told ABC News.

Furtenbach said he was waiting for other expedition leaders to make the decision to cancel before he did. He didn’t want to be the first to cancel but found himself in that position.

Afterwards, a few others followed suit, but not as many as he had expected. Meanwhile, talk was spreading that the Nepalese government was trying to keep word of COVID on Everest quiet.

“Many people made it to the base camp and it is possible that the people who went there from here could have been infected,” Prime Minister Khadga Prasad Oli said, according to the Associated Press. “But that does not mean that it (coronavirus) has reached the entire mountain, maybe a part of the base camp or the area below that.”

Everest plays a significant role in Nepal’s economy — as well as for individual Sherpa. The country had closed the mountain last year, as the pandemic was in its early stages, so had already missed out on a year of the sums that come in from it.

“I think the intention was good to protect the Nepali tourist industry. That’s what a government has to do,” Furtenbach said. “And you can of course say we are the bad ones, because we came in the first place, we decided to run an expedition during a pandemic. So we are the ones to blame.”

As has become a theme during the pandemic, the onus came down on individuals to assess the risk and act accordingly. But, Ballinger argued, that’s always an expedition leader’s responsibility.

“I don’t think companies held up their side of the bargain of what mountain guiding is, which is managing and mitigating risk,” he said.

Nirmal “Nims” Purja, a Nepalese mountaineer, has had a remarkable 2021. To kick off the year, he was with a group that made the first successful summit of K2 in the winter. Purja did it without supplemental oxygen.

At the tail-end of the Everest season in early June, Purja led clients with his Elite Exped operation to the summit. Of those who left for the summit push, he told ABC News, 100% successfully summited.

He credits the success in part to “amazing protocols” the Nepalese government had to try to keep COVID off Mount Everest, and, he said, his team managed to “deal with it appropriately” on the mountain.

“It’s an amazing result despite the COVID and with the current circumstance around the world,” he said.

A few days after arriving back at Kathmandu, Purja wrote on Instagram he canceled planned expeditions to K2 and Broad Peak due to uncertainty from “the ongoing Covid situation” and visa and travel restrictions (in mid-May, the U.S. put Nepal on its “do not travel” list).

Two days later, he posted for his 403,000 Instagram followers a call to the U.K. government “to help our communities by sending vaccines urgently to help their Nepalese friends,” referencing his own service for the British Special Forces.

“I was just wondering if, through my platforms, social media at least, if I can plead the U.K. government to support Nepal, who has obviously been loyal for more than 210 years, and now the people here need support,” he told ABC News.

Purja spoke with ABC News shortly after making that public appeal and had not heard major responses yet, although U.K. Prime Minister Boris Johnson announced the U.K. would be donating 100 million vaccine doses to poorer countries in the next year.

“It’s a bit of work, but I’m still positive,” Purja said. “And I hope good things will happen to good people.”