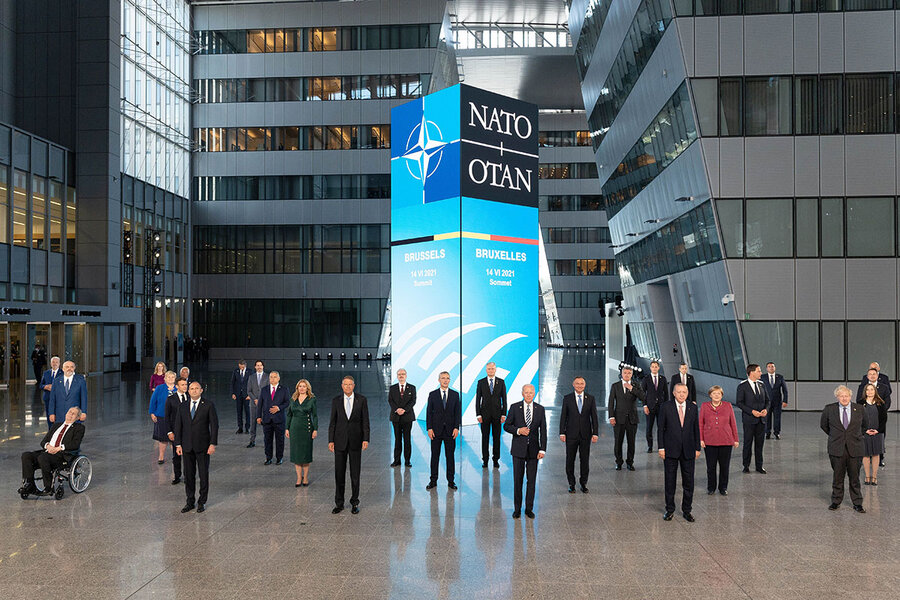 Atmospherics and style are not everything.

But in bringing his commitment to America’s alliances to the NATO summit Monday, along with his conviction that democracies are best suited to meet the 21st century’s stiff challenges, President Joe Biden went a good way toward answering a question hanging over the North Atlantic alliance since the end of the Cold War: What are you good for?

Former President Donald Trump had even suggested the defense alliance of Western allies was “obsolete,” leaving NATO officials and U.S. allies to worry Mr. Trump could pull the plug at any moment.

President Joe Biden’s approach to international alliances and shared values has helped inject a renewed sense of purpose into NATO. But could its focus become too diffuse?

But now, as NATO ends its Afghanistan mission in September, the transatlantic alliance of 30 democracies is deriving renewed purpose from new challenges: an aggressive Russia on the alliance’s eastern flank, instability around the Mediterranean region, a rising China with ever-advancing global technological capabilities, and 21st-century threats including cybersecurity and faltering democratic governance.

“There’s no question that the atmosphere of this summit is very positive and marks a shift very much appreciated in Europe,” says Ian Lesser, executive director of the German Marshall Fund’s Brussels office. “The shift on display is one of style, but there is substance to the change as well.”

Noting in particular President Biden’s emphasis on “strong alliances and democracy’s utility,” he adds, “The truth is that the American commitment to Europe has grown in many ways over recent years, so put these things together and a lot of the anxieties that were growing within NATO are now allayed.”

The new tone Mr. Biden seeks to set was made clear by the flagpole at the U.S. ambassador’s residence, where the president is staying while in Brussels – below the Stars and Stripes flew the rainbow flag, marking Pride Month. Mr. Trump’s State Department had banned U.S. facilities overseas from displaying the symbol of LGBTQ pride.

Actions Monday ranged from specific details of the U.S.-NATO partners’ “in together, out together” drawdown from Afghanistan – including plans for post-exit embassy security – to approval of a new cyber defense strategy updating the “defense, security, and intelligence dimensions of cyber across the alliance,” according to White House officials.

Notably, the summit communiqué will for the first time make significant cyberattacks a criterion for invoking Article 5 of the NATO charter – meaning a cyberattack damaging critical infrastructure in one NATO member could be considered an attack on the alliance and entail collective action.

“We knew from the White House that Biden was bringing on this European trip the three C’s – China, COVID, and climate change – but this NATO summit adds a fourth, which is cyber,” says Andrea Kendall-Taylor, director of the Transatlantic Security Program at the Center for a New American Security in Washington.

NATO has increasingly moved into new areas of interest in recent years, including emerging and disruptive technologies, “resilience” – meaning safeguarding infrastructure and supply chains from a widening array of challenges – and an expanding list of out-of-area partnerships, including in the Indo-Pacific region.

Moreover, leaders launched a process for delivering a new strategic concept for NATO, to be completed by next year’s summit in Madrid. U.S. officials note that the current strategic concept, completed in 2010, refers to Russia as a “constructive partner” and does not mention China.

Indeed, Mr. Biden had some of his alliance colleagues shifting in their seats as he laid out for them what the United States sees as the growing challenges China poses. Those range from provocative actions in the South China Sea and vital world trade routes to increasingly sophisticated technological and military capabilities.

Another focus is the array of political challenges that an authoritarian China poses to what the president likes to refer to as “an alliance of democracies.”

Yet even though a number of NATO members – most outspokenly France – remain wary of being drawn into a more confrontational stance with China, the summit’s communiqué “features China in a more robust way than we’ve ever seen before,” as one senior White House official said. Indeed, in the third paragraph on “threats” – right after mention of “Russia’s aggressive actions” – comes China.

“China’s growing influence and international policies can present challenges that we need to address together as an Alliance. We will engage China with a view to defending the security interests of the Alliance.”

Still, just how NATO approaches the China challenge will remain a work in progress.

The same head winds that buffeted Mr. Biden at NATO Monday were present over the weekend as he pressed his Group of Seven colleagues assembled in England to challenge China more directly.

At the G-7 Cornwall summit, the U.S. had wanted the final communiqué to call out China directly for a number of transgressions, including forced labor practices and other human rights abuses. But a heated discussion among leaders revealed strong resistance to a barrage of direct finger-pointing that would have suggested a G-7 buy-in on a confrontational approach to China.

So while the G-7 final communiqué does cite China by name in its 49th paragraph (out of 70) for human rights violations in Xinjiang province and for undermining Hong Kong’s democracy, the document offers only a general concern about “the use of all forms of forced labour in global supply chains, including state-sponsored forced labour of vulnerable groups and minorities including in the agricultural, solar, and garment sectors.”

White House officials insisted they were satisfied with the wording on forced labor practices and the clear reference it makes to China, given global awareness of the forced labor that China’s Uyghur Muslim minority is subjected to in the mentioned sectors in Xinjiang province.

The upbeat mood and renewed sense of purpose permeating Monday’s summit seemed to banish the doubts that marked recent NATO gatherings. But at the same time, an expanded to-do list has some experts worried that a focus on answering the post-Cold War “purpose” question could put the alliance at risk of losing its focus on its core strengths.

“It’s not so much a question now of NATO’s relevance, but of NATO being drawn in too many directions,” says Ms. Kendall-Taylor, who served as deputy national intelligence officer for Russia and Eurasia in the National Intelligence Council.

“It’s still first and foremost a collective defense structure, and especially with the sustained challenges Russia poses, I think some members in particular want to be sure the focus remains on that.”

Mr. Biden appeared to acknowledge those concerns Monday by briefing his colleagues on his aims for the much-anticipated summit he’ll hold with Russian President Vladimir Putin in Geneva Wednesday.

He also met separately with the leaders of the three Baltic states – Estonia, Latvia, and Lithuania – and pointedly had a brief conversation on the summit sidelines with Polish President Andrzej Duda, all part of his messaging to Mr. Putin about the American commitment to NATO’s eastern flank.

The three Baltic states and former Soviet republics have felt most acutely the revanchist military actions of Mr. Putin’s Russia, including in neighboring Ukraine and in Georgia.

But it was at another bilateral meeting, the one Mr. Biden held with Turkish President Recep Tayyip Erdoğan, in which the president sought to underscore his conception of NATO as an “alliance of democracies” with a critical role to play in stemming a rising global authoritarian tide.

Mr. Biden wanted to finalize plans for Turkey to provide security for the Kabul airport after NATO’s departure, air the prickly topic of U.S.-Turkish differences over security in northern Syria, and discuss Turkey’s complex relations with Russia before Wednesday’s summit.

But perhaps the strongest reason Mr. Biden granted Mr. Erdoğan a high-profile sit-down was to secure Turkey’s slipping anchor in the “alliance of democracies,” some analysts say.

“The Biden administration’s policy towards Mr. Erdoğan is to keep Turkey in NATO and democracy in Turkey vibrant while Erdoğan is on the scene,” says Soner Cagaptay, director of the Turkish Research Program at The Washington Institute for Near East Policy.

The Biden White House “has digested the fact that Erdoğan’s Turkey is in deep with Putin,” he says. But, he notes, “Turkey and Russia are not allies, their relations are complex, with cooperation and deep disagreements” – and the U.S. wants to stem any tendency for those relations to get any closer.

Yet while U.S. worries about Turkey’s drift are not new, what is new here is Mr. Biden’s willingness to directly address democratic backsliding in a key regional ally.

“In the past U.S. presidents paid symbolic lip service to democracy and freedoms in Turkey, but this time is different,” says Mr. Cagaptay, author of the just-published “A Sultan in Autumn,” about Mr. Erdoğan’s rise and recent decline as leader.

Mr. Biden needs to address “democratic transgressions” among America’s partners if his vision of democracies effectively addressing the 21st century’s biggest challenges is to be believed at home and abroad, Mr. Cagaptay says.

And Mr. Erdoğan, in dire need of the U.S. president’s imprimatur to jump-start American and other foreign investment in Turkey and to revive a moribund economy, he adds, is at least willing to listen if that’s the price for getting a photo with Mr. Biden.