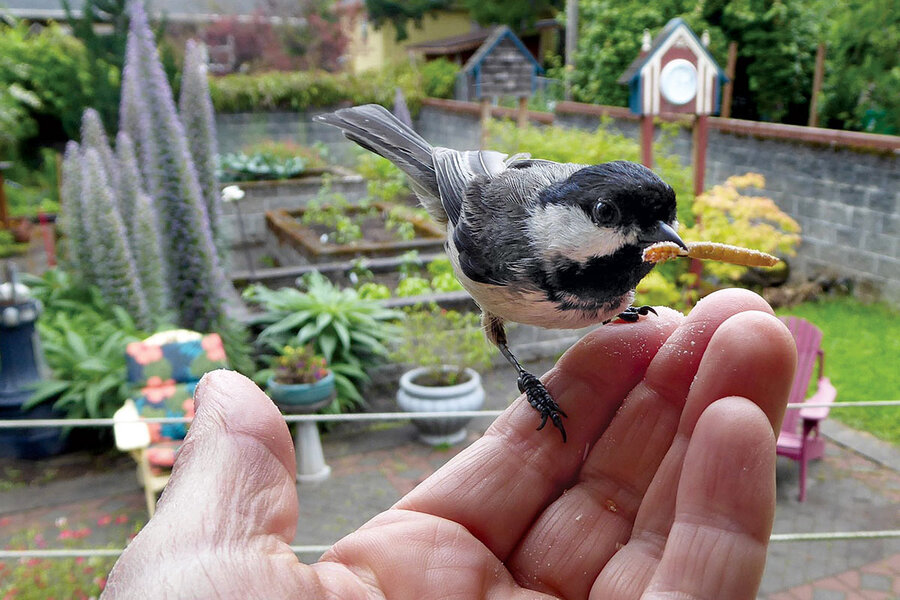 The thing about chickadees is that none of them veer off the template much. I couldn’t tell ours apart until a few years ago, when one of them showed up with an injured foot. It was pink and swollen and he kept it balled up in his belly feathers. The next spring he was back in business, all healed up and a couple toes short, and that’s when we found out he was Studley, because Marge was in the nesting box, hammering away on the grass mattress, and he was bringing her snacks. That’s the standard chickadee division of labor.

After a few weeks, something changed, and suddenly Marge and Studley were hauling in bugs and grubs every few minutes, all day long, dawn to dusk. Apparently they made new chickadees out of them, because that was the next thing to come out of the box. But it seemed to take a toll. The industrious and dedicated Studley looked worn to a frazzle by June.

I cracked the window open and edged my palm out onto the sill with a mealworm in it. Studley definitely saw it. Studley definitely wanted it. He made feints at my hand, hovering. Then he landed on the sill, weighed his responsibilities against his caution, stabbed at the worm, and rocketed off as though he’d swatted a tiger’s nose on a dare. A half-hour later he was landing on my fingers.

Studley is a tiny thing: He wouldn’t tip a scale with a peanut in the other pan. I was sure my life had just been made complete, sanctified by the blessing of bird feet.

But if something can get more complete, it did.

They say there are wormholes in space-time, portals to other universes. I was already smitten, but it wasn’t until the next day that my entire heart tipped into that gravity well. I was outside weeding. When I stood up to stretch, I heard a flibbet of wingbeats, and there was Studley, on a twig 8 inches from my face. He tilted his head, back and forth, sent me one bright black eye, then the other. And I fell through the mealwormhole into Studley’s world.

I wasn’t anywhere near his window. And I was wearing a hat. But he knew me. Had he been looking at me all this time, even as I was looking at him?

I stand in the garden with my hands relaxed at my sides, and a bird tucks into the cup of my fingers. I get out of my car and a bird lights up the closest branch, and dips over to my hand, his feet as important and small as punctuation. He doesn’t weigh any more than a held breath.

And he’s smart. If I’m inside, he figures out where I am in the house and hovers at that window. He’s taught me his “chip!” note. He lands on my friends, too. He’s an ambassador of joy.

I know what he likes me for. But is it love? I want to get this right.

Many sober voices say all love is self-interest. The sober voices are measured in their assessment. They manage risk. They keep their hearts on a short leash, safe from disappointment.

I don’t know just where a love story begins. But maybe love is the name of the charged ether that joins our worlds. I do know I’ve won the trust of the smartest, bravest, most valiant chickadee in the whole world, a world that can feel frantic, grabby, and barren. Does he feel a lift in his little bibbed chest when he sees me? Does he love me too?

It might not matter. I’ve got enough love for both of us.