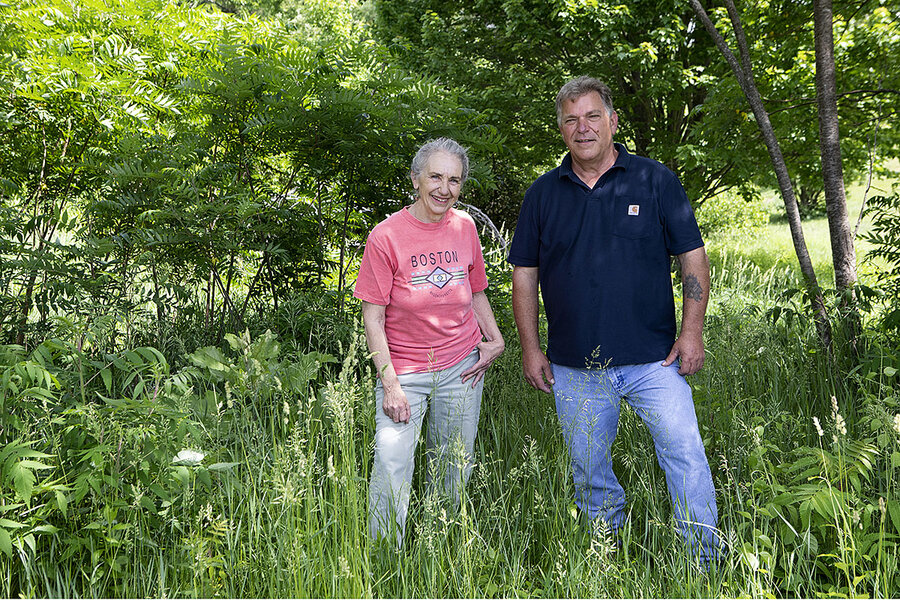 There was the Indian Tie Up in Henniker, an overhanging rock formation said to have been a site where Native Americans camped or spent winters; a mineral springs sacred site in Bradford; and an old chimney in the woods in Hopkinton rumored to hold ties to Native culture.

Before last summer, Mr. Peasley and Ms. Gould had visited only a few spots. That’s changed since they launched the Abenaki Trails Project in August 2020 and organized outings to explore each site with other tribe members and community partners. The project aims to create a network of sites and art installations that the public can visit to learn about Native American history and the continued presence of Native Americans in New Hampshire today.

History is only as useful as it is thorough. By bringing their history out of the shadows, Abenaki people paint a fuller picture of New Hampshire’s past – and present.

“I want to prove that not only did we live here, we still live here,” says Mr. Peasley, an artist who creates pouches, hats, and dance sticks in contemporary and traditional Abenaki style. He’s mulled over the idea of sharing Abenaki history more broadly ever since he heard state legislators years ago call New Hampshire a “pass through” state for Native Americans, an assertion he and others say is a misconception.

Last summer, he and Ms. Gould decided to take action. They approached select boards and historical societies in four towns, asking to work together to better document local Native American history. They’ve held hikes, paddling trips, and spoken at community events, and they plan to branch out to two more towns this summer.

On June 5 the Abenaki Trails Project and the Vermont Abenaki Artists Association launched an art show at the Mt. Kearsarge Indian Museum in Warner. On display is a birchbark canoe made in the traditional Indigenous style by Ms. Gould’s husband, Bill Gould, who is Abenaki, and Reid Schwartz, a local craftsperson. They sourced all their materials, including white birch bark, spruce root, and moss, within a five-mile radius of Warner.

Bringing the Native “presence into the light”

Even in its early stages, the Abenaki Trails Project is “raising consciousness, particularly among non-Native people,” says Robert Goodby, an archaeologist and anthropology professor at Franklin Pierce University in Rindge, New Hampshire, who was invited to attend several of the group’s events to offer an archaeological perspective.

“The Native people have always known that they have a long history here and that these sorts of sites exist. For most non-Native people, it’s very easy to spend your whole life living in New Hampshire and never really think about the Native presence here, and I think this is a way of bringing that presence into the light, community by community,” says Dr. Goodby, who has found evidence in archaeological digs of Indigenous people living in New Hampshire for over 12,000 years.

The Abenaki Trails Project aims to highlight positive relations between historic Native Americans and European settlers and dispel the myth that Native Americans disappeared from New England – or that they were primarily antagonistic toward settlers.

“We want people to understand that Abenaki weren’t just what you read in history books, the murderers and marauders. They helped the colonial settlers also or they wouldn’t have known how to plant corn, how to survive the winter,” says Mr. Peasley on a recent afternoon at the Mt. Kearsarge Indian Museum art show, where some of his handcrafted hats are on display.

Other efforts led by Native Americans in the region are working toward similar goals. In Vermont, the Indigenous Heritage Center recently expanded an exhibit showing the continual presence of Native Americans in the region. And members of the Cowasuck Band of the Pennacook-Abenaki People are involved with an effort in Boscawen, New Hampshire, to update a statue of Hannah Duston, a 17th-century English woman depicted holding the scalps of 10 Native Americans she killed. The group wants the site to include a memorial to the slain Indigenous people, more information about Abenaki history, and an explanation about why the Colonial woman was held captive.

“Because these initiatives are going on all over New England, I’m hopeful that it will help change dialogue,” says Christoph Strobel, author of “Native Americans of New England” and a history professor at the University of Massachusetts Lowell. “It’s always a matter of how much mainstream society pays attention. I think Indigenous people – for the last 400 years of New English colonization and 500 some years of other colonization – have tried to make their voices heard.”

Living in a “dual reality”

One of the highlights of the Abenaki Trails Project for Ms. Gould, a basketmaker, is how enjoyable the exploratory outings are, which bring together Native Americans and non-Native community partners like historians, geologists, and archaeologists. “It’s been a lot of fun,” she says.

Yet Ms. Gould still struggles, she says, with feeling like she lives in a “dual reality” where friends know she’s Native American, but in broader society “a lot of people want to think that’s not true or you’re trying to appropriate someone else’s culture.”

It doesn’t help that there are no federally recognized Native American tribes in New Hampshire. The Nulhegan Band that Mr. Peasley and Ms. Gould are members of is headquartered in and recognized by Vermont.

And only about 0.3% of New Hampshire residents, or roughly 4,000 people, identify as American Indian or Alaska Native alone, according to the U.S. Census Bureau. Another 1.8% of state residents identify as two or more races, which could include Native Americans.

Having Abenaki people lead an effort like the Abenaki Trails Project is important, says Dr. Goodby. “For a long time if something was being said about Abenaki history and culture to the public, it was being said by people like me, by white anthropologists. I think this is a very healthy development.”

Volunteers with the Abenaki Trails Project are having difficulty managing all the requests for speaking events. At the same time, they have found art installations and historical plaques more costly than expected – and grant funding for them harder to secure than they anticipated.

But the project’s impact continues to ripple out. Heather Mitchell, executive director of the Hopkinton Historical Society, says that seven years ago the society created an exhibit including a paddle trip with points of interest along the Contoocook River. None of the sites included any Native history. This summer, after participating in outings with the Abenaki Trails Project, the society plans another paddle trip that will focus exclusively on Native American points of interest. They’ll also open an exhibit related to the Abenaki Trails Project on June 17.