A very simple way to remove hemp from trees and shrubs on the site, using just one tool – sledgehammers.
Greetings to all homemade colleagues, as well as everyone who is interested in homemade products and simply various interesting ideas and tips!
Today, I just want to share with the readers one interesting idea concerning the removal of hemp in summer cottages and backyard plots. This idea consists in a method of uprooting hemp from trees and shrubs, using just one sledgehammer.
I must say that this idea came to me about ten years ago. And when I tried to uproot hemp in this way, it turned out to be very effective. Since then, I quite often use this method, and also, if possible, propagandize it among my friends and acquaintances.
As I have already noted, the main advantage of this method of uprooting is that it only needs one tool – an ordinary sledgehammer (and of course good health and a certain physical strength). At the same time, you do not need any other tools, no shovel, no crowbar, no ax, which are usually used when lifting hemp.
True, it should be noted that this method has certain limitations. So, if you have to uproot fresh stumps from trees, then this method is best used if the stumps are not very large (no more than 10-12 cm in diameter). If the stump is larger, then it will be very difficult to uproot it with one sledgehammer, since the roots of the fresh hemp are still very strong. Therefore, in this case, it is better to uproot it using the traditional method, by digging out large roots and chopping them up with an ax.
It's another matter if there is no need to uproot the stump right away, but you can wait for at least another two or three years, when the stump will no longer be fresh, but two or three years ago. In this case, the roots will be already rotten and not very strong. Therefore, it is quite possible to loosen such a stump with the help of blows of a sledgehammer and pull it out of the ground, literally like a sore tooth. The same applies to fresh stumps from small trees (cherries, plums, young apples and pears, etc.), since their roots are also not very large. Although, again, if possible, it is better to wait a few years and uproot the already not very strong rotten stump.
Thus, this method of uprooting is especially suitable for two-year, three-year or older tree stumps. Hemp from shrubs, quite easily writhing with a sledgehammer in any form, including fresh ones.
I, on my site, especially often have to uproot hemp from cherries and plums, since these trees have to be renewed every fifteen to twenty years. They grow from the undergrowth, and therefore, I constantly grow new, young trees, and I gradually cut down the old ones. At the same time, there is no need to uproot the stumps immediately after cutting the tree.
Therefore, when I cut down another old plum or cherry, I usually leave a stump 10-15 cm high. And then, after three or four years, I quite easily uproot this a stump with a sledgehammer.
Well, now, I will show with an example how you can uproot such a stump with a single sledgehammer.
I just have a stump from a plum that was cut down three or four years ago. 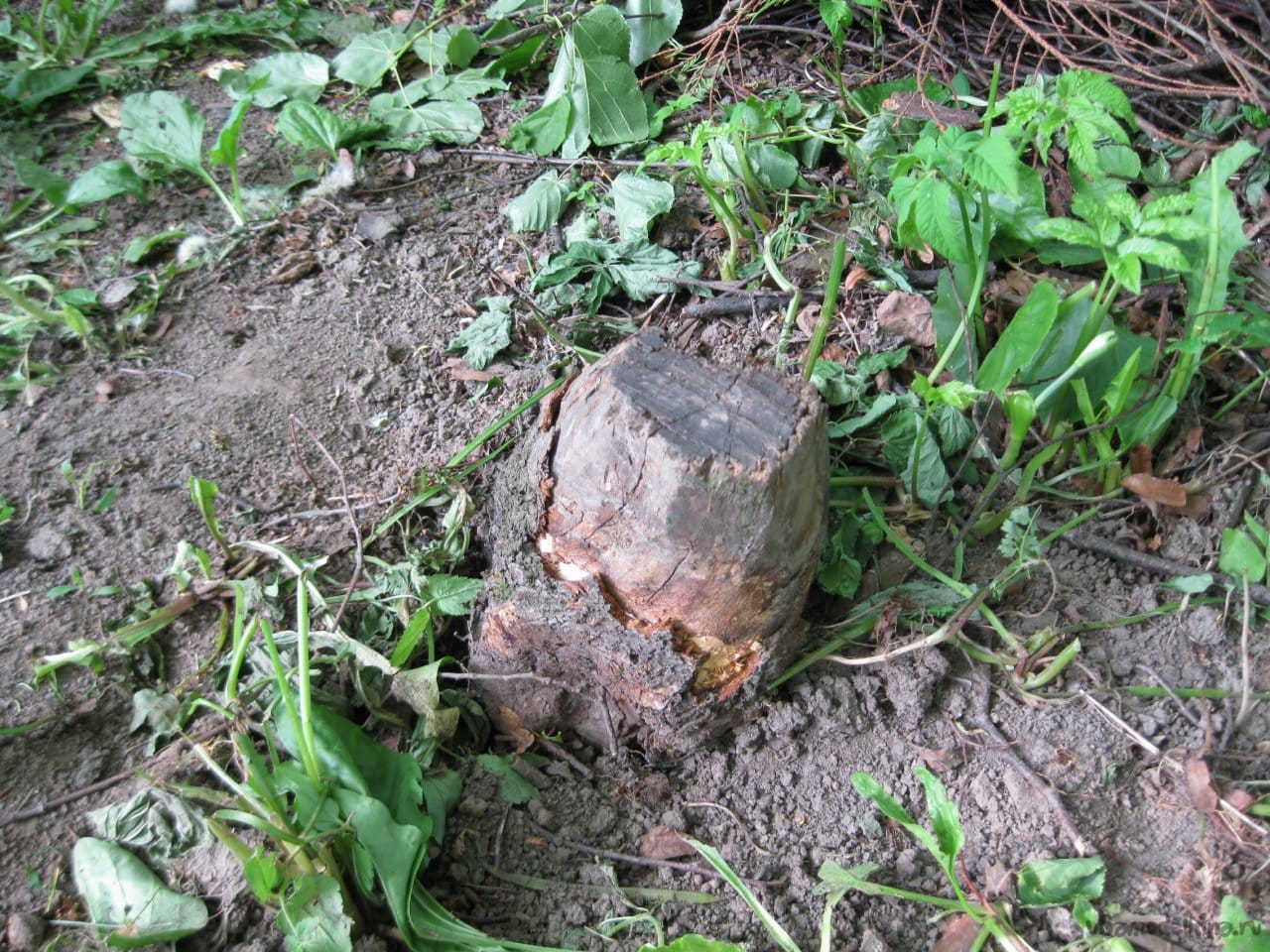 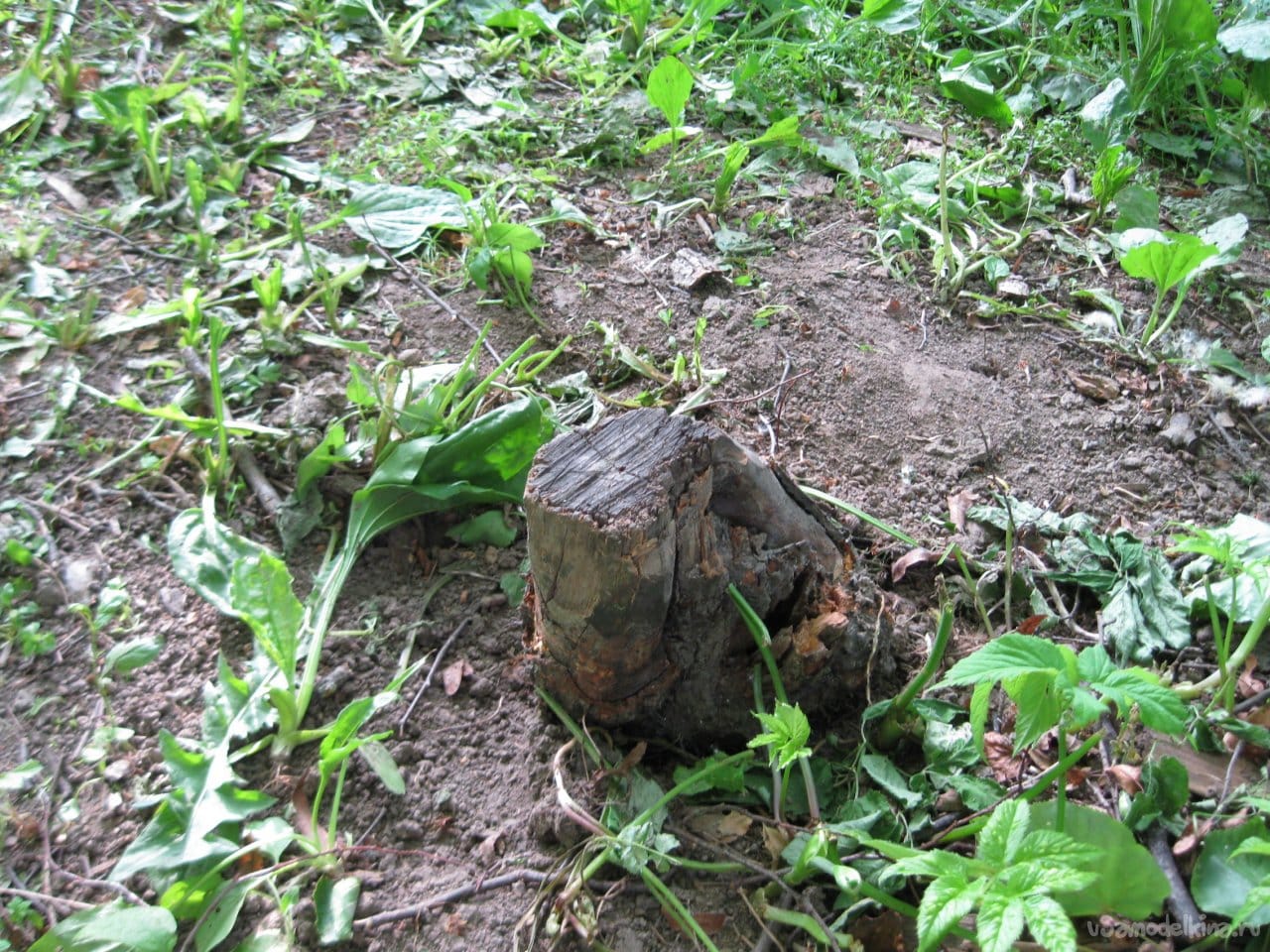 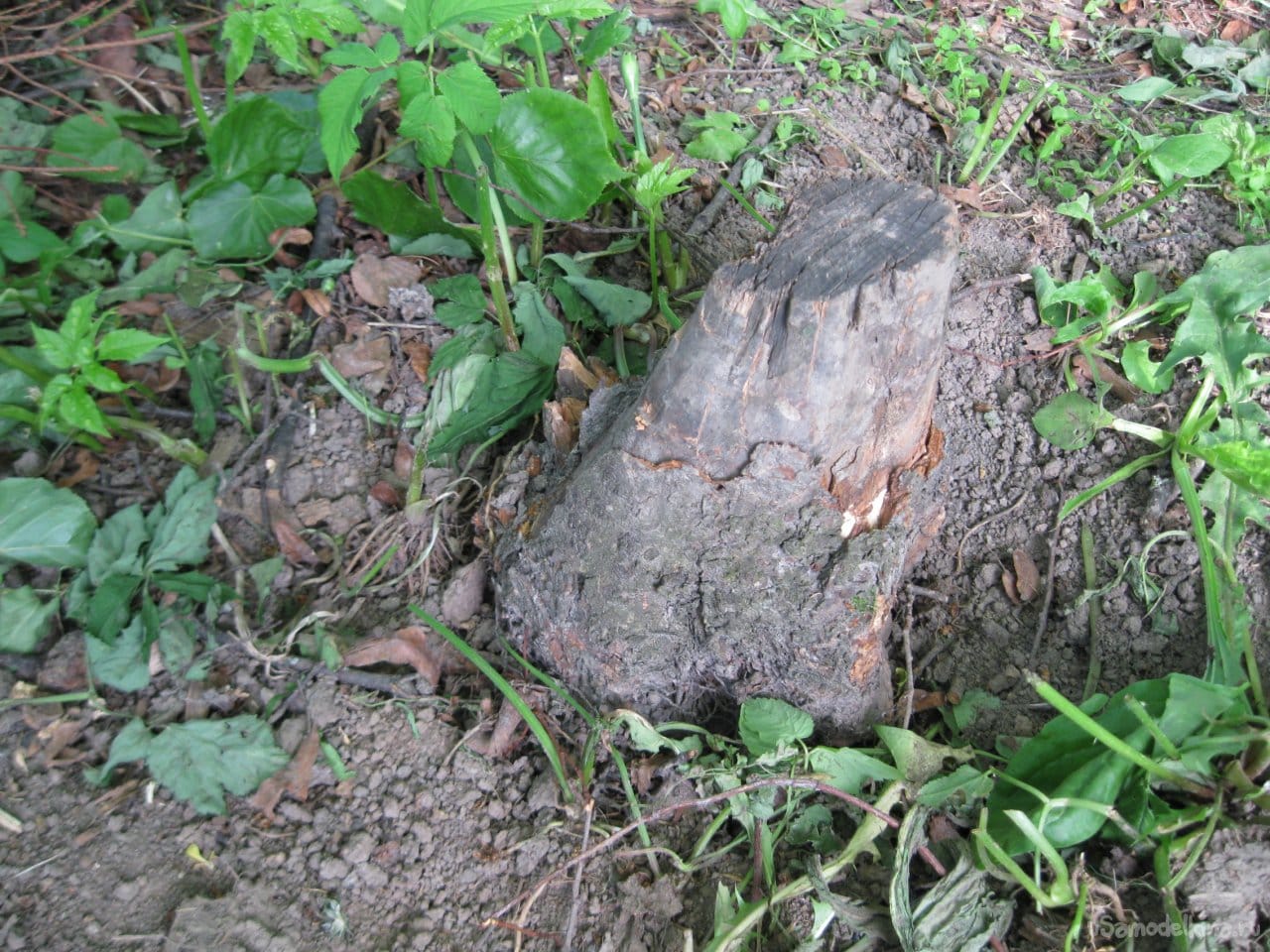 By the way, in order to understand how firmly this stump is held in the ground, I have already tried to knock on it with a sledgehammer several times. As a result, it seemed to me that it was not holding on very tightly and it was time to uproot it.
It should be noted that not long before that, I easily uprooted two smaller hemp in this way.
This stump will require a little more effort, but I think it will be quite easy to uproot it with just a sledgehammer.
Grubbing the hemp.
So, we need a sledgehammer to work.
It must be remembered that the heavier the sledgehammer, the more efficient and quick the work will be. But on the other hand, a big and heavy sledgehammer and work harder. Therefore, I use a medium sledgehammer.
Step 1. Making a series of blows with a sledgehammer, on each of the four sides of the hemp.
Step 1.
To start uprooting, select one of the sides of the hemp and we inflict a series of blows on it with a sledgehammer from three, four blows, to five, six (although more is possible). 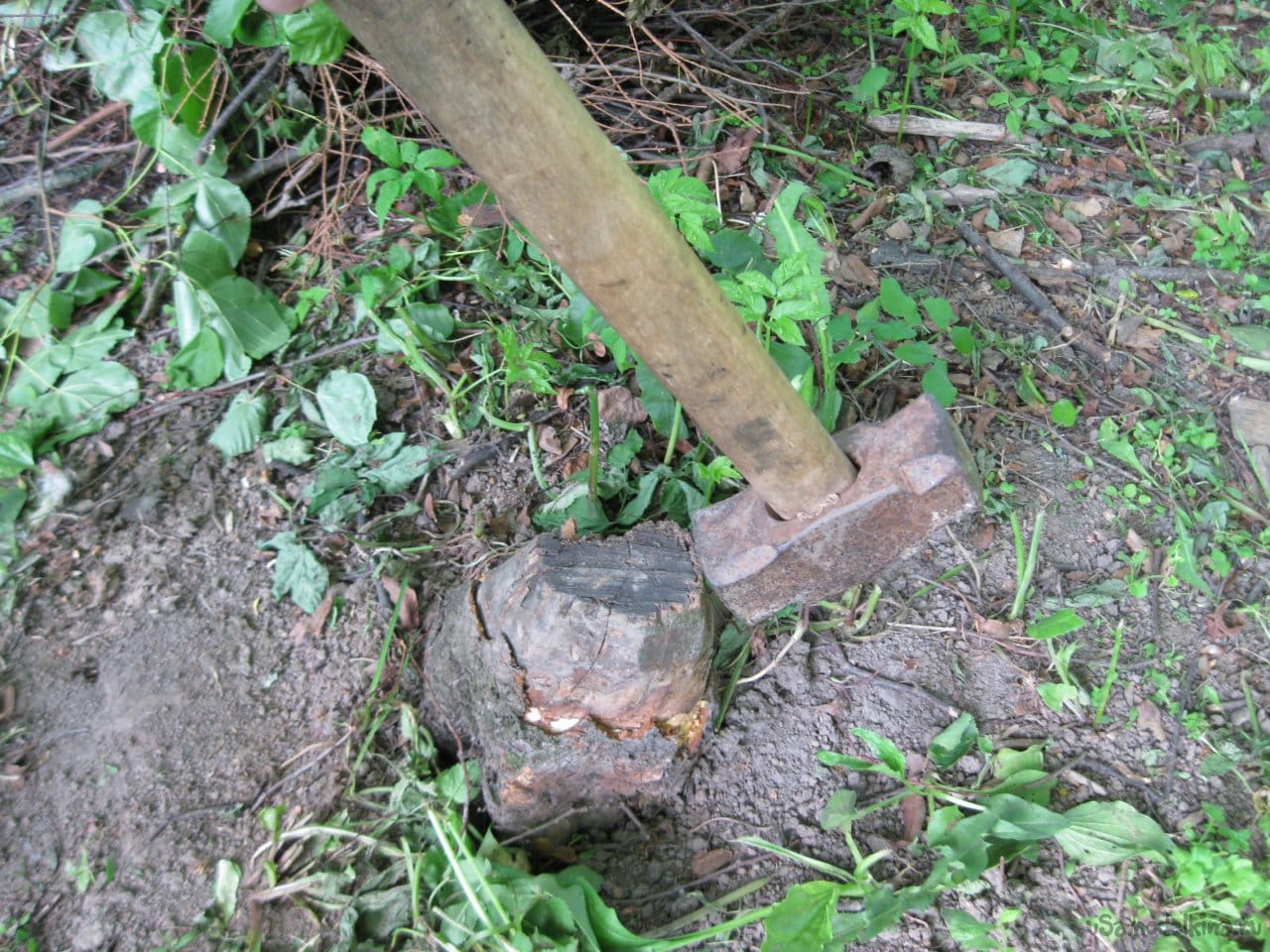 Step 2.
Then, turn 180 degrees and apply the same series of blows from the opposite side of the hemp. 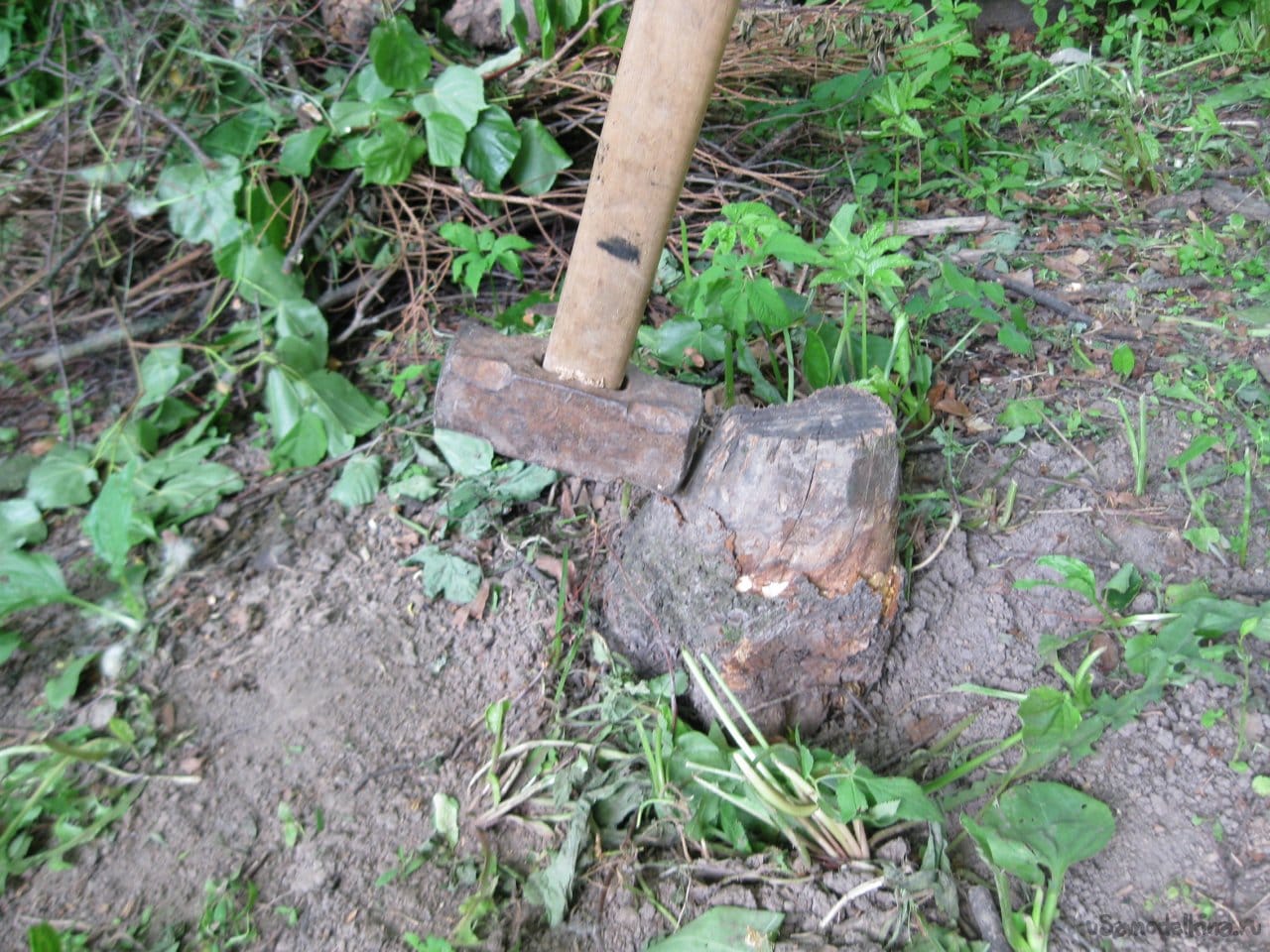 Step 3.
After that, we turn already 90 degrees and inflict about the same number of blows already from the side.
Step 4.
Well, then again we turn 180 degrees in relation to the lateral side and deliver a series of blows on the opposite side of the hemp.
Thus, this technique of uprooting hemp consists in the fact that we inflict a series of blows with a sledgehammer on each of the four sides of the hemp (in two vertical, perpendicular planes).
The result of this is that the roots are underground from different sides of the hemp , do not withstand shock loading and are torn. By the way, after we made one cycle of four series of blows on the hemp from different sides, it can be seen that a hole or hole has formed around the hemp, and the stump itself has significantly crawled out of the ground. 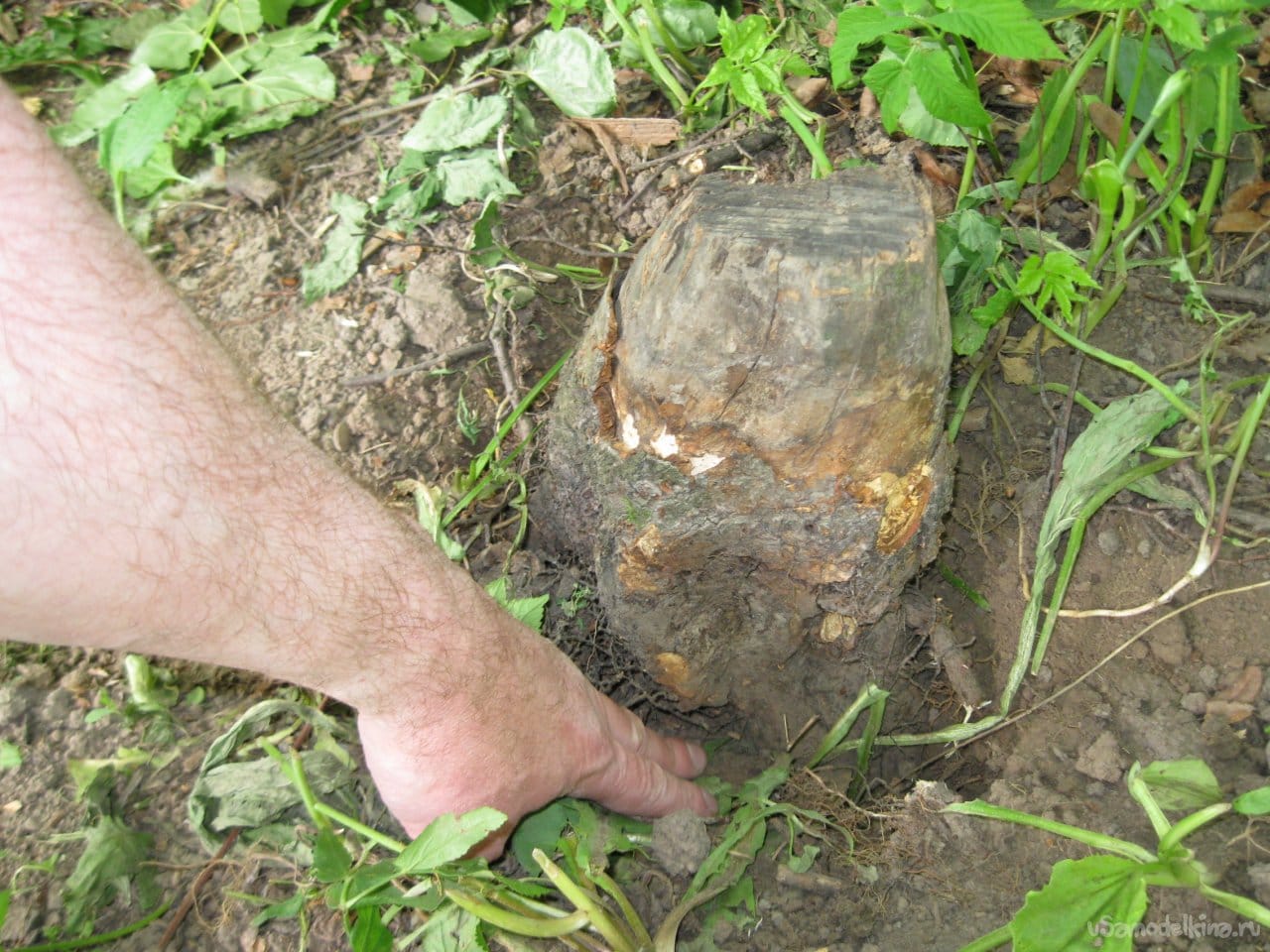 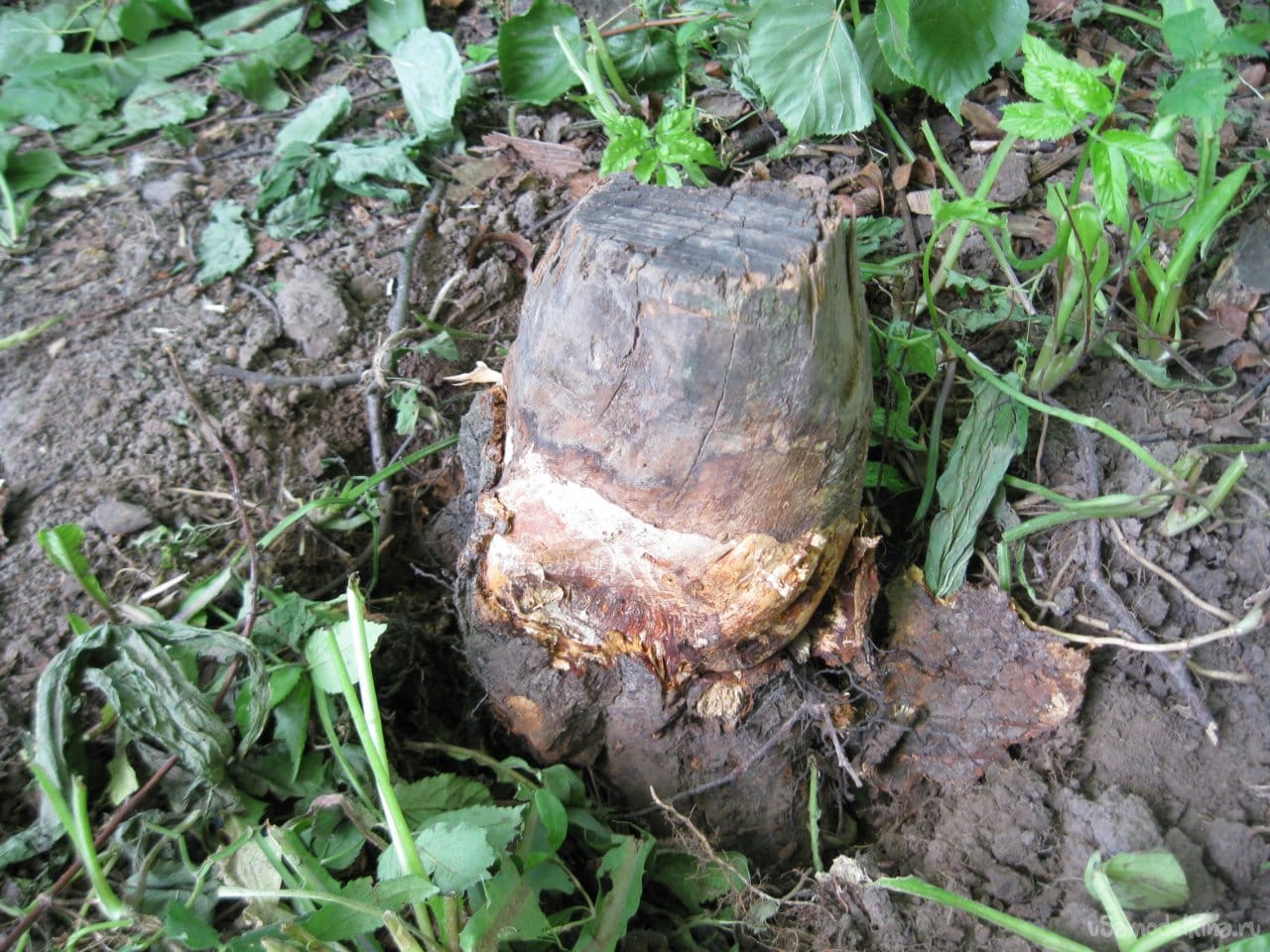 It feels good if you touch the stump with your hand. Although it is still firmly held in the ground, it is already quite noticeably staggering. 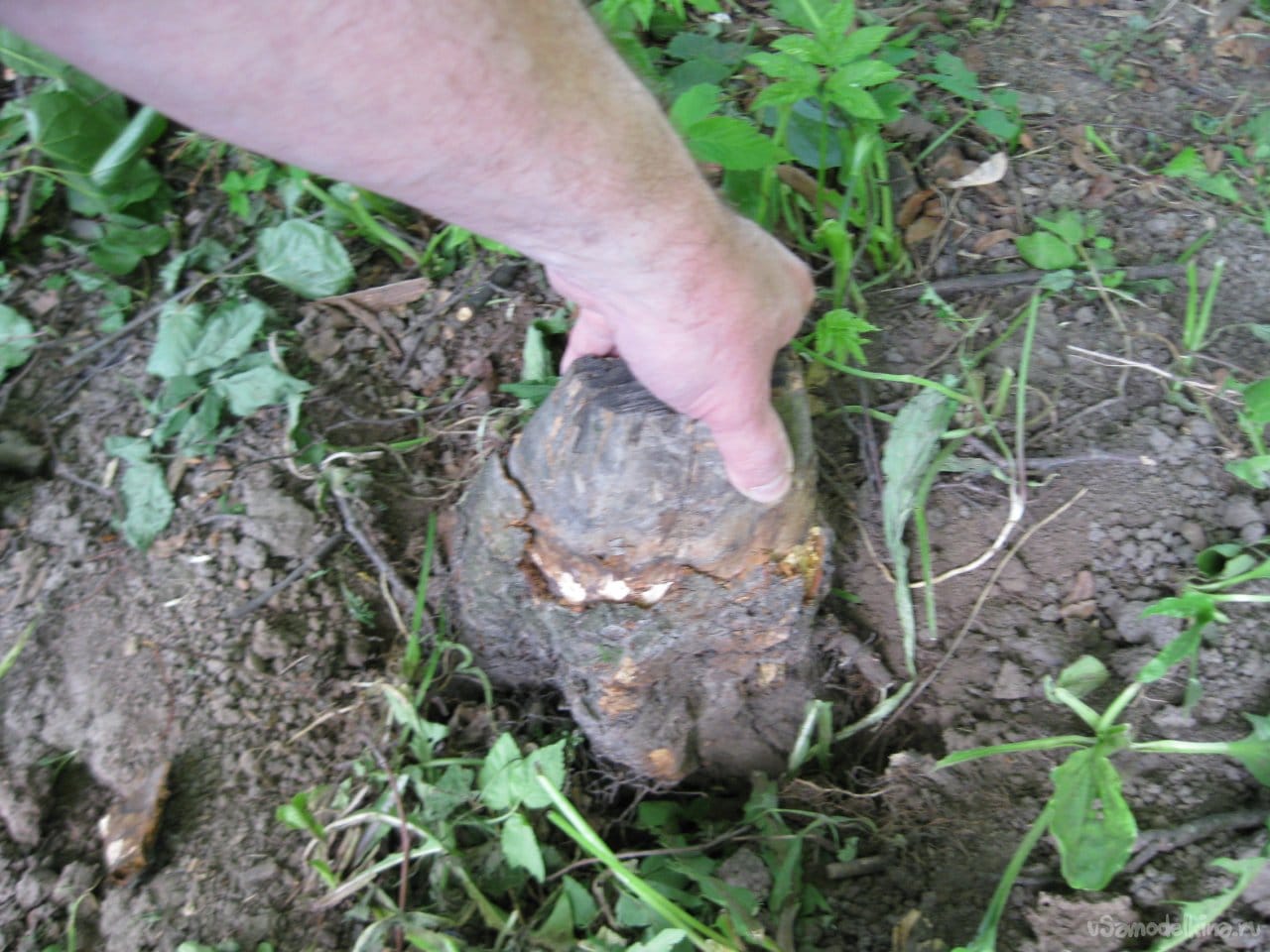 Besides In addition, scraps of roots are visible from below the hemp.
This means that we are on the right paths.
Stage 2. Repetition of the series of blows on the hemp (steps 1-4).
Therefore, we perform the second cycle, for which we apply four more series of blows on the mutually opposite sides of the hemp. That is, we repeat steps 1-4.
After that, we again try the stump with our hand. As a rule, in the end, all the roots around the hemp are already torn, except for one side, with which the largest root is still not completely torn.
Stage 3, Applying the last series of blows to the hemp.
Therefore, we inflict three or four final blows, from this side the hemp.
< img class = "aligncenter" alt = "How to uproot hemp using one sledgehammer" src = "https://usamodelkina.ru/uploads/posts/2021-06/1623733390_izobrazhenie-017.jpg"/> As a result the largest root does not withstand and also breaks, and we can easily pull the stump out of the ground with our hand.
Here is a view of the hemp we uprooted from different angles. 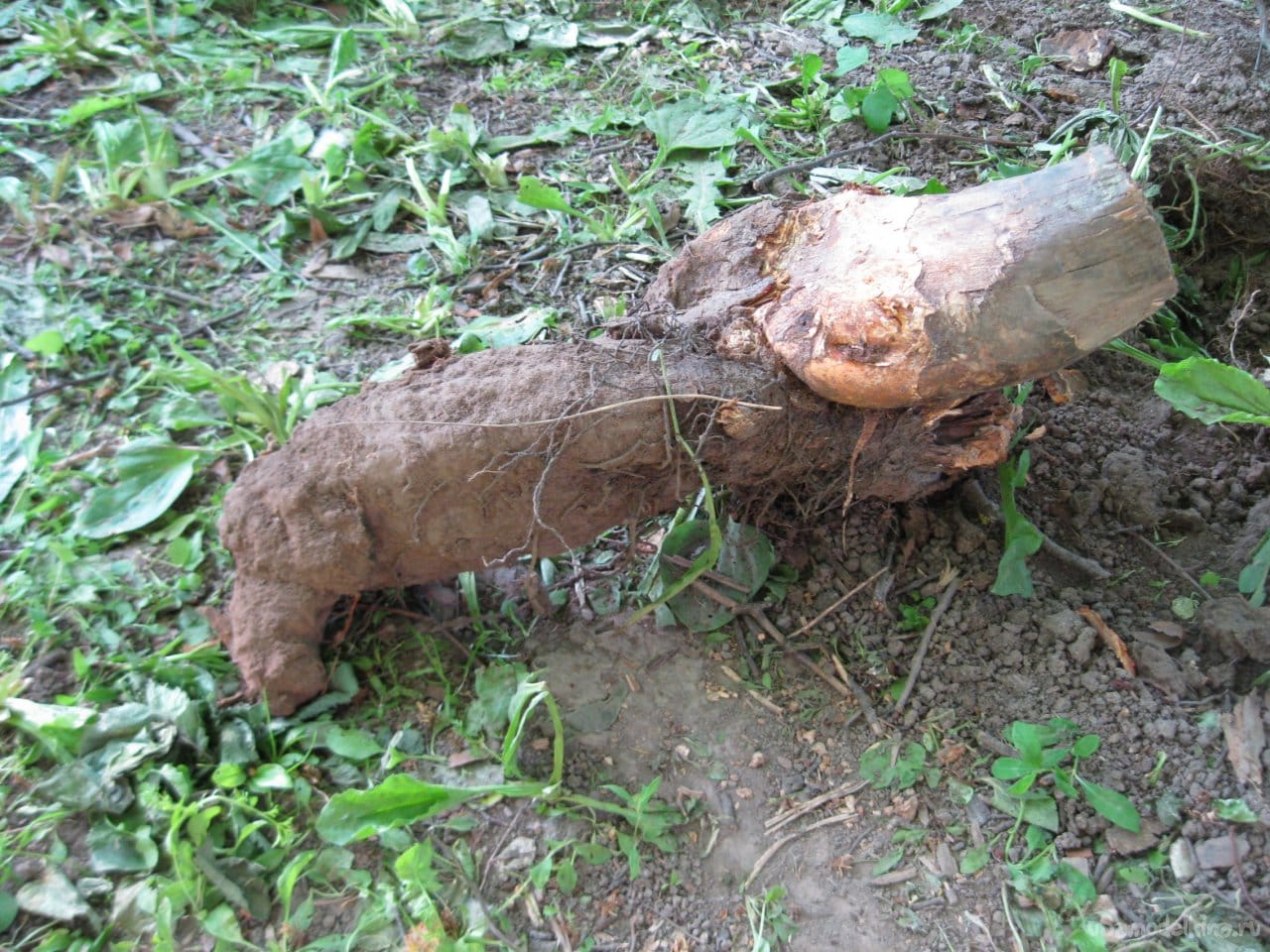 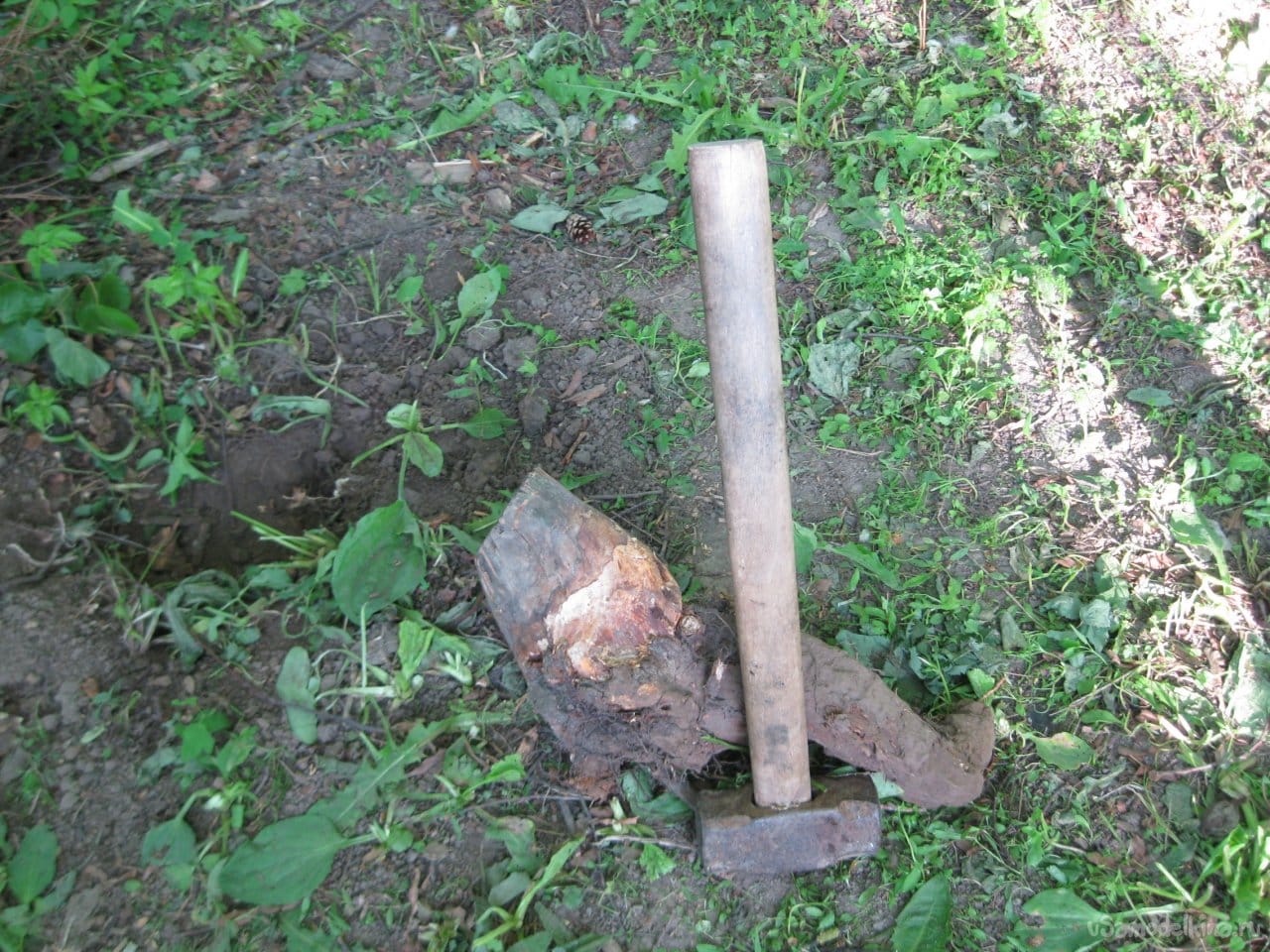 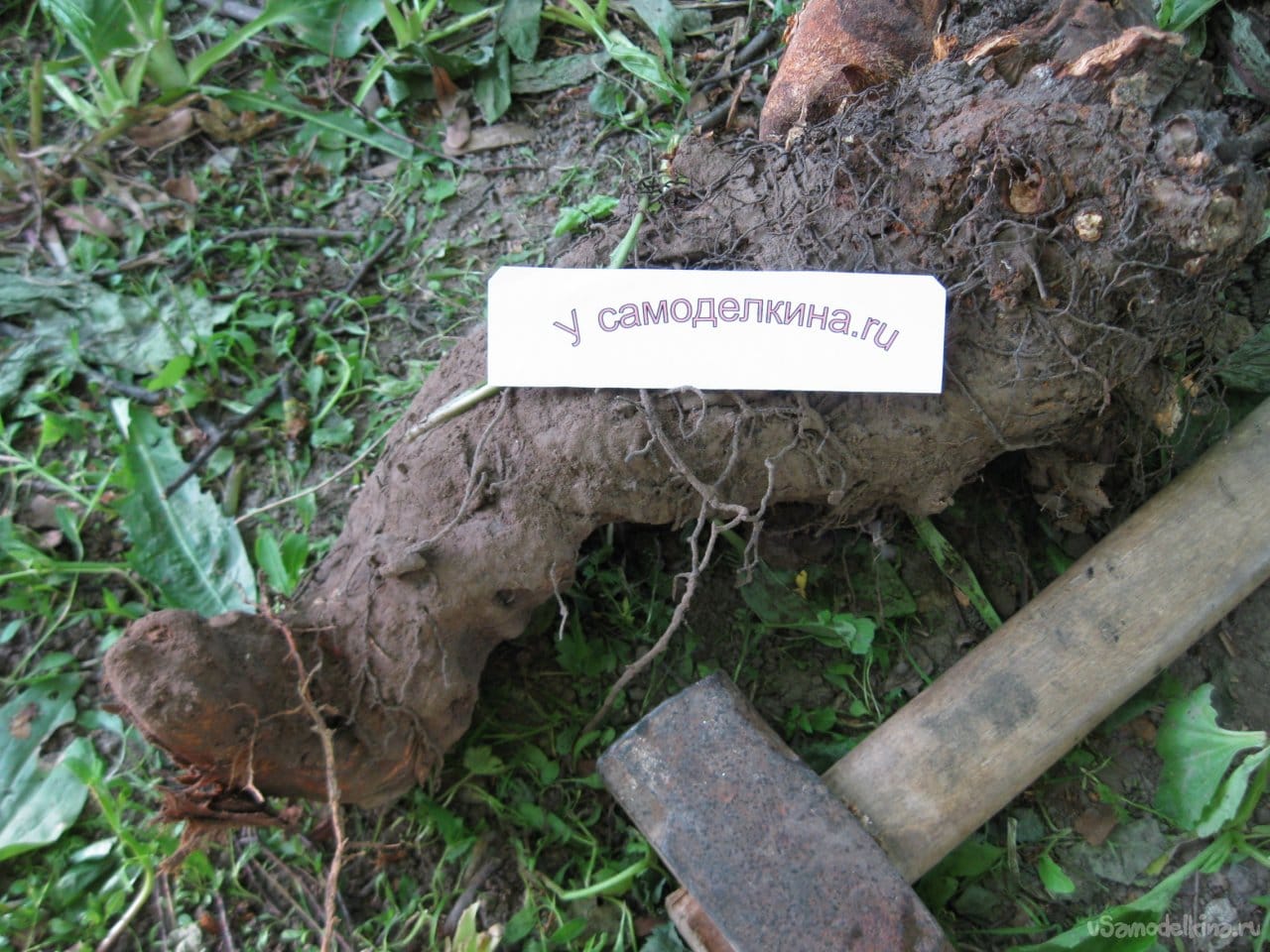 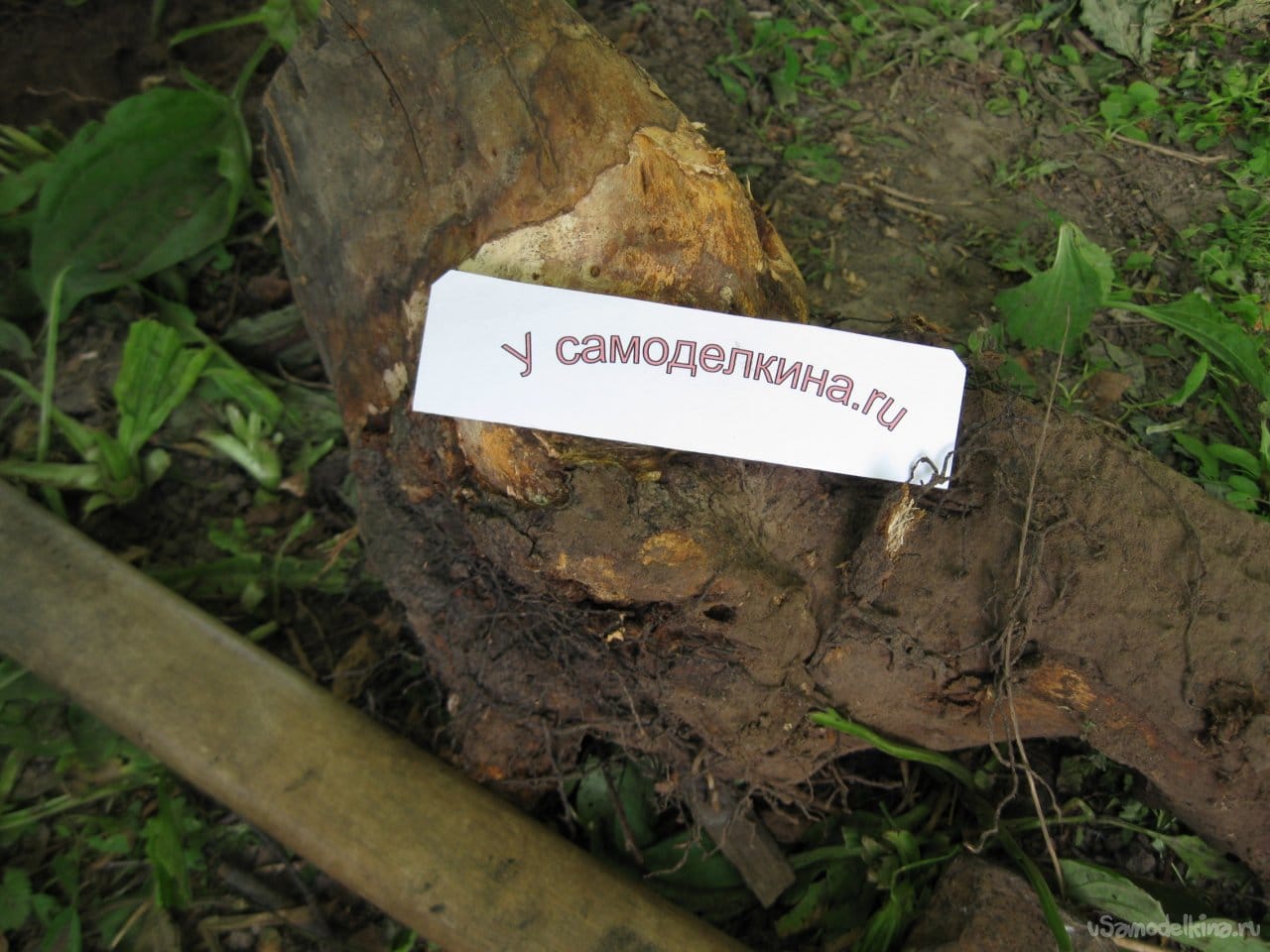 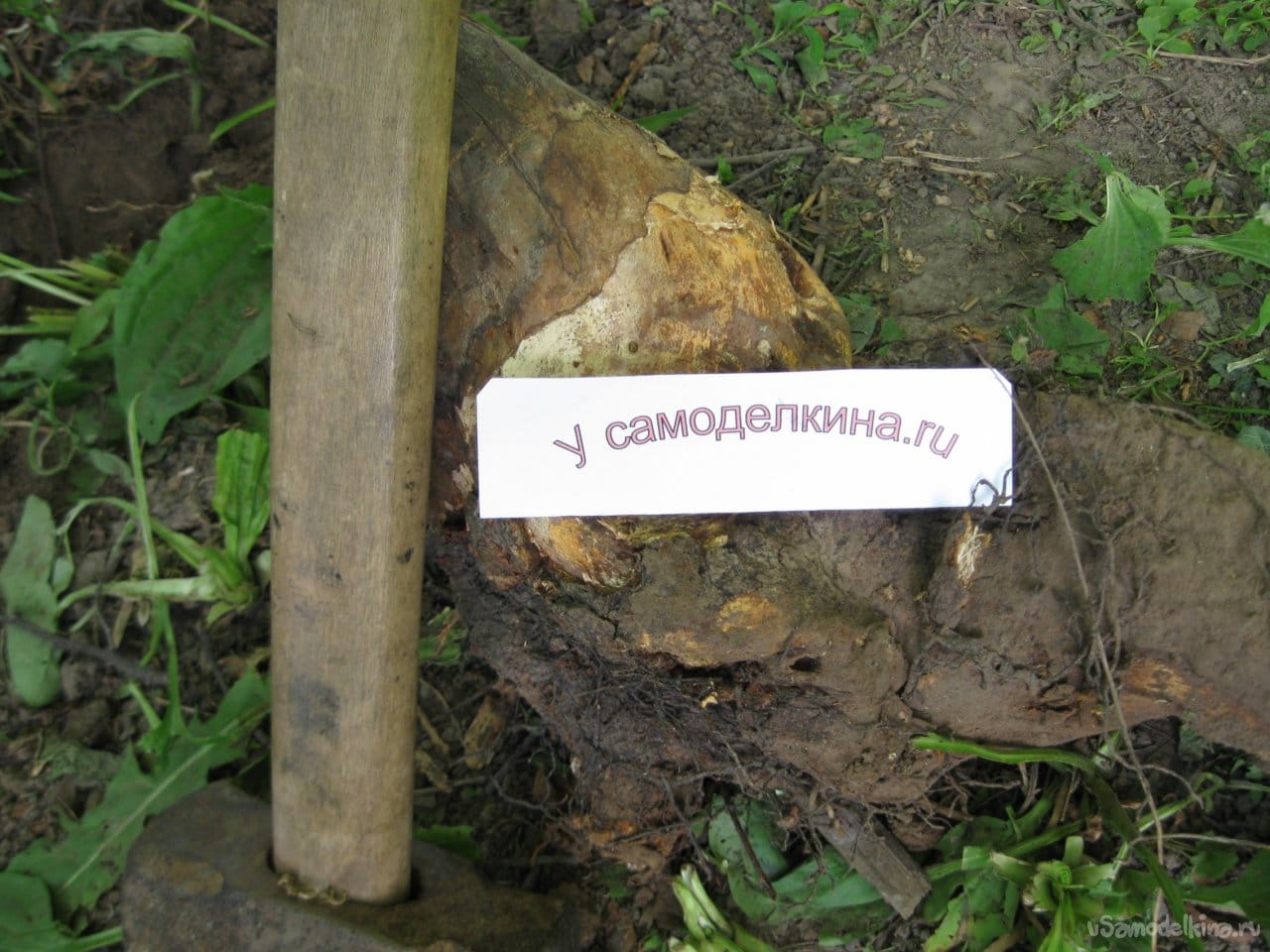 А so I have already put this stump to the rest of the uprooted stumps. 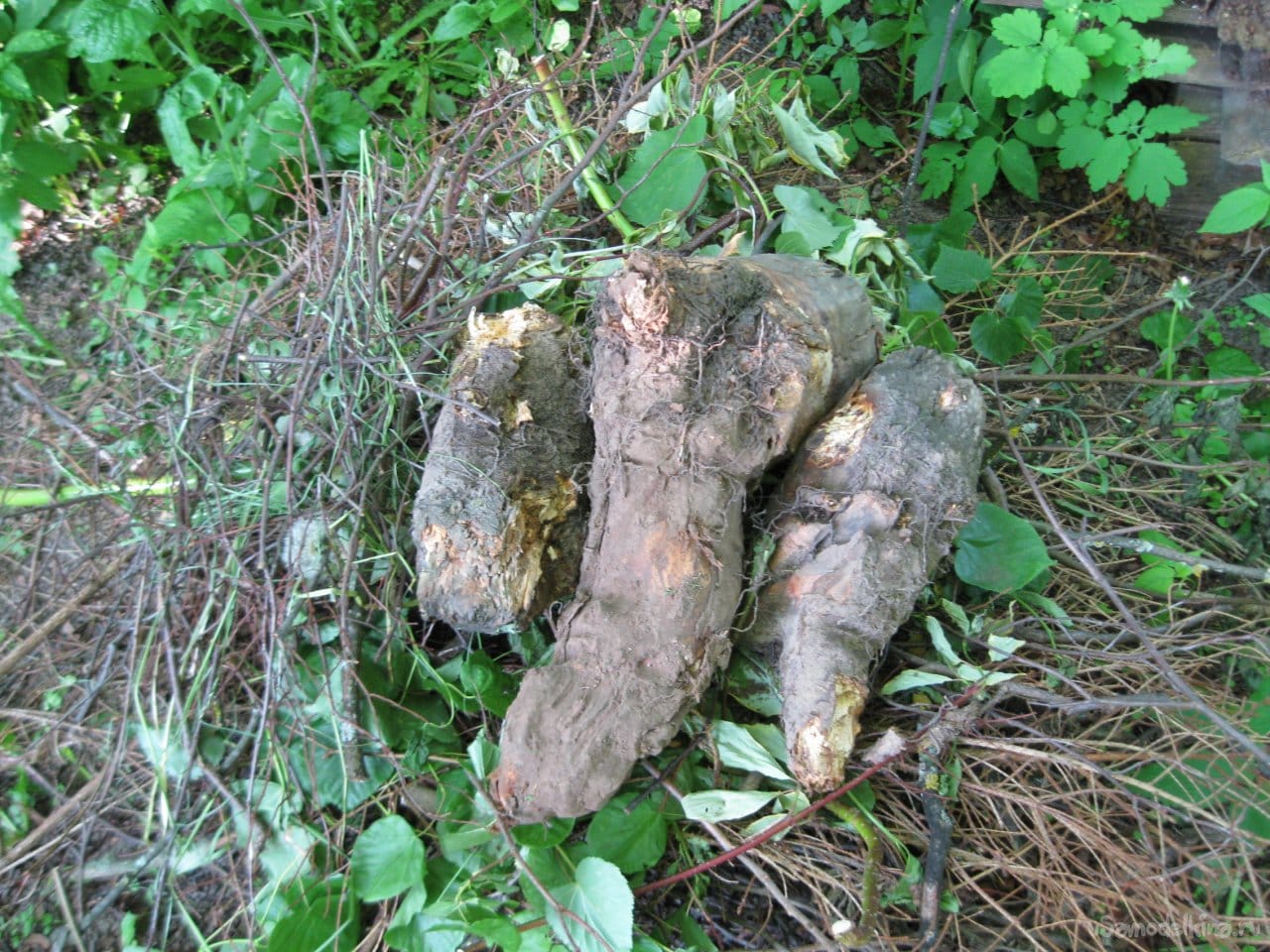 It remains to fill the hole from the uprooted hemp with earth, and trample and level the earth. 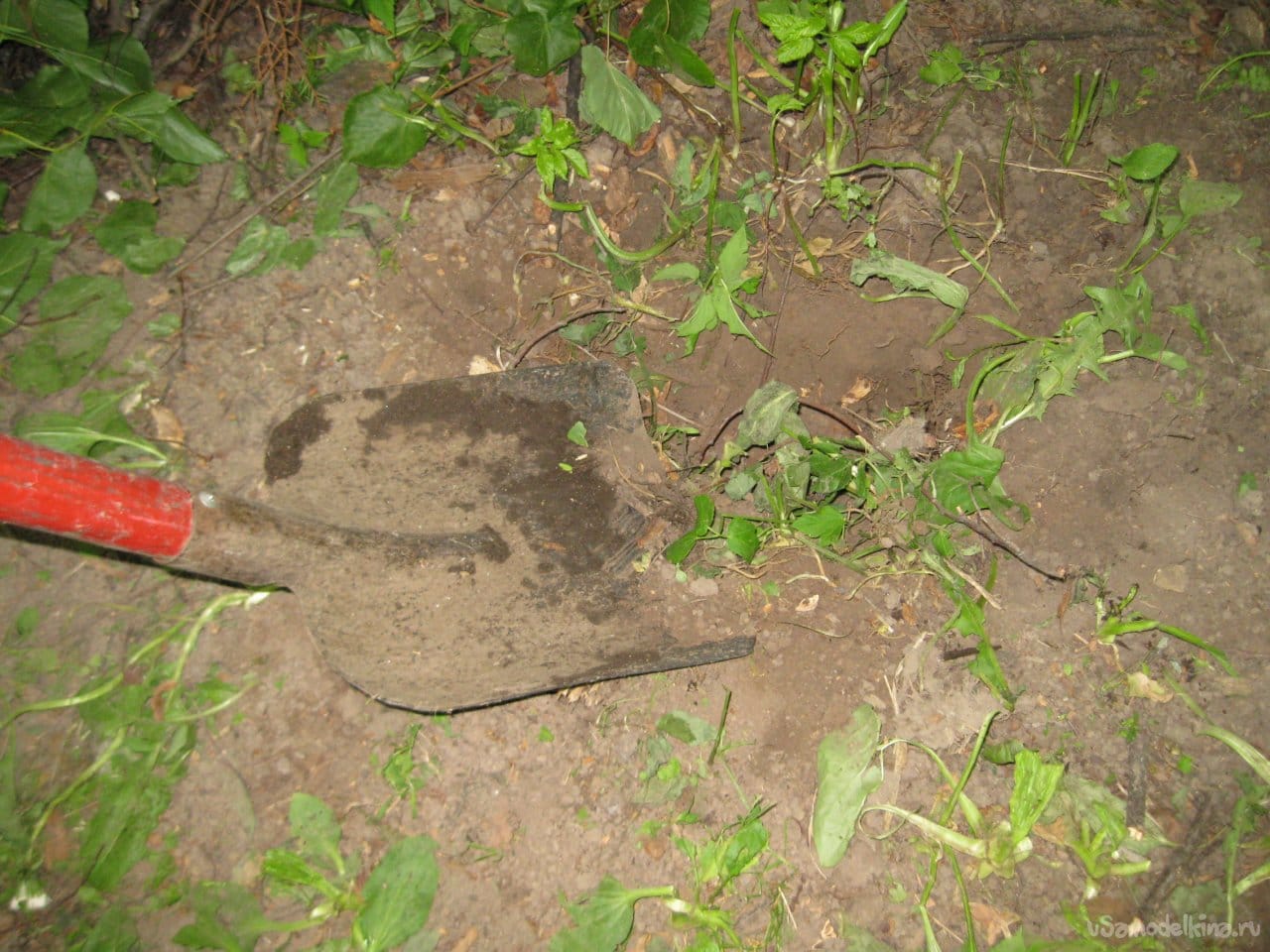 And now nothing reminds us of the hemp that used to be here once.
If necessary, you can dig up the ground at this place and arrange ridges. Or plant a new plant such as a shrub or tree.
I must say that I managed to uproot this stump quite quickly and at very low cost (in just two cycles, four series of blows on each side of the hemp).
However, hemp can be different. It all depends on the freshness of the hemp and its size. So, I have met hemp, with which I had to tinker a lot and wave a sledgehammer. To uproot such a stump, it was often necessary to produce about ten cycles from four series of blows.
Therefore, it can be stated that this method of uprooting, for all its simplicity, may not suit everyone. For example, for older people, as well as those with health problems, this method may not work, well, or it will require a very careful approach. But for healthy, physically strong people, this method may be quite acceptable. By the way, I also like this method of uprooting because it allows you to combine what is called pleasant and useful, that is, to uproot the stump and properly swing a sledgehammer, which in itself is a very good physical exercise.
It is not for nothing that exercises with a sledgehammer are in the arsenal of strength training for many athletes. Such exercises develop both strength and strength endurance very well. That is why I sometimes combine physical exercises (especially strength exercises), for example, with dumbbells and weights, and lifting hemp with a sledgehammer.