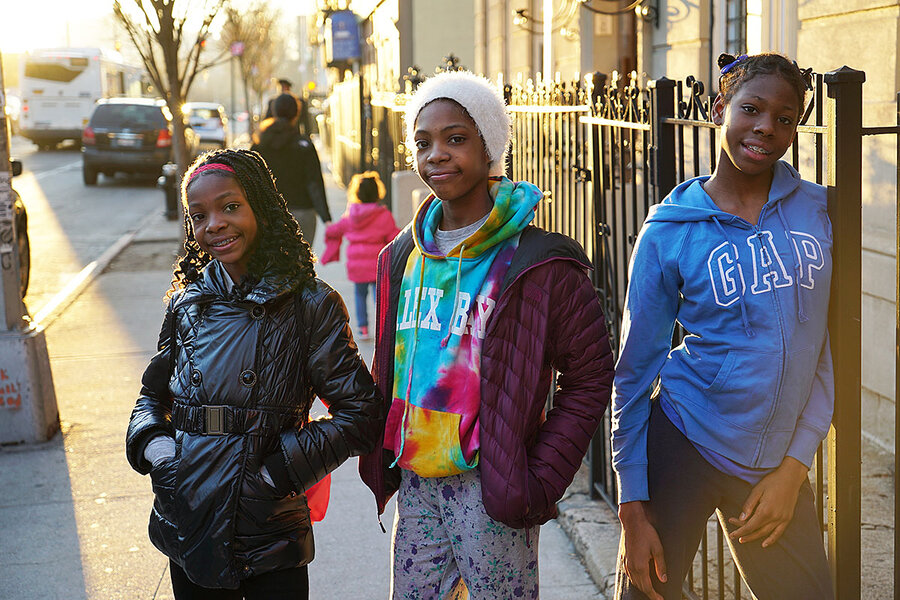 When judging exceptional athletes, we often consider their achievements and not their beginnings. We like to believe it would not have mattered where these prodigies came from or how they were raised. Two new sports-centric documentaries – “Sisters on Track,” about three New York girls who became junior track stars, and “City of Ali,” which traces Muhammad Ali’s upbringing in Louisville, Kentucky – reverse the standard narrative.

Co-directed by Corinne van der Borch, a Dutch filmmaker based in New York, and Tone Grøttjord-Glenne, a Norwegian documentarian, “Sisters on Track” follows the Sheppard siblings over a period of approximately three years as they come of age in and out of the media glare. In 2016, as the film begins, Brooke (then 10), Rainn (11), and Tai (12), having participated in the AAU Junior Olympic Games, are featured on the cover of Sports Illustrated Kids magazine as SportsKids of the Year. They are interviewed on TV’s “The View.” The girls and their single mother, Tonia Handy, who have been living in shelters, are gifted by entertainer Tyler Perry with a spacious, furnished apartment for two rent-free years.

Jean Bell, the girls’ track coach, is in many ways the film’s true centerpiece. A lawyer who has been coaching girls’ athletics for over 30 years, Bell, who was raised in the housing projects, recruited the sisters to join Jeuness Track Club, which she founded.

Attention given to star athletes often focuses on what they do on the field. But what can we learn – about them and about ourselves – from their relatable, non-superhuman side?

She knows the fleetingness of fame and speaks sadly of athletes she has “lost to the streets.” (The sisters lost a brother years earlier when he was shot by another teen.) She says, “Any girl I can help is a victory.” She doesn’t mean victory on the athletic field. She believes that education is the only way they’ll make it in life. An athletic scholarship to college will help get them there.

When Rainn’s grades slip, or when Tai is suspended for classroom insubordination, Bell is caring but volubly disappointed. She wants the girls to know they have it in them to be much bigger than this. “Sisters on Track” starts out as a flashy success story about headline-making kids but turns into something much more meaningful: a tribute to the value of being strong in spirit. (4 out of 5 stars)

Muhammad Ali, in his prime, was arguably the most famous and culturally noteworthy person on the planet. He had as much charisma as any movie star and a nonpareil athleticism that at times made even the brutal sport of boxing seem almost balletic. Born Cassius Clay Jr. in 1942 in a mostly segregated neighborhood in Louisville – he changed his name to Muhammad Ali when he joined the Nation of Islam in 1964 – he never turned away from his roots. “City of Ali,” directed by Graham Shelby, focuses on the globally televised public memorial on June 10, 2016, for Ali in Louisville – a memorial an ailing Ali himself planned with his wife, Lonnie.

The film is decidedly hagiographic but, in a time of heightened racial unrest, it’s worth being reminded of the fighter Ali’s origins. When he was 12, he discovered his new bicycle was stolen and told the white investigating policeman, Joe E. Martin, he was going to “whup” the thief. Asked if he knew how to box, he said no but it didn’t matter. Amused by this moxie, Martin, who was also a boxing coach, encouraged Ali to join the city’s only integrated gym. They became lifelong friends. A Black coach, Fred Stoner, was equally instrumental in forging Ali’s dance-and-jab style. When a consortium of 11 white businessmen backed his boxing ascent, it was a Black lawyer and activist, Alberta Jones, who safeguarded his contract.

Ali knew how beloved he was but his braggadocio was essentially performance art. He held a much more encompassing view of celebrity. The quote from Ali that opens the film could also serve as its testament: “I wish people would love everybody else the way they love me. It would be a better world.” (4 out of 5 stars)

Peter Rainer is the Monitor’s film critic. “Sisters on Track,” rated TV-PG, is available starting June 24 on Netflix. “City of Ali” is unrated and is available to stream via www.cityofali.com/watch.