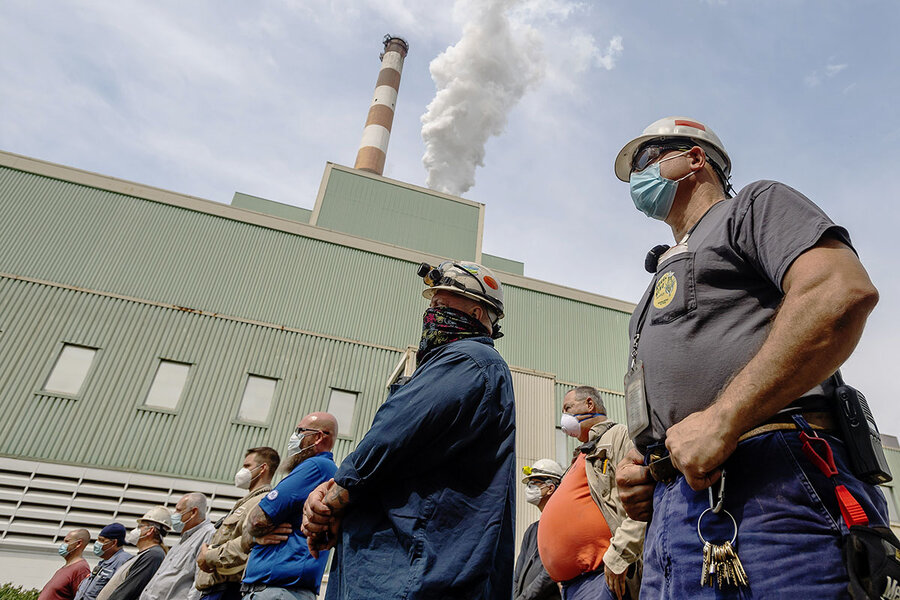 The absence of carbon pricing in the president’s proposals, scholars say, highlights the roadblocks in the American political system for major environmental action. It also raises questions about the possibility for bipartisan compromise when it comes to curbing global warming, at a time when environmentalists are worrying that the president’s climate initiatives will get dropped from any infrastructure bill in favor of across-the-aisle dealmaking.

“One of my takeaways from this is that any climate policy in the U.S. is hard,” says Barry Rabe, professor of environmental policy at the University of Michigan’s Gerald R. Ford School of Public Policy and the author of the book “Can We Price Carbon?”

“It’s why we’ve really struggled with this for more than 30 years,” he says.

Carbon pricing is not a new concept. A number of countries and regions – from the European Union to California – already have carbon pricing systems. But even where they exist, the details are thorny. The taxes often aren’t yet high enough, critics say, to fully reflect the true communal costs of emissions – from floods to heat-related deaths and wildfires.

“We have perverse incentives,” says Matthew Kotchen, a Yale School of the Environment professor who has studied these communal costs. “We just don’t have the market system there reflecting the true costs.”

Scientists say that in order to limit global warming to 1.5 degrees Celsius this century – the target amount set forth by the Paris Agreement to avoid ecological catastrophe – countries will need to dramatically curtail emissions. The Biden administration has pledged to reduce greenhouse gas emissions by 2030 to about half of what they were in 2005; this past weekend, leaders of the Group of Seven leading industrial nations agreed to cut emissions by 2030 to half of what they were in 2010.

A carbon price, supporters say, could be one of the best paths toward meeting those pledges. The resulting income from the tax or “price” can either go into government reserves to support other sustainability initiatives or be returned to citizens in the form of dividend checks.

One way a carbon tax could work

Researchers from Yale University analyzed one prominent plan and determined that the proposed carbon fee would, by itself, cut U.S. emissions in half by 2035. This plan, from the bipartisan Climate Leadership Council, an advocacy group, would set a price on carbon and then redistribute the revenue back to American households – about $2,000 a year for a family of four. It also calls for integrating a “border carbon adjustment,” or a way to apply the same carbon price to goods coming from abroad, with the goal of keeping American companies from losing competitive advantage to countries without similar pricing mechanisms.

But this and other carbon pricing ideas haven’t found substantial support on Capitol Hill – or in the White House. At least not yet. Part of this is because even a centrist policy like carbon pricing becomes buffeted by the political wings of each party.

“It has bipartisan support in principle,” says Dan Lashof, the U.S. director of the World Resources Institute. “But if you actually try to count up Republican members of Congress who have sponsored or co-sponsored a carbon pricing bill that’s currently in Congress – it’s pretty thin.”

“It’s something the business community wants,” says Mr. Welsh, who has lobbied for a climate price system for years with the conservative-leaning Chambers of Commerce, which recently came out with a new position urging market-based solutions to the climate crisis. “When there’s a federal price on carbon it brings clarity.”

And that clarity can unlock investment and business opportunities, says Catrina Rourke, vice president of policy at the Climate Leadership Council. The carbon dividend plan now has support from a slew of organizations and financial figures – including big corporations like ExxonMobil and Goldman Sachs.

But those actually in Congress still see little to gain from supporting it, observers say.

“Nobody wants to do a tax,” Yale’s Dr. Kotchen says.

Meanwhile, on the left, where there is an increasing focus on environmental justice, critics worry that a climate tax could fall disproportionately on those with lower incomes – people who cannot upgrade to an electric vehicle, say, or who, because they are renting, don’t have the option to avoid carbon-intense heating systems. Progressives stand ready to fight over any dividend proposal – saying tax revenue should be focused on helping populations that have suffered unequal harm from climate change.

But there is a deeper concern about carbon pricing among many environmentalists, and that is the more fundamental question of whether it is possible to address climate change through existing economic tools and markets, or whether more dramatic changes are needed in the way we live and consume.

Over the past months, there have been a number of new efforts to address climate change through the financial system, whether by creating a uniform way to calculate climate risks in investments or putting an actual dollar amount on the cost of carbon. The idea is that these market forces, if designed correctly, will inevitably push emissions down. Large corporations, from banks to oil and gas conglomerates, have jumped on board with this approach – something that raises eyebrows among some climate advocates.

“We have seen a lot of fossil fuel companies come out in favor of climate pricing,” says Rachel Cleetus, policy director with the Climate and Energy program at the Union of Concerned Scientists. “And at the same time, they’re continuing to double down on their fossil fuel investments and infrastructure. So it feels a little disingenuous …. is it greenwashing? Is this just some convenient way of claiming the mantle of leadership while not actually doing anything?”

The Union of Concerned Scientists is not opposed to a climate pricing policy, she says. It supports one – but as part of a full suite of climate initiatives.

The result is that a top idea from a pragmatic standpoint has become a political pickle – for even a climate-focused president. Without more enthusiastic support from the left, and without enough growing support on the right, President Biden is likely wanting to avoid the fight over climate pricing, a number of advocates say.

“The Biden administration is trying to answer the political economy question,” Dr. Kotchen says. “What’s the most likely thing to get the job done?”