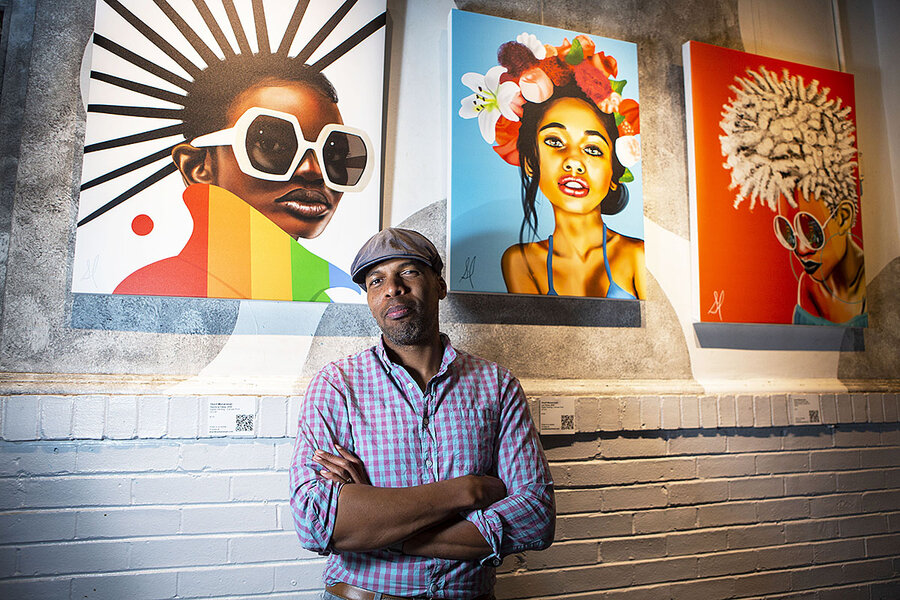 When Sharif Muhammad had children, it changed him as an artist.

Mr. Muhammad, who has taught technology at Boston Day and Evening Academy for almost 20 years, only started painting in 2011. When he enrolled in a weekend oil-painting class, he says the creative connection was so immediate that once he started, he couldn’t stop. Initially, he tried his hand at “random things,” from landscapes to still-life compositions. But when he had his first of two children, he realized they’d inherit his artwork someday. It made him focus on what he most wanted to express as an artist. So he started creating stylized portraits of people that his kids could take pride in.

“I wanted people of color to be seen and to feel valued,” says Mr. Muhammad, sitting in a Boston ice cream parlor that is displaying his artwork. “Just to know that somebody thinks they’re beautiful … and that they’re worthy of being hung on the wall.”

Expanding the definition of what constitutes art, Sharif Muhammad honors everyday Black people and culture in his paintings. He’s also upending notions about who gets to own art.

A decade since that first paintbrush stroke, Mr. Muhammad’s work is in high demand. Buyers have snapped up all his original oil canvases. A protest painting recently adorned the cover of Art New England magazine. His greatest success to date is a line of playing cards featuring Black figures – rather than the standard white faces – for the kings, queens, and jokers. The predominant quality of his work is uplift, but it’s mindful, too, of the protest he’s been feeling over the past year.

“So much of his work is about joy and it’s about hope. But it also tells the truth,” says Rita Fucillo, associate publisher of Art New England magazine. “He does it in a very contemplative and very provocative way.”

For years, Mr. Muhammad’s oil paintings of people of color were mostly purchased by white people. Mindful that his family hadn’t been able to afford art, Mr. Muhammad decided to broaden his clientele by creating art on an iPad and making it available as prints. Displaying his artwork in an ice cream parlor reflects that democratic approach.

The exhibition at J.P. Licks in the Jamaica Plain neighborhood also reveals Mr. Muhammad’s stylistic range. Thanks to the paintings’ almost neon-intensity primary colors, the parlor walls pop like a Sherwin-Williams showroom. In one portrait, a woman grins in bliss as a breeze tousles her cursive curls. In another section, a mixed martial arts fighter with superhero arms bellows in victory. Nearby, a Black ballerina – partly modeled with the face of Mr. Muhammad’s daughter – sits to adjust her shoes. The artist had to use a reference photo of a white ballet dancer because photos of young Black ballerinas were hard to come by.

“There is Black art out there, but there’s not much like mine,” says Mr. Muhammad, pausing between scoops of cake-frosting flavored ice cream. “I don’t think it’s as vibrant. [My] themes are Black beauty. Black excellence. Black brilliance. The Black struggle. I want to capture the whole range of the Black experience in America.”

When Mr. Muhammad played Go Fish with his children, he noticed that the deck of cards was stacked with Anglo-Saxon kings, queens, jokers dressed in medieval garb. So the artist created a bespoke deck for his kids. His Black royals look more like everyday people but with crowns. His joker is a woman in a rainbow coat and Jackie O-style square sunglasses. The ace in the pack is a Black Power fist.

He ordered six-packs of cards for family and friends. When he showcased his creation with a video on Facebook, his brother called him and said, “You need to order a thousand of those right now.” Initially, though, Mr. Muhammad ordered 100 packs. They quickly sold out. As did the next 100 and the one after. His latest order, manufactured in China, was for 2,500.

Portraits of protests and dreams

Since last summer, Mr. Muhammad has focused his artistic gaze on the racial tumult in the country. One portrait, “The Dream,” features a photo-realistic side profile of a man with a dove perched on his head.

“Peace upon Black bodies is basically the message,” he says. “The dream is we can walk around and not be brutalized by anybody – by our own people and by the police.”

“Black Liberty” depicts an American flag furling around the eyes and neck of a Black woman. It was featured on the cover of Art New England magazine.

“It was the easiest cover decision that we have ever made on behalf of the magazine in the 12 or 13 years that we’ve owned it,” says Ms. Fucillo. “We knew it said what we wanted it to say in this moment.”

Yet Mr. Muhammad says his natural default is to depict the sense of wonder and innocence that his children inspire in him. After he’s tucked his children into their beds, that’s often when he’s most inspired to doodle on his iPad.

“The goal is for our kids to grow up in a world where they don’t need to worry about representation,” he says. “I want them to be able to walk into J.P. Licks and this is normalized, like, ‘Oh yeah, of course there’s Black art on the walls. Why is that unusual?’ It’s the same with playing cards. It’s the same with everything.”