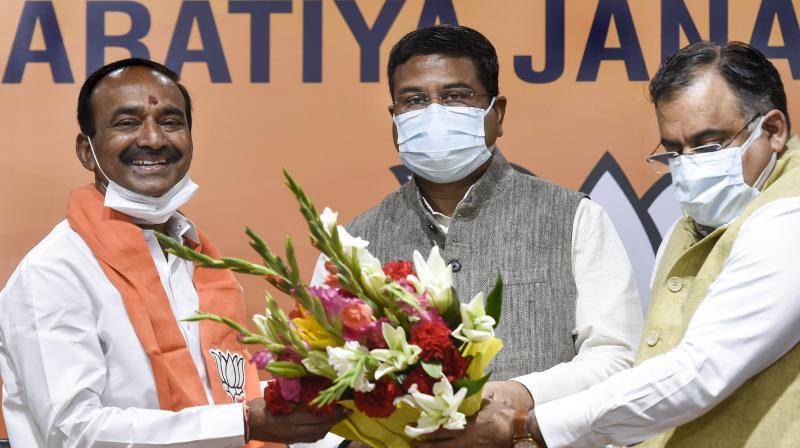 New Delhi: Former Telangana Rashtra Samithi (TRS) leader Etala Rajender, along with other senior members of the party, joined the BJP in the presence of Union Minister Dharmendra Pradhan on Monday at the saffron party's headquarters in New Delhi.

Welcoming Etala to the party, BJP general secretary Tarun Chugh said, "Etala ji is a very prominent face in the south. He was number 2 in the party. We gladly welcome him and the other leaders into the saffron party."

Speaking at the occasion, Union Minister Dharmendra Pradhan said, "Etala ji has a stand of his own in the southern political sphere. In the next Assembly elections, we will emerge victorious and form the government in the state."

"I welcome Etala ji officially into the party and wish him luck," he added.

Etala, speaking on the occasion, said, "I will work with all the enthusiasm and place Bharatiya Janata Party on a prominent place in Telangana." "I will work towards the benefits of the people as I have till now and will not let them down," he added.

Rajender has already tendered his resignation as the Huzurabad MLA and has also relinquished his membership of the Telangana Rashtra Samithi (TRS).

Rajender was a senior leader of the TRS and has held top portfolios such as finance and health in KCR-led successive TRS governments in the state. He was shunted out of the Cabinet over accusations related to land-grabbing.