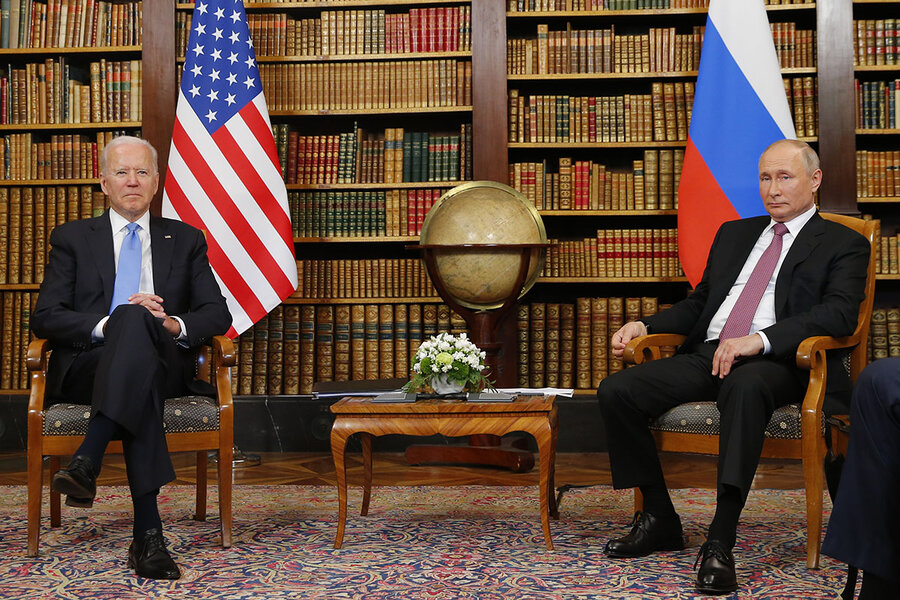 To see the alternating American and Russian flags fluttering in unison on both sides of Geneva’s famed Pont du Mont Blanc – the city’s signature white swans peacefully plying the clear lake waters below – is to imagine the two countries represented by those national symbols seeing eye to eye and finding common ground on pressing global issues.

But looks, as everyone knows, can be deceiving.

The much-anticipated summit held in this city at the base of the Swiss Alps Wednesday between U.S. President Joe Biden and Russian President Vladimir Putin – the final event of Mr. Biden’s weeklong European tour and first overseas trip as president – had little sense of unity or common purpose.

Will the Biden-Putin summit in Geneva help the United States and Russia get beyond mistrust to a stable and predictable relationship? Meeting face to face was important, both men said.

Yet despite the absence of broad smiles, Russian bear hugs, or even a concluding joint press conference, U.S. officials say the two leaders’ three-plus hours of talks laid the groundwork for areas where the two adversaries can work together in the interest of both world powers.

“It’s always better to meet face to face,” Mr. Putin said while seated alongside Mr. Biden before their first meeting. On that score Mr. Biden agreed, declaring at his closing press conference, “There is no substitute for face-to-face dialogue between leaders, none.”

The Russian president, at his press conference, said there was no “hostility” between the two leaders. He characterized their discussions as constructive, and said he considers “the glimmers of confidence I saw between us the principal result of this meeting.”

As a sign that both sides see a need to try to put tense relations back on better footing, the two presidents agreed to return their respective ambassadors to Washington and Moscow. Both governments had recalled their top diplomatic representatives earlier this year.

In addition, the two leaders tasked their foreign policy teams with reviving the moribund dialogue between the two countries on two critical issues: “strategic stability” concerning nuclear stockpiles and proliferation, and cybersecurity.

U.S. officials had said the summit, which some in the United States judged premature and likely to primarily serve Mr. Putin’s interests, would allow Mr. Biden to put Russia on notice that malign activities – like cyberattacks on critical infrastructure – will be met with a swift response.

And indeed, Mr. Biden announced that he presented his Russian counterpart with a list of 16 “critical infrastructure” areas – including water systems, energy, and hospitals – that should be “off limits” and warrant agreed protections.

The summit, in an 18th-century villa with views of Lake Geneva, had little of the historic heft of another Geneva summit 36 years ago between presidents Ronald Reagan and Mikhail Gorbachev. That meeting is now seen as having set the stage for the end of the Cold War.

No one expects Wednesday’s summit to have such legs. In fact, some worry it might end up doing little more than elevating Mr. Putin’s global standing.

Even if the summit managed to reach some consensus on Afghanistan security after a planned U.S. exit, “that’s still not big game-changing stuff, so I’m not sure what we get from something that really elevates Mr. Putin when he hasn’t changed a single behavior,” says Heather Conley, a former deputy assistant secretary of state for European affairs in George W. Bush’s administration.

The White House insisted the summit was about giving “security and stability to our relations, but the Kremlin’s entire policy is based on insecurity and instability, so it’s hard to see how we get from there to alignment on any issues,” adds Ms. Conley, now director of the Europe, Russia, and Eurasia Program at the Center for Strategic and International Studies in Washington.

Yet while Mr. Biden has no illusions about the challenges of working with Mr. Putin, White House officials say, he concluded that airing differences and testing the waters of engagement was still the better course.

The shorthand for what senior aides said were Mr. Biden’s three basic aims in sitting down with Mr. Putin might read: arms control, cyberattacks, Aleksei Navalny.

As a senior administration official told reporters Tuesday, President Biden wanted the summit to, first, have laid the groundwork for a set of “taskings” for areas where sustained U.S.-Russia cooperation can “advance our national interest and make the world safer.”

At the top of that list sits arms control. Although the two leaders did earlier this year extend the New START Treaty for five years, nuclear proliferation experts worry that unless sustained and comprehensive arms reduction talks get underway soon, the world’s two largest nuclear powers could find themselves in an arms race with no limits by 2026.

Second, Mr. Biden sought to clearly lay out for Mr. Putin the areas of vital national interest where “Russian activities that run counter to those interests will be met with a response,” the official said.

One of those areas is the cyberattack activity that – whether launched by Russian government entities or by criminal malware gangs that the U.S. says are harbored in Russia – has hit both U.S. elections and vital infrastructure over the past year.

And third, Mr. Biden envisioned the summit as an opportunity to explain to the Russian leader his vision for American values and how they fit in his conception of U.S. foreign policy.

That includes U.S. support for human rights and democratic governance around the world. It is in that context, senior aides say, that Mr. Biden intended to cite the case of Mr. Navalny, the jailed leader of a prominent opposition group who was poisoned last year (by Russian agents, the U.S. has concluded) and nearly died.

At his press conference, Mr. Biden insisted he had advanced all three criteria for the summit, but added that the “proof will be in the pudding.”

For his part, Mr. Putin had made it clear in the run-up to the summit that while he was happy to engage with Mr. Biden on points one and two, he considered domestic politics off limits.

“Views on our political system can differ,” Mr. Putin told a group of international journalists he met with last week. But “give us the right, please,” he added, “to determine how to organize this part of our life.”

On the other hand, the Russian foreign minister, Sergey Lavrov, also told journalists recently that Mr. Putin intended to bring up the “human rights” of the protesters at the U.S. Capitol Jan. 6.

The two leaders did not appear to narrow their wide differences over human rights. Mr. Biden said he explained why cases like Mr. Navalny’s and American values are linked, but an unfazed Mr. Putin dismissed the political opposition leader as a lawbreaker and foreign agent.

On arms control, both sides say they are interested in resetting the concept of strategic stability that governed post-Cold War arms control diplomacy and agreements – until crumbling and falling into disuse over recent years.

“Both sides have expressed a common interest in renewing a serious dialogue on maintaining strategic stability, [defined as] ensuring that neither side has an incentive to use nuclear weapons first or has an incentive to build up its nuclear forces,” says Daryl Kimball, executive director of the Arms Control Association in Washington.

Beyond that broad accord, “each side has a different view on what threatens strategic stability and what issues should be the focus of such talks and future potential arms control arrangements,” he adds.

Senior Biden administration officials have said that any talks should at least initially focus on the “very complex set of nuclear arms issues” facing the two countries, Mr. Kimball notes, while Russia wants a “comprehensive approach” that according to Mr. Lavrov would include “nuclear and non-nuclear, and offensive and defensive weapons” from the start.

Administration officials say the U.S. could be open to more comprehensive discussions down the road, but that both sides need to focus on the nuclear issue given the final expiration of New START in 2026.

Mr. Kimball says he is heartened that the two leaders reconfirmed the idea that their predecessors agreed to nearly 40 years ago, that a nuclear war cannot be won. Yet noting that both countries are spending “tens of billions a year modernizing and upgrading their massive nuclear stockpiles,” he says the need is urgent for dialogue that is “regular, frequent, and comprehensive” and “sets the stage for actions and agreements that meaningfully reduce the nuclear risk.”

Whether or not the two nuclear powers get there anytime soon may not be known for a while. In the meantime, the two leaders’ separate press conferences were symbol enough that – despite those fluttering flags on the Pont du Mont Blanc – the two countries remain far apart.