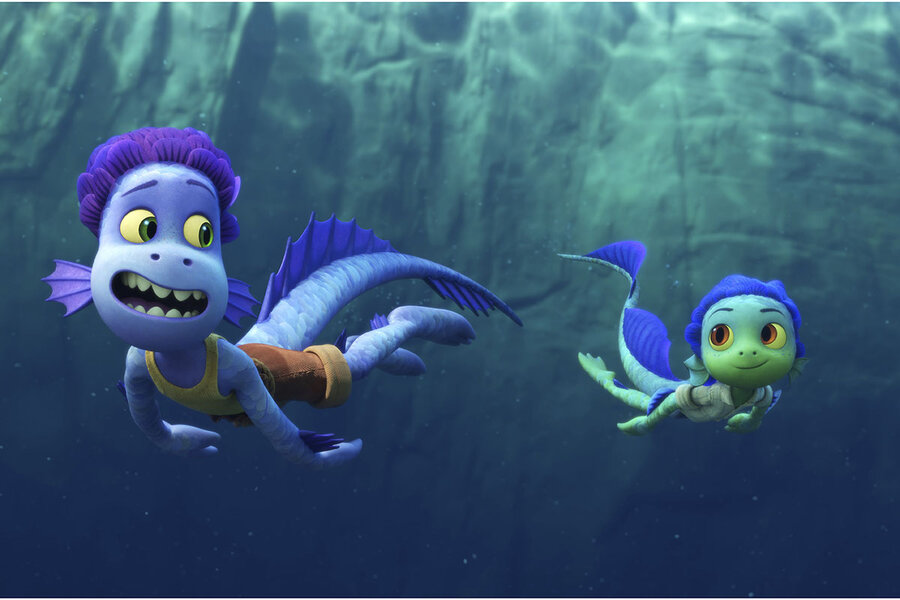 The titular character (voiced by Jacob Tremblay) is a young sea monster so immersed in his watery environment that he isn’t even aware of the existence of dry land. By day, Luca is an underwater shepherd who uses his crook to herd a school of fish grazing on a patch of seagrass. (If you think that’s odd, wait until you hear the aquatic livestock “baa” like sheep.) At night, he returns to the grotto he shares with his mother, Daniela (Maya Rudolph), and father, Lorenzo (Jim Gaffigan).

Luca’s worldview changes when he meets another young sea monster, Alberto (Jack Dylan Grazer), who mostly lives on land. Luca dares not set foot on shore because, well, he doesn’t have feet. But once he overcomes his fear of following his new friend onto a beach, he discovers that sea monsters instantaneously take on a human form when they are exposed to air. The young amphibian delights in exploring his new environment – the Italian Riviera circa 1953.

As the heat soars in much of the United States, a new Pixar movie offers respite. Coming-of-age story “Luca” isn’t quite on par with aquatic sibling “Finding Nemo,” says the Monitor’s chief culture writer. But, he says, it brings summer vacation to your living room.

Upon finding out Luca’s interest in the human world, Daniela threatens to banish her son to live in the ocean depths with his uncle Ugo (hilariously voiced by Sacha Baron Cohen). So Luca flees back to land to join Alberto. The duo hide out in the nearby seaside fishing village of Portorosso and try to blend in with the locals.

“Luca” is a coming-of-age story about trying to fit in, overcoming one’s fears, and expanding one’s outlook. The family movie – available to all Disney+ subscribers on June 18 – invites inevitable comparisons to other fish tales such as “Finding Nemo” and “The Little Mermaid.” But if the theme of adolescents struggling with identity seems about as fresh as yesterday’s catch, the colorful animation spruces it up like a spritz of lemon and a sprinkle of herbs. The pastel hues of the village buildings and translucent Mediterranean – not to mention the cones full of gelato – look so enticing that “Luca” may spur tourism to Italy.

Much of the story is about how Luca and Alberto struggle to adapt to the strange social mores of the fishing village. The two immigrants soon get preyed upon by the town bully Ercole (Saverio Raimondo). Fortunately, they’re also befriended by a kindred spirit, Giulia (Emma Berman), herself an outsider. The trio name themselves The Underdogs. But neither Luca nor Alberto dares reveal his true identity to Giulia, so they have to avoid any contact with water. That means treading carefully on the cobblestones around the fountain in the town square.

“Luca” revels in the wonder of childhood discovery. When Giulia shows Luca the night sky through a telescope, finding out about the existence of stars and planets expands his horizons beyond anything he imagined as a sea-dweller. It even sparks a desire within him to go to school to study astronomy.

Director Enrico Casarosa portrays the children’s imagination with a series of musical montages and dream sequences. Yet, for all the energy and joy of those scenes, they often feel like an attempt to pad a story that’s at times as thin as angel hair pasta. With the exception of last year’s “Soul,” Pixar’s recent movies have been missing the sophistication that characterized the studio’s golden years. Its classics grappled with existential questions at various stages of life. Kids have enjoyed those stories at one level even as adults appreciated the sophisticated ideas on a different plane.

The most intriguing aspect of “Luca” is that it makes a Montessorian argument for empowering children to explore in order to develop their individuality. The counter-argument to giving kids free range is embodied by Daniela, who warns, “The world is a very dangerous place, Luca.” Indeed, it is. Turns out that some of the fishermen of Portorosso believe sea monsters exist and want to hunt them.

“Luca” stays close to the surface instead of diving deep into an exploration of how much freedom to give children. Arriving at a time when there’s a robust debate over how best to raise kids in the 21st century, it’s a missed opportunity.

“Luca” is nonetheless a pleasurable movie experience. A summer vacation in one’s living room, it will leave you smiling from gill to gill.