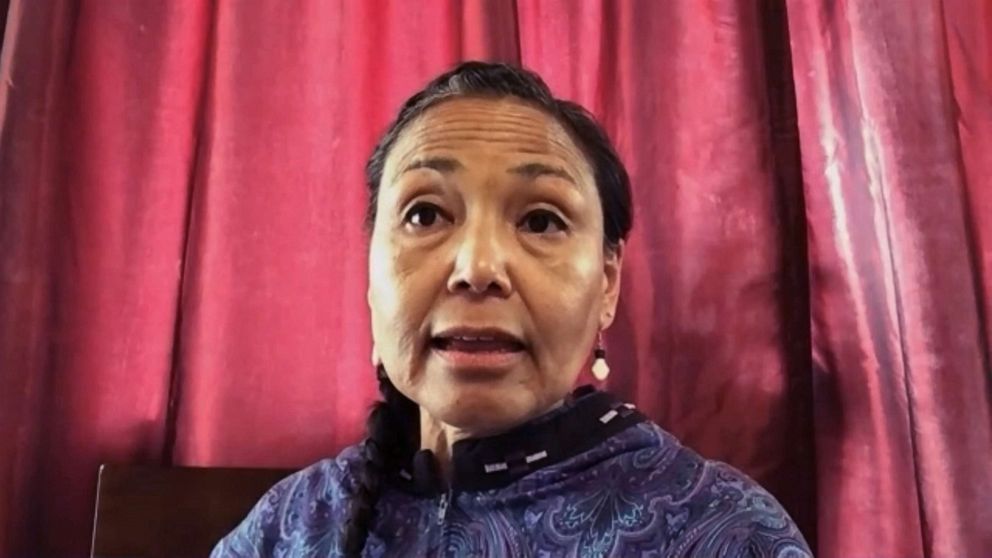 Fina Kiefer said there was a moment where she thought she “wasn’t going to make it.”

The 55-year-old hiker had been alone on an Alaska mountain for days after being chased off a trail by bears. She could see helicopters overhead looking for her, but they couldn’t find her. She had run out of food and water and was injured from falling. Then the sky opened up and it began to rain.

“If the helicopters couldn’t see me and I was getting wet, I would come into hypothermia,” Kiefer told ABC News in an interview airing Friday on “Good Morning America.”

“That was my biggest fear,” she said. “Then I would never get out.”

Kiefer’s ordeal started out as a 12-mile hike she said she had prepared for, up the Pioneer Ridge Trail, near where she lives in Palmer, Alaska. She said she began hiking the trail on Monday at around 3:40 p.m. local time.

“I’m an avid hiker and I really believe in the Lord,” she noted. “When you get out there in the wilderness, it’s a beautiful thing because you can see more of him and it’s your time with him. That is part of the beauty of just being outside.”

But the hike proved to be tougher than expected, and Kiefer said she didn’t reach the 6,393-foot peak until after 10 p.m. She was forced to make her own path on the descent and go to the other side of the mountain because she said there was too much shale rock. She said she texted her husband to let him know.

It was now after 1 a.m. and getting dark. Kiefer said she saw what she thought were a pair of moose grazing in a valley some 50 yards away. But as the animals turned to look at her, one began to charge. She then realized that they weren’t moose; they were bears.

“In my mind, while he was charging me, I was saying to God: ‘Is this the way I’m going to die?'” she recalled.

As the bear ran toward her, Kiefer said she stood her ground and quickly grabbed a can of bear spray from her backpack.

“I sprayed the first spray and then I said, ‘Hey!’ And he stopped his charge at about 20 feet,” she told ABC News. “I sprayed again because he was still thinking. I sprayed again the second time and then I said, ‘Go! Go!'” And then he was like so startled that he like turned around, ran down with the second bear in tow, down to the valley with the trail that I was going to take.”

Kiefer said she was forced to hike back up from where she came because it was dark and she didn’t want to cross paths with the bears again. She texted her husband to tell him about the encounter and again later to let him know that she was on the other side of the valley, but her cellphone died shortly thereafter, she said.

The Alaska State Troopers said in a statement that it was notified by Kiefer’s husband on Tuesday at around 1:29 a.m. local time that she was alone and in need of assistance after being chased off the trail by bears. A search for Kiefer was launched, with state troopers enlisting the help of volunteers and Alaska’s National Guard. Teams with dogs on the ground scoured the Pioneer Ridge Trail and the surrounding area for any signs of Kiefer, while crews in helicopters looked from above.

But Kiefer was on the other side of the mountain and the helicopters couldn’t see her through the thick brush, even as she waved. So she knew she had to try to get down on her own, she said.

“As I was going down my own trail, making my own trail, I held on to this branch and this branch gave way and I went down with the gravity and hit my head,” Kiefer told ABC News. “I was laying there and this still small voice says: ‘You cannot sleep.’ And I knew I had to get back up.”

Kiefer said she finally reached an area of open space and waited there for hours, hoping the helicopters would finally see her. But they didn’t, and she was getting cold and began to hallucinate. She said she started seeing people who weren’t actually there and thought she saw a parking lot while she was still on the mountain.

“‘I got to get off this mountain,'” Kiefer recalled thinking to herself. “‘They’re not coming, or they can’t see me.'”

Another day had passed and it was getting dark again, so Kiefer decided to stop and rest. She said she had eaten snow and some cranberries along the way and also found water from a stream. She collected wood and built a fire using the waterproof matches her husband had given her months ago.

“Then I just periodically dozed off,” she said. “I would fall asleep and then wake back up to put more wood on the fire.”

That’s when it started to rain. Kiefer said she took shelter underneath the brush but was still getting wet. The rain shower turned into a downpour, prompting Kiefer to keep moving and continue on the descent.

On the way down, Kiefer took another fall and also spotted a large amount of bear scat in a field.

“I was getting discouraged,” she told ABC News. “I cried many times on that mountain.”

But then Kiefer said she saw a white feather and she heard the “still small voice” again.

“He reminded me of Psalms 91, he will have his angels and camp round about me,” she said. “It gave me a boost to stay alive.”

“And so, no matter what, I was so determined. He gave me the determination,” she added.

Kiefer said she eventually emerged from the woods and came across someone’s residence.

“I see this beautiful green lawn, and I could have kissed that green lawn,” she recalled.

She said she knocked on the door of the home and rang the doorbell, but nobody answered.

So Kiefer continued walking and got to a roadway. She was drenched by that point and her clothes were torn, but several cars that drove by didn’t stop.

“Then all of a sudden this truck was coming in the opposite direction of me and he stopped,” she said. “I guess he could’t believe it because he looked at me a while and he said, ‘Do you know how many people are looking for you that love you?'”

The man was a volunteer who had just left the search area after efforts to locate Kiefer were called off for the day due to deteriorating weather conditions. It was Wednesday evening and rescuers still hadn’t found any evidence of Kiefer’s whereabouts, according to the Alaska State Troopers.

The volunteer picked up Kiefer on Knik River Road and notified the other rescuers as he drove her back to the parking lot of the trailhead, where her car was parked.

“His name was Steve and he gave me food. He was a good guy,” Kiefer said. “I’m so thankful for the rescuers.”

After having some food and coffee, which she said was decaf but she “didn’t care, it tasted so good,” Kiefer was transported by ambulance to a local hospital for evaluation. She was subsequently released, telling ABC News she still has some cuts and bruises. She has since been reunited with her loved ones.

“I was just so thankful to be alive and to love my family again and friends,” Kiefer told ABC News. “Life’s too short.”

When asked whether she will hike again, Kiefer said she will.

“I’m going to do it again, but maybe not that mountain,” she added. “I will have a satellite phone with me next time. I’m not going to stop.”