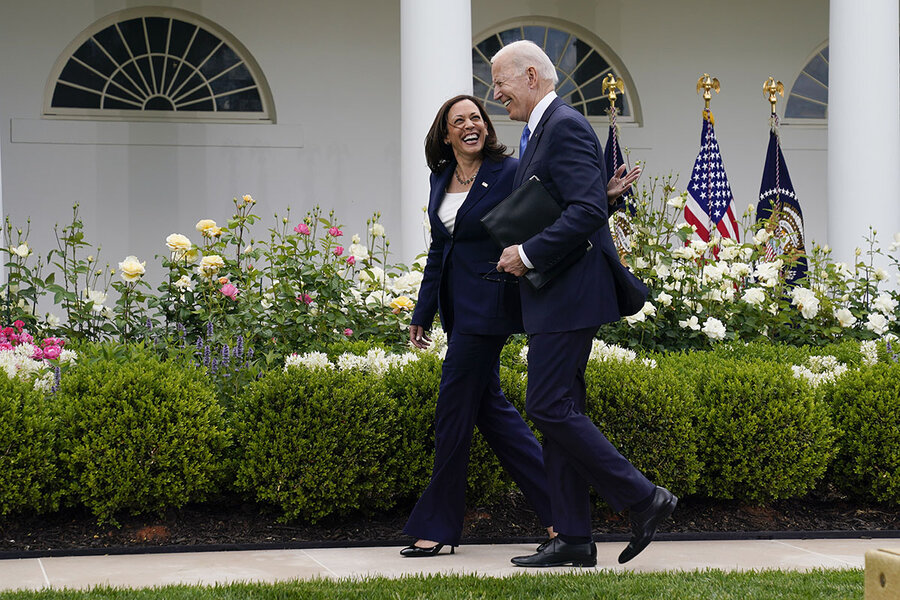 What the vice president didn’t realize, President Biden joked, was that by promising she’d be “the last person in the room” before big decisions are made – a sign of her central role in his administration – “that means she gets every assignment.”

The vice president’s groundbreaking personal profile and leadership on top issues have put her in the spotlight. Supporters say it’s inevitable that such a meteoric rise comes with a learning curve.

Five months into the Biden-Harris administration – a double-barreled label that intentionally includes her name – Ms. Harris’ position as the highest-level elected woman, and woman of color, in American history can be described as nothing less than a high-wire act.

That’s not a value judgment on her performance. It reflects the reality of her situation. Her status as Mr. Biden’s political heir apparent, including potentially topping the Democratic ticket in 2024, trains the focus on her even more sharply.

In short, it’s safe to say that no new vice president has faced such intense scrutiny from Day One. And the stumbles have been well publicized. Most recently, her snappish responses to TV interviewers on why she has yet to visit the still-besieged U.S.-Mexico border have privately frustrated supporters and handed fodder to her detractors.

Longtime allies argue that Ms. Harris has done as well as can be expected, given how far and how fast she has risen – from district attorney of San Francisco (2004-2011), to California attorney general (2011-2017), to U.S. senator, to vice president.

“Look at her trajectory – it’s been as meteoric a rise as anyone, probably with the exception of [President Barack] Obama, at least in my lifetime,” says Brian Brokaw, who managed her successful campaigns for state attorney general and advised her Senate campaign.

“With every step she’s taken, there’s a learning curve,” Mr. Brokaw adds. “Every job she has ascended to has greater responsibilities, a wider array of policies, a whole cast of characters to get to know – not to mention the level of scrutiny, which has increased exponentially. There’s not much room for error.”

As a woman, Ms. Harris has to parry critiques on everything from her mannerisms to her shoes. “When’s the last time someone commented on Mitch McConnell’s footwear?” Mr. Brokaw asks, referring to the Senate GOP leader and alluding to the Converse sneakers the vice president sometimes favors.

At times, however, being a woman in high places has its advantages. On Tuesday, Ms. Harris hosted a dinner for the Senate’s female members – 21 out of 24 came – at the vice presidential mansion. It was a rare moment of bipartisan sisterhood, as seen in a tweet from Republican Sen. Deb Fischer of Nebraska. Some suggest it could lead to more such gatherings, and the potential for problem-solving, as Senate women have done in the past.

Still, Ms. Harris’ critics lurk, ready to pounce. Fox News has devoted coverage to her habit of laughing in high-profile public moments, at times awkwardly, suggesting it’s a “defense mechanism” in moments of uncertainty or discomfort. The border crisis is “no laughing matter,” Republican National Committee Chair Ronna McDaniel piled on in a column.

She has faced criticism from the left, too, as when Rep. Alexandria Ocasio-Cortez, Democrat of New York, jumped on the vice president’s statement from Guatemala last week exhorting potential migrants: “Do not come.”

No matter that that’s been the administration position from the start, and that the overarching policy goal is to address the root causes of migration northward from Central America. Still, Congresswoman Ocasio-Cortez saw her opening, and tweeted that the vice president’s message was “disappointing,” seeking asylum is legal, and the U.S. bears blame for destabilizing the region.

The mere fact that two women of color could dominate debate on a major policy question is itself a victory of “representation.” But that doesn’t necessarily make it easier for women in high places.

“There are still terrible double standards out there for women. How strong, for example, can they be?” says Debbie Walsh, director of the Center for American Women and Politics at Rutgers University. “She’s vice president – she can’t overshadow Joe Biden, she can’t disagree with him. She’s just in a very difficult spot.”

Ms. Walsh also notes that Ms. Harris has taken on two of the toughest issues of the day: the border and voting rights, the latter of which she requested. But if she were given an easier portfolio, the reaction would be, “They’re giving her softballs so she looks good.”

There have also been suggestions that Mr. Biden is giving her the toughest assignments to shield himself. That’s unlikely, says Joel Goldstein, a scholar on the vice presidency.

But Mr. Biden is still following President Jimmy Carter’s model of involving his No. 2 deeply in policymaking and foreign policy. Ms. Harris, in fact, called President Carter’s deputy, Walter Mondale – credited with establishing the modern vice presidency – in April, the day before he died.

Mr. Biden telegraphed well in advance that his running mate would be a woman, and it came as no surprise when he selected a woman of color – and the daughter of immigrants, with an Indian mother and Jamaican father. Overall, the Biden watchword in building his government has been diversity: In his first 100 days, more than half of agency appointees were women, 18% were Black, and 15% were Hispanic.

“There has never been an administration that has made such an effort to be inclusive of traditionally excluded groups in its composition as this one,” says Mr. Goldstein, a law professor emeritus at Saint Louis University. “[Ms. Harris] personifies that.”

Mr. Biden and Ms. Harris do have an important résumé point in common: presidential campaigns that failed spectacularly, only to see their political fortunes resurrected by joining an ultimately successful ticket.

Ms. Harris’ well-orchestrated presidential rollout proved to be the peak of her campaign, which was riven by internal staff conflicts and poor fundraising. She dropped out in December 2019.

In 2020, Mr. Biden chose Ms. Harris in a competitive process, despite her attack on him in a Democratic primary debate over his opposition to busing in the 1970s. The Bidens were taken aback at the time, but Ms. Harris later dismissed the skirmish as just politics and Mr. Biden let it go.

It’s no coincidence that most of Ms. Harris’ current staff didn’t come from her campaign or Senate office, says a source familiar with the vice president’s operation who requested anonymity to speak freely.

“It wasn’t a well-run presidential campaign,” says the source, noting that the Biden team didn’t want people who orchestrated that debate attack in his White House. The goal was “to make sure they had a unified operation.”

The president and Ms. Harris often receive the president’s daily intelligence brief together, and they have lunch weekly. Ms. Harris also reportedly has a weekly one-on-one meeting with White House chief of staff Ron Klain.

By many accounts, Mr. Biden and Ms. Harris have a warm relationship, going back to her connection to Beau Biden – the president’s late son, who served as attorney general of Delaware when Ms. Harris held the same position in California.

The fact that Mr. Biden loyally served eight years under President Obama, the first Black president, also looms large. Goodwill among Black voters was key to both Mr. Biden’s nomination and election – and his elevation of Ms. Harris as the first Black vice president fits his model of inclusion.

The parallels in the Harris and Obama life stories are striking. Both are mixed-race children of immigrants, raised by strong single mothers, and both spent periods of their youth in foreign countries. Both also speak of how they made conscious decisions to embrace their Black identity. Ms. Harris attended the historically black Howard University in Washington, D.C.

Now, in the upper reaches of American politics, Ms. Harris also benefits from the path forged by Mr. Obama, who walked his own tightrope when addressing racial matters – guarded at first but, over time, more comfortable and willing to speak out.

“Obama especially, but even Kamala Harris to a degree, has been able to capitalize on identity,” says LaFleur Stephens-Dougan, a political scientist at Princeton University. “They can help build bridges and cross cultural divides.”

Unlike Mr. Obama, Ms. Harris begins her time on the national stage during a period of racial ferment. That, in a way, made Mr. Biden’s selection of a Black running mate all the more logical, as he sought to show voters he’s serious about inclusion and making sure that when decisions are made, there’s diversity in the room.

But like Mr. Obama, Ms. Harris tiptoes carefully when asked to discuss race in America, notes Professor Stephens-Dougan. Last April, after Sen. Tim Scott of South Carolina – the Senate’s only Black Republican – asserted that America is not a “racist country,” Ms. Harris was asked to respond.

“No, I don’t think America is a racist country,” she said on ABC’s “Good Morning America.” “But we also do have to speak the truth about the history of racism in our country and its existence today.”

Ms. Harris’ background as a prosecutor, and her tough-on-crime approach, has also forced her to walk a fine line on a racially charged subject. Many progressives believe she was on the wrong side of efforts to reform the criminal justice system. But for the nation’s vast political center, that element of her résumé helped frame her as a more moderate Democrat, like Mr. Biden.

Progressives in Congress are hopeful that through genial persuasion – and the occasional jab, as with Ms. Ocasio-Cortez – Ms. Harris can be an ally.

In an interview, Democratic Rep. Ro Khanna of California, a deputy whip in the Congressional Progressive Caucus, says he wants Ms. Harris to help push a $15 federal minimum wage through Congress, as well as climate change measures, cancellation of student debt, and a scaling back of “massive defense increases.”

But he also empathizes, as the son of Indian immigrants, with the challenges she’s navigating.

“I understand the scrutiny as an Indian American, but I imagine in her case it’s 100-fold – being vice president, being a woman, being African American as well,” says Congressman Khanna, who first met Ms. Harris in 2003. He’s also confident that “she will continue to conduct herself with dignity and grace.”

Then he throws out an invitation: “I’d love for her to come talk to the Progressive Caucus.”