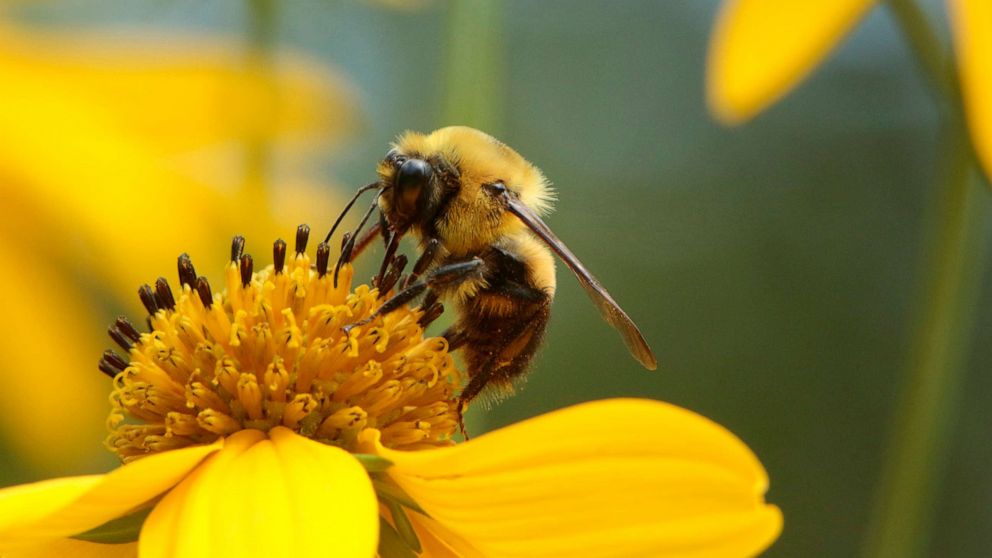 Farmers use insecticides to fend off plant-eating pests, but the chemicals can also harm the bees that pollinate crops. To better protect crucial pollinators, a team of scientists from Cornell University developed pollen-sized pills that carry an antidote to organophosphates, one of the most popular types of insecticides. Bumblebees that ate antidote pills after being exposed to organophosphate survived at higher rates compared to other bees that did not take the pills, the team reported in the journal Nature Food last month.

The scientists first discussed the idea of helping pollinators break down pesticides in a biomaterials class at Cornell, said James Webb, who was a graduate student at the time. The professor, Minglin Ma, later asked Webb to join his lab, and they developed their idea with others for about two years.

Pesticides used in large amounts can kill bees within a couple of days and sometimes instantaneously. Even at a lower dose, they can damage bees’ health, shorten their lifespan or harm their ability to reproduce, said Reed Johnson, an entomologist at Ohio State University. Organophosphates, which account for more than 30% of global insecticide sales, are particularly damaging to bees’ neurological functions, even at a lower dose. And the traditional solution to the pesticide exposure problem has been pretty low tech, said Johnson. It is basically to avoid spraying pesticides when bees are present. But that is not as easy as it seems, because bees are not always visible. For example, soybean flowers tend to be hidden, which means that the neighborhood bees that visit the flower are often hidden as well, Johnson added.

Scientists have known that an enzyme called amidohydrolase phosphotriesterase, or OPT, can deactivate organophosphates. But they weren’t able to use OPT as an antidote because it doesn’t work in an acidic environment such as a bee’s stomach. To solve this issue, the team at Cornell encapsulated OPT with nanoparticles made from calcium carbonate, the same ingredient as chalk. The resulting pills were about four micrometers in diameter, similar in size to pollens that the bees consume.

Webb, who founded the company Beemmunity to commercialize the idea, said the technology is almost ready for the market — the target release date is end of this year, and he does not see any regulatory hurdles that the company needs to jump over. He’s also expanding the concept to provide protection against other types of pesticides.

Johnson, who was not involved in the study, is excited about the technology’s potential, describing it as “really innovative.” Because organophosphate use is slowly being phased out due to human health concerns, Johnson said “it would really be amazing if they could find something that would protect against the neonicotinoids [a class of insecticides], or some of the other newer chemistries that are in wider use.” He could also see this technology expanding to honeybees, which have similar gut pH as bumblebees — though potential impact on human health should be tested before being used with insects that make honey for human consumption. He added, “This probably has a lot of really interesting applications even outside of pesticides.”