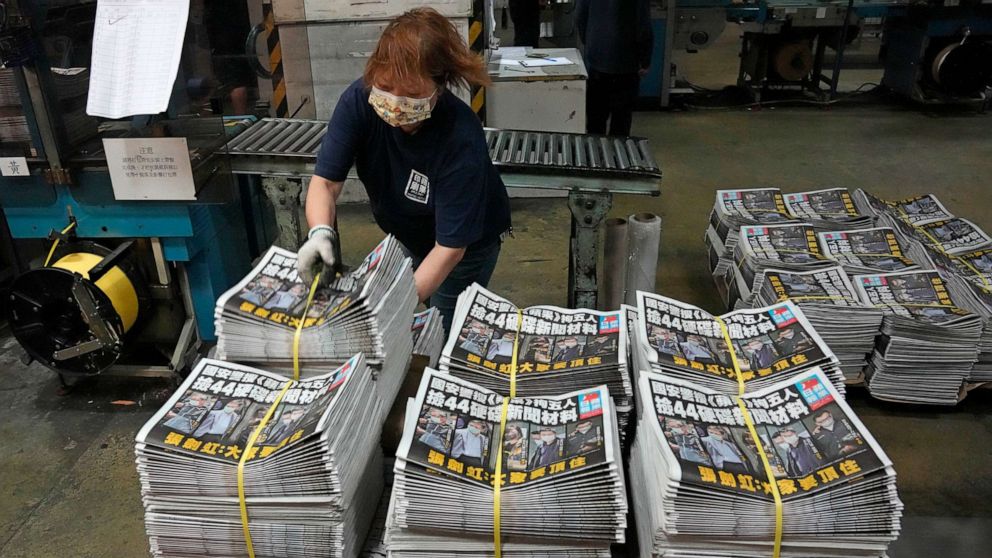 HONG KONG — Hong Kong’s last remaining opposition paper Apple Daily may be forced to shutter its operations and publish its last edition as soon as this Friday if it is unable to get the approval of the government to unfreeze its assets to pay staff.

An internal memo sent to employees on Monday, seen by ABC News, said that if management still doesn’t get access to the funds, no articles will be uploaded to the media outlet’s digital platforms after 11.59 p.m. on Friday, meaning that the last newspaper could be published on Saturday morning.

Editor-in-chief Ryan Law and four directors were detained on suspicion of colluding with foreign forces under the controversial national security law, which was imposed by Beijing last summer following the mass pro-democracy protests of 2019.

Apple Daily is owned by pro-democracy activist and media tycoon Jimmy Lai, who is already in jail for a string of other protest-related charges while awaiting trial in a national security case. Lai and the paper are openly critical of China.

Lai’s longtime advisor, Mark Simon, told Reuters that it had now become impossible for the company to conduct banking operations in Hong Kong because authorities had “criminalized” any activities with the company’s accounts. Simon said that even when vendors tried to pay the company, it was rejected. “We can’t bank,” he said.

One journalist at the paper, who spoke to ABC News on the condition of anonymity, said that he is “not optimistic” the paper will still be running after Friday.

“I will be reluctantly unemployed soon, and I don’t think there will be any other media that would support democracy like Apple Daily,” he said, “I’ve decided to stay until the end because I want to witness the end of the era, which is the death of press freedom. I’m furious because of the blatant actions by the authority. I’m sad because I’m going to leave the best journalists and coworkers in town. Seeing them farewell one another today was rough.”

Police have cited several articles printed in the tabloid and its online edition that they have claimed called for foreign sanctions on Hong Kong and China, warning that the public could face prosecution for sharing the reports in question on social media.

However, Apple Daily supporters and democracy activists say this is a blatant attack on press freedom.