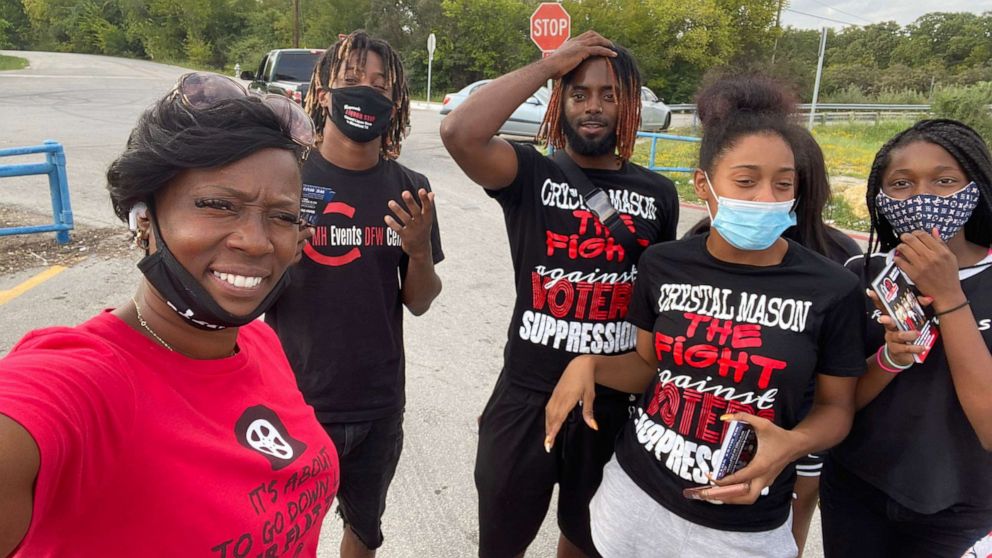 This story is in conjunction with a special edition of ABC News’ “Start Here.” http://apple.co/2HPocUL

Crystal Mason tried voting in the 2016 presidential election, but she didn’t know she wasn’t eligible, and her ballot was tossed.

But that uncounted ballot still led to a conviction and a five-year jail sentence, with that ruling still being appealed almost five years later.

Mason, a 46-year-old mother of three from the Dallas-Forth Worth area, showed up to vote in November 2016 at the same polling location where she voted at in 2012. She was told her name wasn’t on the voter rolls. A poll worker suggested she fill out a provisional ballot, so she did.

“Maybe my name must have come off of something,” Mason said. “That’s all I could think of. You don’t think, ‘Hey, you’re doing something wrong.'”

Because she cast that provisional ballot — a ballot used when there are questions about a voter’s eligibility and that’s only counted if everything checks out — the system caught Mason’s vote. But she still faces the consequences.

For many, her case is an example of what can happen in the face of harsh voting restrictions, and her case took place before a more intense focus on voter fraud, despite little data existing to show it’s a meaningful issue.

As the Texas Legislature continues to push forward priority voter legislation, Senate Bill 7, which seeks to limit hours for voting and who can vote via absentee ballot, as well as increase criminal penalties for certain election officials, voting advocates argue that more people could end up in Mason’s position, which could have a chilling effect on turnout.

Mason, who said she was never informed of the law, is still appealing the rest of her five-year sentence. The supervisor of Mason’s probation officer confirmed her claim, testifying in court that Mason was never told about this law. But the state still found her guilty.

She immediately appealed, but the judge ruled that she violated the terms of her supervised release, so she was required to serve an additional 10 months in jail.

“I missed the holidays, Christmas, New Year’s, my birthday, my daughter’s birthday,” Mason said. “I missed a lot.”

“The 10 months that I did was harder than the 2 1/2, three years that I did,” Mason later continued. “Because, you know, you’re somewhere you [aren’t] supposed to be.”

Over the last year, 14 states have passed 22 bills with restrictive provisions, according to the Brennan Center for Justice.

Up until last month, in Mason’s home state of Texas, Senate Bill 7 was moving through the Legislature. It’s one of the most restrictive voting laws in the United States.

The bill would have made it a second-degree felony for an election official to give a voter a mail-in ballot application if they had not specifically requested one. SB 7 did have a broad amendment, introduced by Democrats, that would have clarified the law, ensuring no one else would suffer Mason’s fate. It would only be a crime if someone were to cast a vote knowing that he or she was ineligible.

But that amendment didn’t do enough to offset the harm the bill would impose on voters, according to voting rights advocates who are concerned the bill still will largely have a chilling effect on turnout by restricting different convenient options for voters, particularly voters of color.

Republicans argued that the bill was about “election integrity” and preventing fraud.

According to the Washington Post, “from 2015 to 2020, a period during which more than 44.1 million votes were cast for presidential and gubernatorial races and for constitutional measures alone, there were only 197 complaints of election fraud filed with the state. Only 23 were from the 2020 election itself. The office of Texas Attorney General Ken Paxton (R) devoted more than 22,000 hours to tracking down fraud cases last year, closing out 16 minor cases around Houston.”

West was the only Republican who responded to an interview request from ABC News — the 17 state senators who voted for SB 7, each of the House Republicans on the election committee, the speaker of the House and the governor all declined or didn’t respond.

West, who is stepping down from his position as GOP chair and reportedly considering a run for governor, described SB 7 as addressing “potential for issues in our voting process” and rejected critics’ ideas it would suppress voting.

Asked what in the bill will prevent fraud, West said he felt strongly that banning 24-hour voting would stop “nefarious” activity. But longer hours for voting are often intended to increase access for people who work irregular shifts.

“I just tend to believe that in the middle of the night and two o’clock in the morning, I mean, there are nefarious and bad things can happen,” West said. “I’m 60 years of age. I have never seen us worry about 24-hour voting in my entire life. And so why is it that all of a sudden we need to have 24-hour voting?”

“Now, if you really want to rectify it, then make Election Day in the United States of America a national holiday so that people don’t have to go to work, and that provides them plenty of time and access,” he added.

Democrats in the Texas statehouse pushed back against the bill. Ultimately, with just hours before the vote, they used the end-of-legislation deadline to their advantage and walked off the House floor in the Texas House of Representatives, breaking quorum, a move that essentially killed the bill.

But the Democrats’ dramatic solution may be short-lived. The following day, Republican Texas Gov. Greg Abbott called for a special legislative session to continue prioritizing “election integrity” — another chance to pass the bill in the Republican-led statehouse.

The issue of voter rights and voting access is also being fought for on the federal level.

Senate Majority Leader Chuck Schumer, D-N.Y., is expected to bring HR 1, known as the “For the People Act,” to the U.S. Senate floor for a vote next week. HR 1 would create a national standard for voting access, including automatic voter registration. But while the House already passed the bill, it’s unclear if Democrats in the Senate have the votes to get it across the finish line.

Mason said she believed she was following all of the terms of her supervised release back in 2016, and she hopes her story doesn’t scare other people from going to the polls.