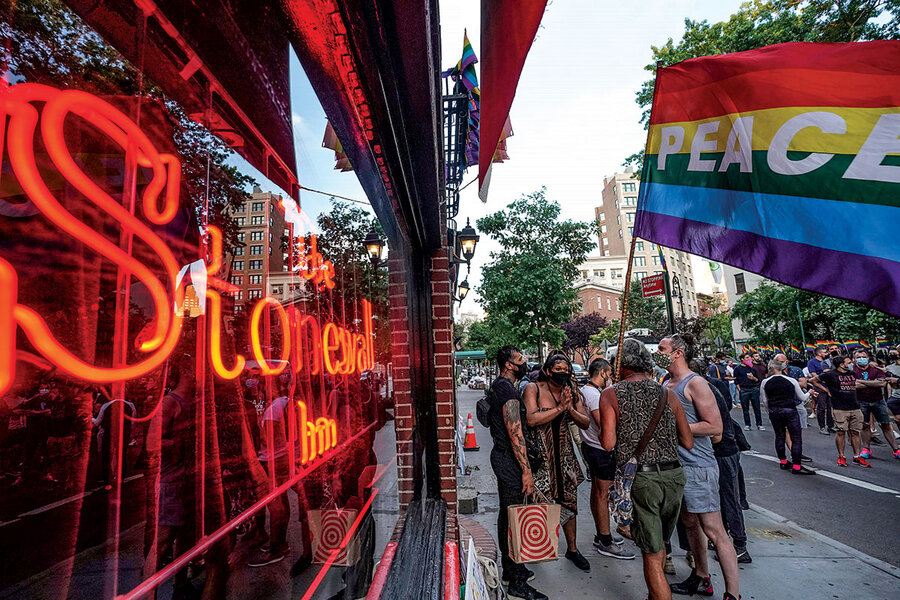 Lounging on a bench one steamy June afternoon, Simone McKay sparkles. Glitter-gold eyelids flash as she talks, her curls bubble-gum pink. For fellow members of the LGBTQ community, her perch in Christopher Park is hallowed ground – along with a New York City icon across the street called the Stonewall Inn.

Marked in neon-red lettering, the site witnessed an uprising more than 50 years ago that helped revolutionize the LGBTQ rights movement.

“The legacy of Stonewall means to me, basically, freedom,” says Miss Simone, as she’s known, dressed for a park performance.  “Freedom from oppression, discrimination.”

The Stonewall Inn is more than a landmark for the LGBTQ community – it’s a symbol of resistance. Here’s a look at the meaning and myths behind the famous uprising.

Why is Stonewall famous?

Raids on gay bars were routine in the late 1960s, but when police raided the Stonewall Inn during the early hours of June 28, 1969, the crowd fought back. Riots continued on and off over a span of six days, writes historian David Carter in “Stonewall: The Riots That Sparked the Gay Revolution.”

Relying heavily on oral histories, the story of the Stonewall Uprising involves some lore. Witnesses say the street resistance emerged haphazardly – not sparked by Judy Garland’s recent death, a myth mentioned in a homophobic news column at the time. Who “threw the first brick” is also disputed, along with who actually showed up.

“My feeling is that who did what doesn’t matter,” says Michael Bronski, author of “A Queer History of the United States.” “What matters is the ultimate political effect of it.”

How did it influence LGBTQ activism?

Though the gay rights movement predates 1969, the Stonewall Uprising catalyzed the modern LGBTQ rights movement. It inspired the creation of the radical Gay Liberation Front (GLF), which sought solidarity with other groups like the Black Panther Party and women’s liberation activists.

“We were out there in public. We weren’t pleading for acceptance, which is what the old gay groups had done … but demanding our rights,” says GLF founding member Martha Shelley. On June 28, 1970 – the one-year anniversary of the uprising – activists organized what is considered the city’s first Pride march. The New York Times reported it stretched 15 blocks.

Members of the LGBTQ community still see Stonewall as a site of protest and progress.

“I guess to anybody that’s queer, it symbolizes … the moment we started to fight back,” says Lenin Compres, a web developer, on Christopher Street this month.

There’s been a push in recent years to honor transgender and nonwhite pioneers from the Stonewall era, such as Sylvia Rivera and Marsha P. Johnson. Though their precise roles in the uprising are contested, the two were involved in GLF and founded an initiative to support and shelter LGBTQ street youth, Street Transvestite Action Revolutionaries.

For years, the transgender community “kept being told we were hijacking the movement,” says Marisa Richmond, professor of history along with women’s and gender studies at Middle Tennessee State University. “How can we hijack a movement we helped start?”

How is Stonewall still important today?

The West Village watering hole gained National Historic Landmark status and remains a site of performance, activism, and memorialization. Hundreds of people gathered there in June 2016 to honor victims of the Pulse nightclub shooting. In June 2020, a crowd feted the Supreme Court ruling that banned job discrimination based on sexual orientation or gender identity. The venue kicked off this year’s Pride month with a virtual concert to benefit LGBTQ centers across the country.

This spring, NYC Pride banned law enforcement exhibitors from Pride events until 2025, noting their presence can be “threatening, and at times dangerous, to those in our community who are most often targeted with excessive force and/or without reason.” Police officers who identify as LGBTQ can participate in events as individuals, out of uniform. The Gay Officers Action League said it was “disheartened” by the news.