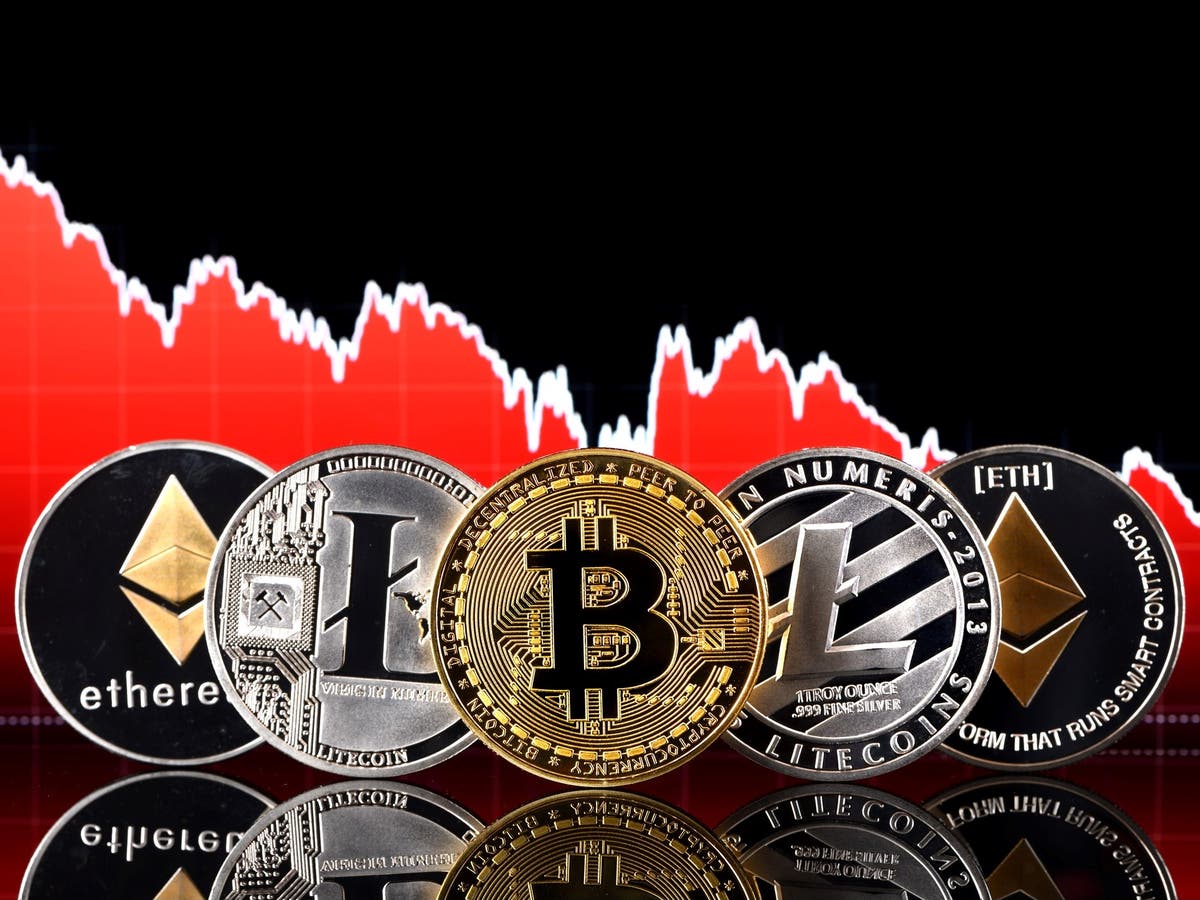 The price of bitcoin has crashed once again over the weekend, leading a market-wide nosedive that shows no signs of slowing down on Monday morning.

Nearly $200 billion was wiped from the cryptocurrency market since Sunday, adding to a further $200bn in losses over the last week.

Bitcoin was back below $33,000 at the start of the week for the first time since early June, though it still remains way up when looking at the year-on-year charts for 2021.

The latest drop has led to fears that more losses could be on the way, as a pattern known as the “death cross” has been reached. This is where the 50-day moving price average falls below the 200-day moving average, potentially signalling the arrival of a bear market.

Other leading cryptocurrencies also suffered, with Ethereum (ether), Cardano (ada), Binance Coin and dogecoin all dropping by a similar margin to bitcoin.

You can follow all the latest news, analysis and expert price predictions for the crypto market right here.

Bitcoin has passed through a so-called “death cross” today, marking the first time in 2021 that such a price pattern has occurred.

Such events can prove catastrophic for traditional markets (seen during both the Wall Street Crash of 1929 and the 2008 Financial Crisis) but cryptocurrency can be harder to pin down.

It is actually the seventh death cross since 2013 for bitcoin, with the last two actually resulting in massive gains. For a run down of what this milestone means, you can read the full story here:

MicroStrategy’s doubling down on bitcoin amid a price crash has proved divisive among market watchers. Bitcoin advocates see it as a strong show of faith for the cryptocurrency, while shareholders appear less convinced.

The software firm’s share price dropped 8 per cent on Monday following the news. The investment is also down more than $60 million since the time it was made and the time it was announced due to the current market downturn.

You can read more on the story from The Independent’s tech editor Andrew Griffin right here.

MicroStrategy buys another half a billion dollars worth of bitcoin

MicroStrategy CEO Michael Saylor says his firm has ploughed another massive chunk of cash into bitcoin.

An additional 13,005 bitcoins takes the software company’s total holdings above 100,000, strengthening its position as the largest corporate investor into the cryptocurrency, ahead of Tesla.

Bought for $489 million, the current price crash means the latest batch are now actually only worth around $422m – a $67m loss. Bitcoin would need to fall below $26,000 for MicroStrategy to be at a net loss for all its holdings.

Glen Goodman, market analyst and author of The Crypto Trader, says bitcoin faces a “moment of truth” as it nears the end of a possible price pattern.

The head-and-shoulders pattern that began to form back in January is nearing the end of the second neck line, meaning the next market movements could prove crucial to bitcoin’s future trajectory.

“Completion would be red arrow. Failure green arrow,” he wrote in late May.

The left shoulder found resistance at around $30,000, which is where we are currently heading.

Moment-of-truth time for this #Bitcoin head-and-shoulders pattern soon. It's testing the support line once again. Exchange analysis shows thousands of short-sellers now trying to push the price below the line….https://t.co/lB4ARkmMa8

As the price of bitcoin continues to crash – it just fell below $32,000 – not everyone is pessimistic about its prospects.

Renowned bitcoin price analyst PlanB remains firmly bullish on the cryptocurrency’s future, sticking by his Stock-to-Flow Model that charts the price against its in-built scarcity. (You can read more about that model here).

The pseudonymous Dutch expert claims the latest crash was caused by “FUD” (fear, uncertainty and doubt) brought about by negative news within the crypto space, but this could turn-around in the second half of 2021. His most pessimistic prediction? $100k+ by the end of the year.

Bitcoin is below $34K, triggered by Elon Musk's energy FUD and China's mining crack down.

Billionaire investor Steve Cohen says he has done a “deep dive” into cryptocurrency and is now “fully converted”.

The CEO of asset management firm Point72, which has more than $20 billion in AUM, said in an interview that his interest is focussed on the blockchain technology underpinning bitcoin.

“I’m hopeful that we will be able to start building something within Point72… We are in the process of starting to think about that,” he said.

“I’m not missing this. I’m not going to miss this. I already feel like I missed the first part of it, but I still feel like it’s early.”

For some analysts, this event is an indicator that the market has switched from a bull market to a bear market – meaning more losses are expected to follow.

For others, this pattern is a lagging signal that most damage is actually already done.

“Ironically, death crosses are often a sign that the worst is already behind us.”

Here’s what the so-called death cross actually looks like:

The latest losses may have been spurred on by concerns that China will continue to crackdown on bitcoin mining.

The ban has already been expanded to the province of Sichuan, where authorities ordered the closure of 26 mining facilities last week.

In the long term, this could actually be good news for the cryptocurrency, as the majority of the bitcoin mines in China ran off non-renewable sources like coal. It is hoped that miners will shift to countries and locations that favour clean energy.

Hello and welcome to The Independent’s live coverage of the cryptocurrency market.

The price of bitcoin has continued to crash on Monday morning, following a market-wide downturn over the weekend.

A 7 per cent price fall over the last 24 hours for BTC was mirrored by other leading cryptocurrencies, with Ethereum (ether), Cardano (ada), Binance Coin and dogecoin all falling by between 5-10 per cent since Sunday.

We’ll have all the latest news and analysis from market experts right here.