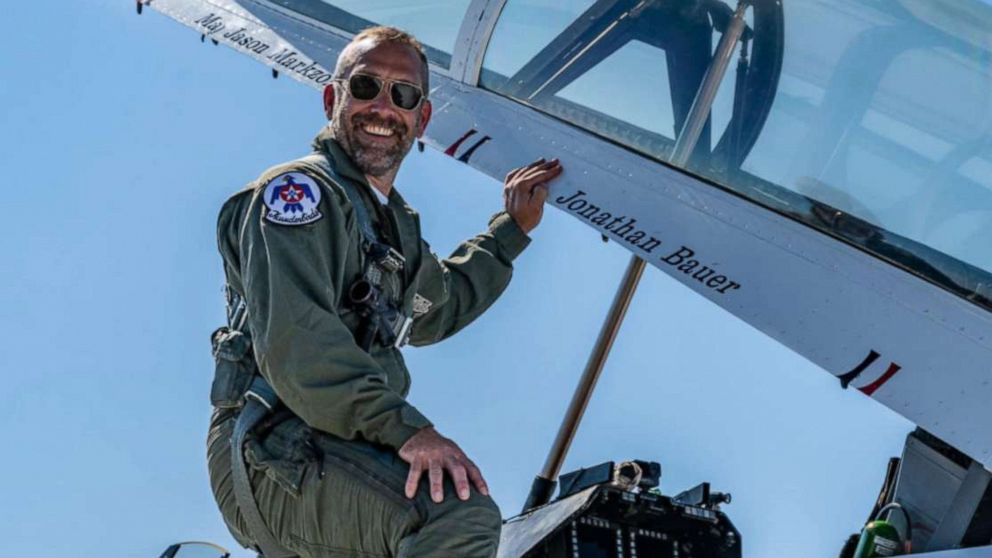 A man who jumped off a bridge to save a 2-year-old girl who plunged into a bay during a car crash has been honored with a Thunderbirds flight in Maryland.

Jonathan Bauer sprung into action on May 2 when he and his daughter were out running errands and saw a truck swerve on the Route 90 bridge.

The truck hit a cement barrier and flipped onto the guardrail, resulting in a five-vehicle crash.

Bauer ran over to the truck, which was leaning over the edge of the overpass above Assawoman Bay. A man who got himself out of the truck pointed down to the water, where a child was struggling to stay afloat.

“When I looked over, I saw the car seat … and then about 6 feet away from the car seat was a little girl. She was on her back, completely floating, head completely out of the water, arms moving, legs kicking,” Bauer said to ABC Washington, D.C., affiliate WJLA.

The child was “ejected from a pickup truck with her car seat, landing in the bay below,” the Ocean City Police Department said in a statement.

Bauer plunged into the water 25 feet below and swam to the child, patting her back until she split up water and took a deep breath.

A nearby boat picked him up and the child was handed over to first responders once they reached land. She was flown to Johns Hopkins Children’s Hospital in Baltimore and said to be in stable condition after the incident, officials said. Seven others injured in the pileup were released from the hospital.

No one knew at first who’d saved the child because Bauer initially didn’t want to be named.

On Saturday, Bauer was honored by the Air Force Thunderbirds before the Air Show in Ocean City.

The Thunderbirds praised his brave rescue in an Instagram post on Saturday saying, “His selfless act shows the best America has to offer, and we’re proud to have honored him with a flight today.”