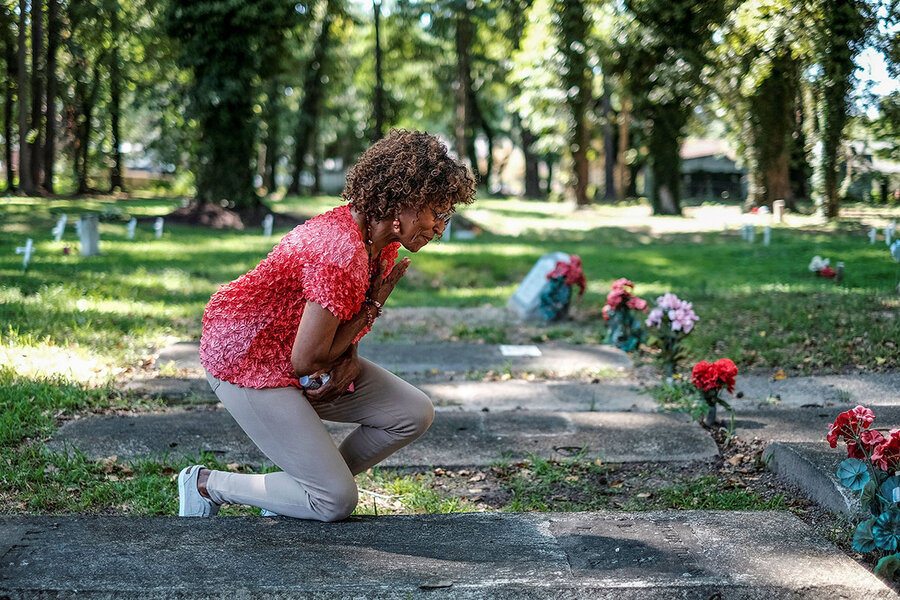 Frank Washington was making preparations to bury his aunt in a small family cemetery in the historic Virginia community of Thoroughfare when he found a gate barring access to the graveyard.

The town, an hour west of Washington, D.C., dates back to the 1800s when it was settled by freed slaves and Native Americans. Small burial grounds are scattered throughout the area – some still in use, some forgotten entirely.

The ownership legalities behind many of these plots can be fuzzy, Mr. Washington said, but the discovery a few months ago of the gate belonging to a nearby brewery that owns access to the property still came as a shock.

“The deeds are so old that it’s hard to find some of these things,” Mr. Washington said.

“Most of these were family sites, and [ownership] was not documented the way it was for those who weren’t people of color,” he told the Thomson Reuters Foundation by phone.

When Mr. Washington and other residents decided to look into the situation with other cemeteries in town, they found one bulldozed and more under threat, and also rediscovered several others.

The sense of crisis in Thoroughfare echoes a growing urgency across the country to stop the destruction of African-American burial grounds, said Kelley Fanto Deetz, co-CEO of the History, Arts and Science Action Network.

“People are absolutely starting to realize that these kinds of historical injustices need to be addressed now. So there is a change coming,” she said.

Bill DeWitt, whose wife owns the Farm Brewery at Broad Run, said the gate has been on that lane for years and was recently moved closer to the highway, but does not cut off all access to the graveyard.

“It is locked as it borders brewery property and we have to control access,” he said in an email.

“The descendants have access through brewery property whenever they want it. They can drive right up to the cemetery,” which is on property owned by someone else, he said.

Historians say Black graveyards were vulnerable from their beginnings.

“A lot of the early burial grounds were associated with plantations or land that people didn’t own,” said Barbara Heath, president of the national Society for Historical Archaeology.

“They’re really vulnerable to development if people don’t know they’re there,” she said.

‘A chance to honor that space’

There are no national estimates on the number of Black cemeteries that are under threat from developers or have been abandoned.

In Florida, where the governor this month signed a bill creating a task force to study the issue, lawmakers estimate there could be as many as 3,000.

Ms. Heath and others have been supporting bills in Congress that would create a database of African-American cemeteries across the country and fund education and preservation programs.

Representative A. Donald McEachin, a lead sponsor on the House bill, called the cemeteries an “essential part” of the country’s history.

“For too long, African-American cemeteries have been abused and neglected,” he said in an emailed statement.

Michael L. Blakey, an anthropology professor at the College of William and Mary who has worked on the issue for decades, said local governments and communities need to work together to save early burial grounds from development.

“It is most important that descendant communities are the empowered stewards of these cemeteries, brought under the protection of municipalities,” he said in an email.

A database would not stop developers building on cemetery land, said Kelly Lizarraga, advocacy coordinator for the Washington, D.C.-based Coalition for American Heritage.

But it could head off “the more typical story” in which remains are found only after development begins, she said.

“You can give the community a chance to honor that space [beforehand],” she said.

Ms. Deetz at HASAN, for instance, is helping descendants near Washington, where thousands of gravestones from a primarily Black cemetery demolished in the 1960s were recently discovered being used to reinforce a home’s riverside property.

And in Baltimore, Coppin State University cultural anthropologist Elgin Klugh is uncovering what appears to have been a large burial ground beneath a shopping center complex.

While records say up to 500 bodies were moved to a new burial ground when the cemetery closed in 1958, Mr. Klugh and his team now think that upwards of 42,000 people could have been buried at the site.

“How does a cemetery that large simply get erased?” he asked.

Mr. Klugh and others are working on an oral history project and seeking to create a memorial to those buried at the site.

One example of such a memorial is in Alexandria, Virginia, where a cemetery for about 1,700 former slaves was rediscovered in the 1980s beneath a gas station and office building, said Eleanor Breen, the city archaeologist.

After years of advocacy by Alexandria residents, the city purchased the property, removed the buildings, recovered more than 600 graves, and turned the parcel into a public memorial.

“Creating the memorial and reconciling the past treatment of African Americans in the city was a really informative and healing process for Alexandria residents,” Breen said.

In Thoroughfare, Frank Washington is at the beginning of that process.

He and others in a new community activist group, the Coalition to Save Historic Thoroughfare, have been pushing county officials to halt development in the town pending a full assessment.

Virginia law requires that a developer who finds a burial ground stop work, notify the police, and apply for a reburial permit, said Randall Jones with the Virginia Department of Historic Resources.

But more protections are needed, said Pete Candland, who sits on the Prince William Board of County Supervisors.

On Tuesday, the county voted to fund archaeological surveys in the area, better map known cemeteries on private property, and look into creating an additional layer of regulatory oversight for development in Thoroughfare.

Noting that there are more than 400 known family cemeteries and gravesites in Prince William County alone, Mr. Candland said the burial grounds need to be “protected at all costs, so we honor these folks who are still living but also keep their [ancestors’] stories alive for future generations.”

But the proposed actions would do little to address the immediate needs to protect the cemeteries, Mr. Washington said.

“My biggest fear is that somehow other graves will suffer the same fate – bulldozed over without anyone knowing it’s too late,” he said.