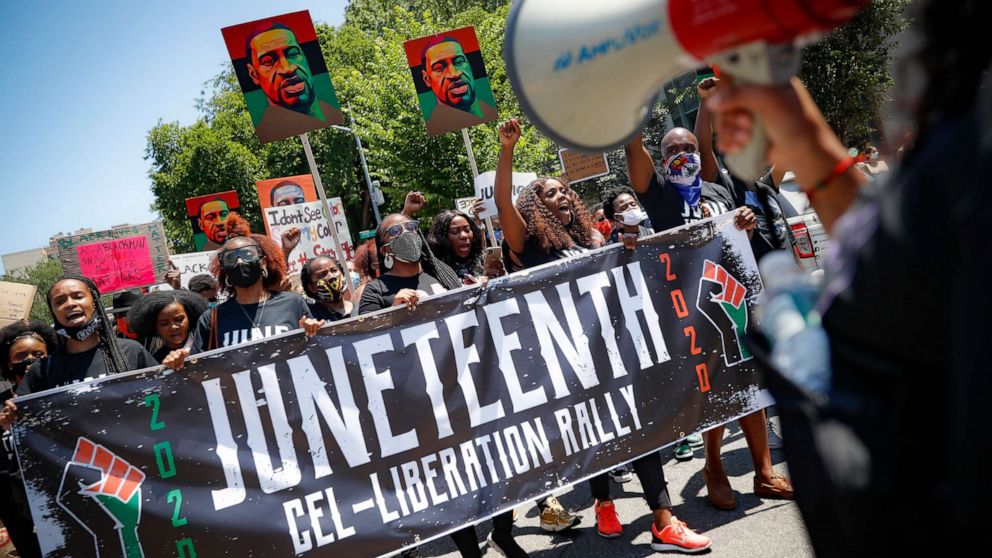 Now that Juneteenth has been recognized as a national holiday to commemorate the end of slavery in the U.S., just in time for Saturday’s June 19 anniversary, advocates are weighing in on how Americans should mark the occasion and what the day should mean to the country going forward.

“Juneteenth is not a Black thing, and it’s not a Texas thing,” Ms. Opal Lee, whom President Joe Biden called the “grandmother of the movement” to make Juneteenth a holiday, told ABC News’ “GMA3: What You Need to Know Friday.

Lee walked from her home in Fort Worth to Washington five years ago at age 89 to raise awareness of the holiday and said she was “ecstatic” and “overjoyed” to witness Biden sign the bill and make it official on Thursday.

“I was so happy I could have done a holy dance,” she said.

But she doesn’t just walk the walk.

Lee and advocates say Juneteenth’s elevation to a federal holiday now is an opportunity for all Americans — not just African Americans — to celebrate freedom and better understand the institution of slavery.

Watch “Juneteenth: Together We Triumph — A Soul of a Nation Special Event” on FRIDAY at 9 p.m. ET and next day on Hulu.

“It’s a subject that makes some people uncomfortable and ashamed, but it is a part of who we were and a part of what helped us become the great nation that we are,” Daina Ramey Berry, chair of the history department at the University of Texas at Austin, told ABC News.

“That’s the beauty of this holiday,” she added. “There’s so much room here for us to grow and understand more about American history.”

Federal workers and officials in Washington are already enjoying an unexpected Friday off — as states, localities and groups all over the country mark the occasion on Saturday’s 156th anniversary. Lee is continuing her campaign by walking 2.5 miles, she says, to represent the two and a half years slaves in Texas didn’t know they were free — the origin story of Juneteenth.

“When people understand what actually happened, they can digest it and decide that this doesn’t have to happen again,” Lee said.

What is Juneteenth, and what’s the significance of its new distinction?

For generations for African Americans, Juneteenth — also known as Freedom Day, Liberation Day and Emancipation Day — has been a day to celebrate freedom with parades and festivities similar to those on the Fourth of July. During the Jim Crow era, the Black community had to hold these celebrations in private, but they gained new momentum in recent history.

Vice President Kamala Harris said Thursday that its designation as a national holiday — joining 10 annual paid federal holidays in the U.S. — is significant in that “these are days when we, as a nation, have decided to stop and take stock, and often to acknowledge our history.”

According to a Gallup poll last month, more than two in three Black Americans (69%) say they have a lot or some knowledge about Juneteenth, compared with 40% of Hispanics and 31% of white Americans.

Not often in highlighted in the nation’s history books — if there at all — it’s a day not everyone has heard of.

Advocates hope that will now change.

What’s next for celebrating the holiday?

Berry, an expert in African American history, said just as educators did with Martin Luther King Jr. Day when it became a federal holiday in 1983, lesson plans can be built around Juneteenth. Its new distinction as a national holiday may allow historians new grants and to uncover new facts about the 250,000 final enslaved Americans in Texas, she noted.

“Why don’t we learn from their stories, learn about their experiences from slavery, understand what freedom meant to them?” Berry said of those still enslaved after the war. “I think that would go a long way in understanding what freedom means for us today.”

Although the distinction comes during a debate over how to teach the foundations of slavery and its lasting impacts, the same Gallup poll from May found that Americans were actually more supportive of teaching the history of Juneteenth in schools than of making it a federal holiday. Nearly half of respondents said Juneteenth should be added to public schools’ history curriculum whereas 35% of Americans said last month it should be a national holiday.

Though experts have argued its significance in state legislatures for decades, even succeeding in getting Juneteenth recognized as a holiday everywhere but South Dakota, it took Congress just two days to pass the legislation once one Republican senator dropped his opposition. The bill then passed the Senate by unanimous consent on Wednesday before passing the House Thursday night in a 415-14 vote, with all opposition coming from GOP members.

Despite the bipartisan victory, advocates said the country is still far from healing the wounds from America’s “original sin.”

The president on Thursday also said Juneteenth is a reminder to “rededicate ourselves to action.” He pointed to voting rights and what he called the “assault” by Republicans to restrict Black voters.

“We can’t rest until the promise of equality is fulfilled for every one of us in every corner of this nation. That, to me, is the meaning of Juneteenth,” Biden said.

Washington D.C. Mayor Muriel Bowser, echoed that message the same day and tied in the issue of D.C. statehood, saying “color me skeptical,” when asked about Congress taking such swift action on the national holiday while, she said, failing to address other policy issues.

Democratic Rep. Sheila Jackson Lee of Texas, and other advocates, point to passing legislation like H.R. 40, a bill that specifically calls for the creation of a commission to study reparations, as a way to fulfill that promise. It passed out of House committee for the first time earlier this year, but is still waiting a full floor vote.

“Now that we’ve gotten the recognition, we can build off that momentum for reparations,” said Deborah Evans, communications director with the National Juneteenth Observance Foundation.

There’s also the glaring absence, Evans said, of national policing reform more than a year after the killing of George Floyd — which helped elevate Juneteenth as a national holiday. Companies, including Nike and Twitter, signed on to make Juneteenth a paid day off for the first time last year during what was called a nationwide reckoning on race.

An opportunity to educate all Americans

Beyond policy, advocates hope Juneteenth’s new distinction is an opportunity to educate — and celebrate.

Anthony Brown, a social studies professor who teaches on race matters at the University of Texas, said he hopes Juneteenth being recognized as a national holiday will provide a platform for teachers and community educators to have a space to discuss the history so that people can connect freedom in 1865 to freedom in 2021.

“If you took a picture of what kinds of things we do as Americans during the Fourth of July, you’ll see the same kinds of activities at a Juneteenth celebration,” he told ABC News. “I think it’s a tremendous opportunity for unity. To not know its full history would be a travesty. And nothing good comes from when you don’t know your neighbor.”

Evans, who fought for three decades to make Juneteenth a federal holiday, also said it allows a chance to go back and correct history. She said her attention now is to research and educate others on the real history of Juneteenth — like that 9,000 Black Union troops helped free the final 250,000 slaves in Galveston, she said, to which Berry agreed, though their stories are often forgotten.

“We want to train not only the children but we’ve got to go back and train the children’s first teachers, their parents, because many do not know about Juneteenth,” she said

Berry also emphasized that in the earliest celebrations of Juneteenth, education was essential to the festivities — and suggested that stay central to celebrations moving forward.

“While people are celebrating different foods, I just hope that the moment of reflection is also part of this holiday,” she said. “It was always about education and making sure that everybody understood what they had experienced during slavery. So this is a moment for us to celebrate freedom, but also to understand and recognize the history.”

She said, as did most advocates, that Juneteenth becoming a holiday doesn’t erase racial disparities in the U.S., but allows a better opportunity to address them.

“It doesn’t mean that this settles everything and it doesn’t mean that we don’t have issues to still address, it does. We have disparities,” Berry said. “But by bringing this to a federal holiday, to celebrate freedom, allows us an opportunity to address the disparities and inequalities that we have that are still resonant in this country.”