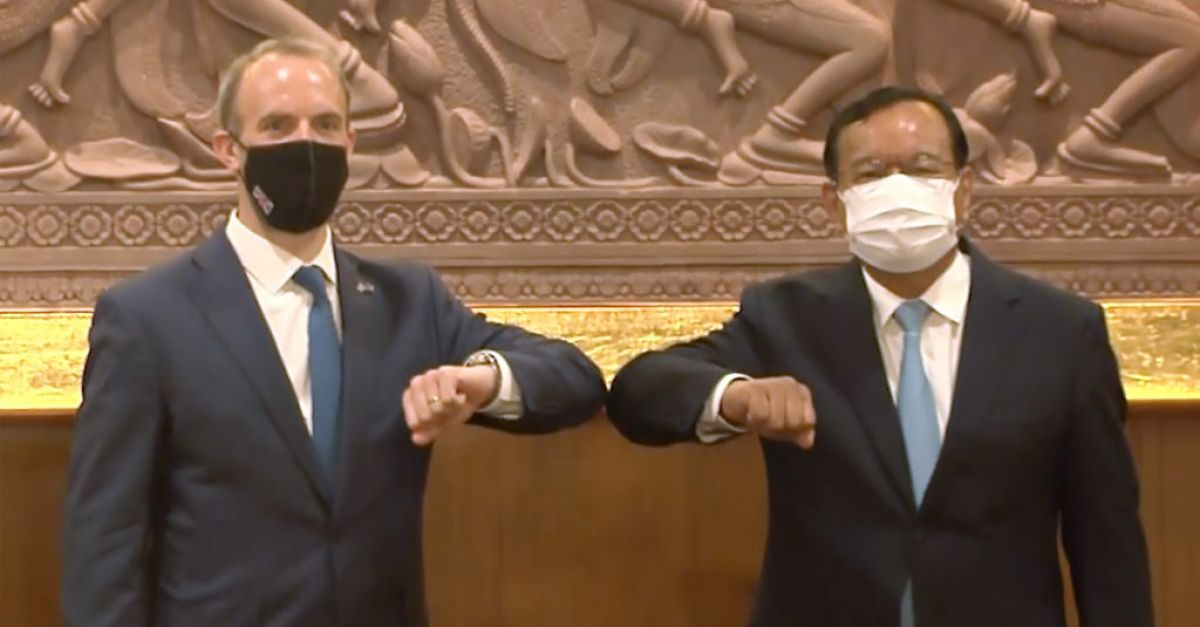 Foreign Secretary Dominic Raab has met his Cambodian counterpart as he pushes for closer economic relations with south-east Asian nations.

Mr Raab held talks with Cambodian foreign minister Prak Sokhonn in Phnom Penh in what his office said was the first visit of a UK foreign secretary to Cambodia since the British Embassy was reopened 30 years ago.

Cambodia is set to take over the rotating annual chairmanship next year of the Association of South-East Asian Nations (Asean), and Mr Raab’s office said he would make the case for Britain to attain “dialogue partnership” with the 10-nation bloc – the closest relationship possible for non-member countries.

View at dawn over Phnom Penh’s Mekong River – the first, I’m told, for a British Foreign Secretary since 1953. Here to boost trade, support Cambodia’s energy transition, expand UK ASEAN cooperation – and as a force for good in the Indo-Pacific. #GlobalBritain pic.twitter.com/EJl9R4fUEq

Mr Raab tweeted ahead of the meeting: “Here to boost trade, support Cambodia’s energy transition, expand UK ASEAN cooperation — and as a force for good in the Indo-Pacific.”

The UK is currently pursuing a “tilt” towards the Indo-Pacific region in response to China’s growing influence on the world stage, following a recommendation by a recent Government review of defence and foreign policy.

Beyond trade, the UK earlier this year dispatched a strike group led by the Royal Navy’s flagship aircraft carrier the HMS Queen Elizabeth on a 28-week deployment to Asia.

As Mr Raab met officials, human rights observers noted that Cambodia has recently arrested and imprisoned environmental activists, and urged the Foreign Secretary to call for their release, as well as that of around 70 other political prisoners.

“Foreign Secretary Raab’s visit comes in the midst of a human rights crisis in Cambodia, and both his talking points and public pronouncements need to reflect that,” said Phil Robertson, Human Rights Watch’s deputy Asia director.

“The UK should also ensure any future trade preferences granted to Cambodia be firmly based on improvements in civil and political rights.”

Following his meeting with the country’s foreign minister, Mr Raab tweeted that the two had talked about “our shared priorities such as trade, human rights & #Myanmar,” but did not elaborate.

Ministry spokesperson Neth Pheaktra said in a tweet that the two had talked about “joint priorities” including human rights, trade, Covid-19 and Myanmar. He did not provide further details.

Mr Raab started his three-country trip in Vietnam, and will head to Singapore after his visit to Cambodia.

The trip marks his fifth visit to south-east Asia as Foreign Secretary.