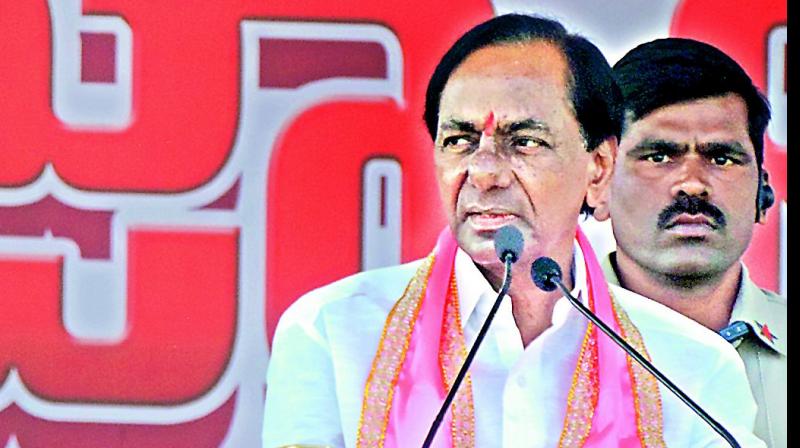 Hyderabad: None in contemporary Telugu politics might be able to match Chief Minister K. Chandrashekar Rao’s wit and sense of humour while addressing public meetings.

It was the turn of participants at the inauguration of Siddipet integrated district offices complex on Sunday to burst into laughter repeatedly.

Referring to the implementation of goat-farming scheme on a massive scale, the Chief Minister said someone known to him was highly appreciative of the scheme and told him that he could see gorrelu (goat) everywhere in the state. The CM also spoke of the beneficiaries calling them KCR gorrelu. “Thank God, they did not call KCR a gorre,” he said.

Narrating his experience of attending a marriage in Covid times, the Chief Ninister said the bridegroom urged him to remove the mask. When he tried to know why, the groom replied: “nuvvu malli dorkav sir (You may not come again).

“Mask teesthe nenu carona ku dorkutanra bai (I may get infected if I remove the mask), was how the CM replied to the groom. “And, I got infected because of the jostling of the crowd,” the CM said.

The Chief Minister heaped praise on his nephew and finance minister T. Harish Rao, who represents Siddipet in the Assembly.

The CM said he was happy to see heavy plantation on both sides of the roads and in the traffic medians, and hence dropped the idea of making surprise inspections to see the progress in the implementation of the green drive.

After a lengthy speech, the CM said he was getting late for another programme in Kamareddy district. “It’s getting late. You may be hungry. I am also hungry. I came to Siddipet hoping that Harish will feed us. Will he do it,” he asked as Harish  Rao sported his trademark smile.