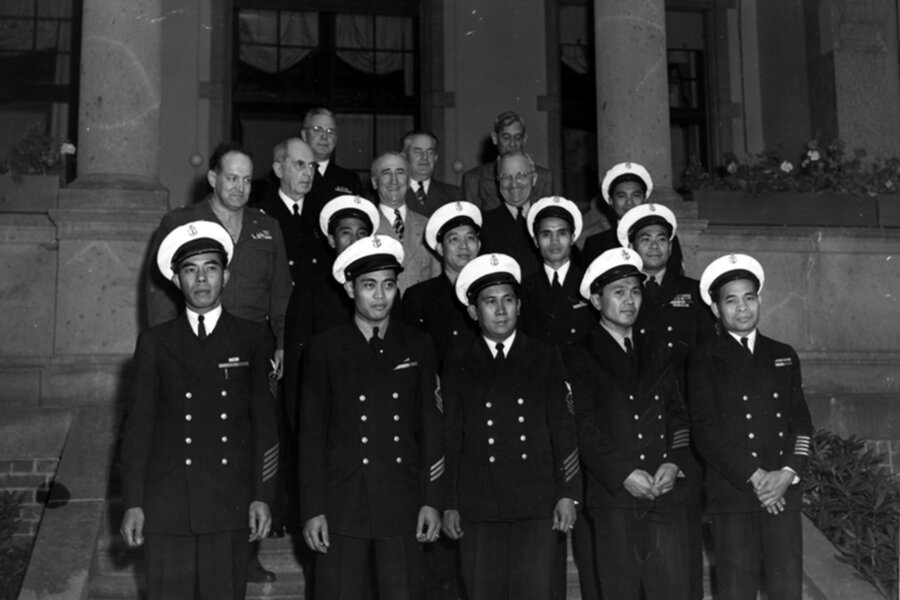 Asian Americans, veterans, and civilians in the United States and the Philippines are campaigning to name a Navy warship for a Filipino sailor who bravely rescued two crew members when their ship caught fire more than a century ago, earning him a prestigious and rare Medal of Honor.

Supporters say naming a ship for Telesforo Trinidad would honor not just the only Asian American in the U.S. Navy granted the nation’s highest award for valor, but the tens of thousands of Filipinos and Americans of Filipino descent who have served in the U.S. Navy since 1901, when the Philippines was a U.S. territory.

“I don’t believe it’s a long shot at all; it may be a long timeline, but we’re hoping it’s not,” said retired Navy Capt. Ron Ravelo and chair of the campaign. “We’re going to be making Navy ships into the foreseeable future, and there’s no reason one of those can’t bear the name of Telesforo Trinidad.”

Mr. Trinidad, who died in 1968 at age 77, was so eager to join the U.S. Navy that he stowed away on a lifeboat from his home island of Panay to the main island to enlist, said grandson Rene Trinidad. In 1915, while on patrol on the USS San Diego, he risked his life and suffered burns to rescue two crewmates when boilers exploded, killing nine. He received the medal that year, at a time when the honor could be awarded for non-combat valor.

Rene Trinidad, a real estate agent in Southern California, recalls his grandfather was a man of few words.

“He let his actions speak for himself,” he said, “and I suppose that’s why he did what he did.”

The campaign has grassroots enthusiasm, and support from Democratic Congress members who sent a letter last month to Thomas Harker, acting secretary of the Navy.

Traditionally, different types of ships have different naming conventions, but there are exceptions, said Samuel J. Cox, retired rear admiral and director of the Naval History and Heritage Command, which suggests names and has previously submitted Trinidad’s for consideration. The secretary of the Navy has final authority and discretion to name and rename ships, he said.

Some memorialize states, U.S. cities, Navy heroes, or distinguished Americans. The number of Navy ships receiving names varies widely by year but averages roughly to about eight, of which three or four are named for people, Mr. Cox said.

“There simply are far too many heroes compared to the number of ships to be named,” he said.

“And I hate to say this, I’m getting a little pain when I say this: Increasingly it becomes political – what party you’re in and who’s in the White House, and occasionally the White House gets involved,” Mr. Polmar said.

In January 2020, Acting Secretary of the Navy Thomas Modly named a nuclear-powered aircraft carrier after Doris “Dorie” Miller, an African American enlisted sailor who received the Navy Cross for his actions during Japan’s attack on Pearl Harbor.

The naming did not sit well with critics who say Mr. Miller deserves to have a ship named after him, but not an elite aircraft carrier bearing the names of presidents. There’s also ongoing debate over ships named for the Civil War Confederacy.

Cecilia Gaerlan, Trinidad campaign board member, said they would like a Navy surface combatant, such as a destroyer or frigate, named for the fireman second class. The naming would be a symbol of the Navy’s commitment to “diversity, equality, and inclusion during this time of national racial tensions and unwarranted violence against Asian Americans and Pacific Islanders,” said Democratic U.S. Rep. Sara Jacobs of California, in a May letter to Mr. Harker signed by 10 others.

There are other Navy vessels named for Asian Americans and Pacific Islanders, including the USS Daniel Inouye, a destroyer. The former U.S. senator received the Medal of Honor as part of the celebrated 442nd Infantry Regiment, made up of Americans of Japanese descent whose families were incarcerated in camps during World War II.

There was a U.S. Navy ship named for a Filipino person, but Ms. Gaerlan says the USS Rizal, a destroyer in service from 1919 to 1931, was donated by the Philippine Legislature and honors José Rizal, a national hero who never served in the military.

More than two dozen Asian and Pacific Americans have been awarded the Medal of Honor since its creation during the Civil War, mostly in the U.S. Army, according to the Congressional Medal of Honor Society. There are roughly 3,500 recipients.

Telesforo Trinidad, born in 1890, enlisted in 1910 in the Insular Force established by then-President William McKinley and served in both world wars. More than 250,000 Filipino soldiers served in World War II, and thousands died during the brutal 1942 Bataan Death March in the Philippines.

Rene Trinidad said it goes against his cultural upbringing to call attention to his grandfather’s heroism, but his late father wanted the  recognition for his father, who overcame hardship, merited a medal, and worked hard to provide for his family. Two sons followed him into the U.S. Navy.

“The bottom line is that Filipinos be recognized for their contribution to the United States, and that every Filipino should be proud of that as well,” he said.

The Jussie Smollett trial: Timeline of how this case ended up in court

Ghislaine Maxwell goes on trial: What to know about Jeffrey Epstein’s ex-girlfriend