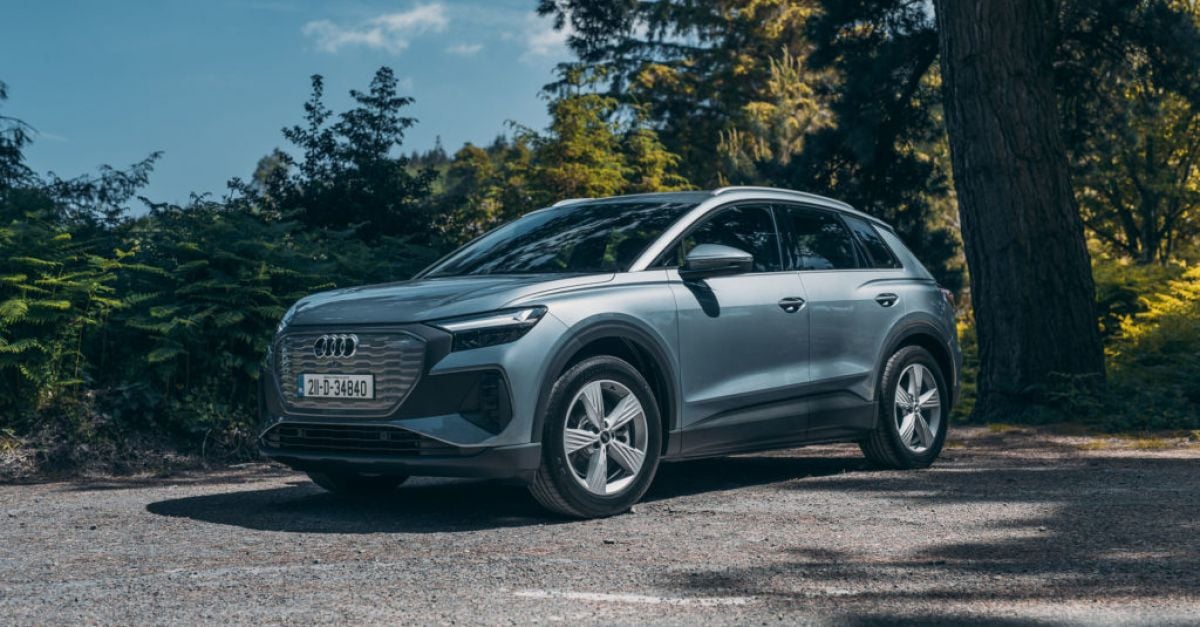 And then there were three. Three medium-sized SUVs, all with electric power, and all sharing the same basic platform, batteries, and motors. In ascending order of cost, they are the Volkswagen ID.4 (which, confusingly, has the lowest price thanks to a low-spec, small-battery, bargain model), the Skoda Enyaq (which, conversely, probably offers the best value when you take battery capacity and range into account), and now the Audi Q4 e-Tron.

Unlike the other two, this is not Audi’s first electric car, nor even its second; it’s the third all-battery Audi to go on sale, following on from the e-Tron quattro SUV, and the e-Tron GT four-door luxury saloon. Unlike the other two, which reach up to and into the six-figure stratosphere with their price tags, the Q4 eTron is almost affordable.

So, your choice is this: a Skoda with a bigger boot, a 204hp motor, a 58kWh (usable) battery, and a 412km range, or go for the posher badge, the arguably sharper suit, and a 335km range from a smaller battery.

Actually, to be honest, not many people will make that kind of value judgment. A buyer whose heart is set on an Audi is not likely to start cross-shopping a Skoda, but we’d be remiss if we didn’t point out the price differential.

Much more likely, at least so far according to Audi Ireland, is that buyers will go for the pricier 77kWh (usable) battery version, badged as Q4 40 e-Tron, in tastier Sport spec, with a range of 510km, and a price tag of €50,635. Spec up a long-range Skoda Enyaq 80 to that kind of level and, actually, the price differential isn’t all that huge.
Platform

Neither, though, is the mechanical package all that different. The Audi, VW and Skoda all use the same MEB electric car platform, the same batteries, and the same electric motor mounted under the boot.

There will be two-motor, four-wheel drive versions (ID.4 GTX, Enyaq 80x, and Q4 50 e-Tron quattro) but none of those arrive until later this year at the earliest. For the most part, all three cars will roll off forecourts with the same 204hp motor mounted under the boot floor, driving the rear wheels.

So, in driving terms, there’s not a whole heap to separate this new Audi from its VW Group stablemates. It has the same whisper-quiet rolling refinement, and on the 19-inch wheels of our basic Advance-spec test car, a very easygoing ride quality. The Q4 feels pleasantly brisk, hitting 100km/h in a reasonable 8.5 seconds, and it has light, direct steering and sure-footed handling.

Actually, a bit too easygoing – there’s a little too much vertical movement over poor surfaces, so it might be worth sacrificing a little comfort for the added body control of sportier suspension and 20 or 21-inch wheels. Adaptive suspension is also on the options list, and could well be worth the candle.

The Q4 feels pleasantly brisk, hitting 100km/h in a reasonable 8.5 seconds, and it has light, direct steering (accessed through a slightly odd “squircle” wheel, with a flat top and bottom – shades of the 1970s Austin Allegro?) and sure-footed handling. It’s neither taxing to drive, nor especially invigorating, but it’s likely that buyers will mostly appreciate its long-haul comfort and refinement.

Long haul, in an electric car? Oh yes. Officially, our test car comes with a 510km one-charge range, and on an 85 per cent battery charge was showing 389km until we’d need to find a socket.

Driven over a mixture of motorway, city, town, and fast, flowing, steep mountain roads, we averaged 16.9kWh per 100km (slightly better than Audi’s claim of 17.3kWh/100km) and felt not the tiniest twinge of range anxiety. As long as you have a charger at home, and suss out where the rapid chargers are on your intended route (and the bigger-battery Q4 can charge at up to 125kW from a DC power source) then life with this electric Audi should prove pretty painless.

There’s a big boot (520 litres) and lots of legroom and headroom in the rear seats. Thanks to the MEB platform’s long-wheelbase, flat-floor layout, the Q4 can basically squeeze Q5 interior space into a package that’s basically the same size as the Q3 on the outside. It’s also handsome – more so than it looks in the photos, although the big, blanked-off grille struggles for elegance.

The dashboard is broadly similar to that of the Q4 and Q3 (with, thankfully, proper physical buttons for the heating and air conditioning) and exudes the usual feeling of hefty Audi quality. It’s not leagues ahead of the Skoda Enyaq for cabin fit and finish, though, although we do like the “floating” centre console, and the deep storage areas in the doors and under the driver’s elbow.

Given the mixture of premium-badge appeal, the strength of the Audi brand in itself, and the impressive all-round electric performance, it’d be hard to see the Q4 being anything other than a massive success.

Arguably, it shows up the bigger, more expensive e-Tron quattro for being too pricey, and too short-ranged (although major battery improvements are apparently on the way for that car), but Audi Ireland reckons that the Q4 will pull buyers in from other brands, and will draw existing Audi customers out of their similarly-priced Q3s, Q5s, A4s and A6s.

If that’s the case, they’ll be getting an impressive electric car – but they should totally check out the Skoda before they buy.

BMW pushes the boundaries of vehicle aesthetics with the XM concept

Jeremy Clarkson, Richard Hammond and James May on their latest adventures in France