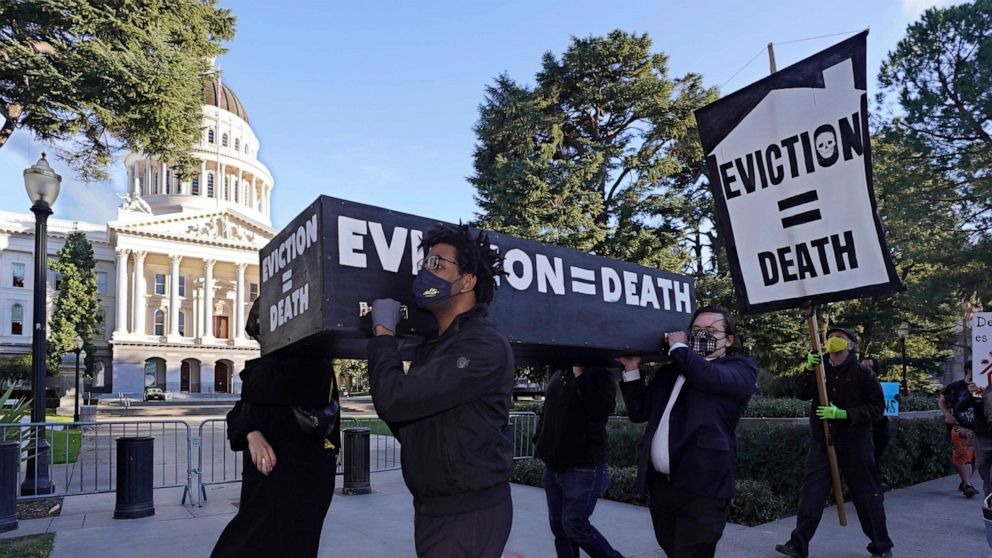 Several leading progressive Democrats on Capitol Hill have urged the White House and the Centers for Disease Control and Prevention to extend and strengthen a federal eviction moratorium that is set to expire at the end of the month.

In a new letter sent late Monday, led by Reps. Ayanna Pressley, D-Mass.; Cori Bush, D-Mo. and Jimmy Gomez, D-Calif., and co-signed by 41 other House Democrats, the members of Congress call the issue an “urgent matter of health, racial and economic justice.”

They argue that communities with lower vaccination rates and higher COVID-19 cases also often have many renters “at heightened risk of eviction.”

“Allowing the moratorium to expire before vaccination rates increase in marginalized communities could lead to increased spread of, and deaths from, COVID-19,” the letter reads.

“Evictions take lives and push households deeper into poverty, impacting everything from health outcomes to educational attainment. As workers and families across the country are just beginning to recoup from the trauma and economic hardship caused by the COVID-19 pandemic, we must take all necessary action to protect them from becoming unhoused during this vulnerable time,” the letter continues.

When asked about the fast-approaching deadline and the letter from the members of Congress, a White House official said that the decision to extend or lift the moratorium will be made by the CDC based on public health conditions. The official added that the Biden administration had been actively working to activate “anti-eviction policies” at the state and local level to keep Americans “safe and housed.”

The various COVID relief packages passed by Congress last fall and early this year allocated more than $46 billion in funding for emergency rental assistance. However, housing experts and the authors of the new congressional letter argue that setting up local and state systems to administer that aid has taken time and many renters are still struggling to navigate the paperwork and receive help.

According to Beth Mellen, the supervising attorney in the Housing Unit of the Legal Aid Society of Washington, D.C., the District of Columbia’s new emergency rental assistance program established in April has received over 20,000 applications but has only processed around 2,000. She said when a family is evicted from their rental property, not only are children less likely to do well in school, but parents are also less likely to get new work if they are out of a job.

“In D.C., we have a lot moratorium that is going to keep protecting tenant, but if we didn’t have that, I would be really scared right now for those 18,000 applications still pending,” Mellen told ABC News. “I understand landlords are frustrated … but especially in those areas where tenants have the right to pay up what they owe and stay in their units, it is really for the benefit of both landlord and tenant to make sure that rental assistance gets out the door. So, in states where things have not been up and running or where there have been processing delays, it makes sense to have more time.”

The Treasury Department is currently providing funding to 407 local rental assistance programs across the country, according to the National Coalition Housing Coalition. It has issued guidance to help local programs cut “undue documentation burden” since extensive paperwork and red tape often prevent aid from reaching the most vulnerable.

The current moratorium, extended in late March, does not cancel or address back rent that is past due and only applies to renters who may be evicted because of failure-to-pay.

The moratorium has been repeatedly challenged in court by local governments and landlord associations, which have argued the CDC overstepped its authority and does not have a mechanism for enforcing the rule. Still, more than 20 state attorneys general urged the Supreme Court earlier this month to keep the moratorium in place while those cases make their way through the courts. Local property owners and a group of real estate agents in Alabama have said the halt will “prolong the severe financial burdens” shouldered by those whose livelihoods depend on the rent that has not come due.

There remains a patchwork of local and state laws, some of which do require landlords to make tenants aware of aid and resources that may be available to them before serving an eviction notice, but others limit how much assistance funding individual renters can receive. The current moratorium requires the tenant to affirmatively declare that they cannot pay rent, placing a burden on the renter that some argue landlords have exploited to get around the moratorium and continue with evictions.