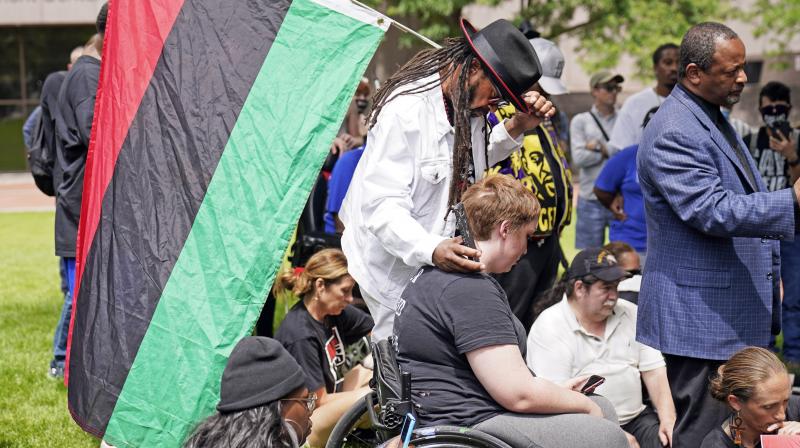 MINNEAPOLIS: Former policeman Derek Chauvin was sentenced to 22 and a half years in prison on Friday for the murder of African American George Floyd, the killing that sparked America's biggest demonstrations for racial justice in decades.

The white, 45-year-old Chauvin gave his "condolences" to the Floyd family in a Minneapolis court, without apologizing, before Judge Peter Cahill handed down a lesser sentence than the 30 years the prosecution had sought.

"This (jail term) is based on your abuse of a position of trust and authority and also the particular cruelty shown to George Floyd," Cahill told Chauvin, who listened impassively.

The decision was read out at the end of a tense hearing in which the court watched a recorded message by Floyd's seven-year-old daughter and heard from Chauvin's mother.

The Floyd family's lawyer called the sentencing a "historic" step towards racial reconciliation in the United States.

"(It) brings the Floyd family and our nation one step closer to healing by delivering closure and accountability," Ben Crump tweeted.

President Joe Biden said: "I don't know all the circumstances that were considered but it seems to me, under the guidelines, that seems to be appropriate."

After the sentence was announced, chanting marchers with megaphones and motorcycle escorts took over some of the city's busiest blocks during rush hour. No serious incidents were reported as they wound their way through stopped traffic.

The sentencing was long awaited in Minnesota, with hundreds of people gathering near the courthouse into the evening. Many said Chauvin should have gotten 30 or 40 years.

Chauvin, who has been behind bars since being convicted on three counts of murder and manslaughter two months ago, wore a light gray suit as he learnt his fate following a trial that captivated the world.

He spoke briefly, after declining to testify during his six-week trial.

"I do want to give my condolences to the Floyd family," Chauvin said after removing his face mask.

"At this time due to some additional legal matters at hand, I'm not able to give a full formal statement at this time."

"There's going to be some other information in the future that would be of interest and I hope things will give you some peace of mind," he added.

"I miss you and I love you," the girl said when asked in the recorded message what she said would say to her father today.

Chauvin and three colleagues arrested Floyd, 46, in May 2020 on suspicion of having passed a fake $20 bill in a store in Minneapolis, a northern city of around 420,000. They handcuffed him and pinned him to the ground in the street.

Chauvin then knelt on the back of Floyd's neck for nearly 10 minutes, indifferent to the dying man's groans and to the pleas of distraught passers-by.

The scene, filmed and uploaded by a young woman, quickly went viral. After weeks of home confinement due to the Covid-19 pandemic, hundreds of thousands of people poured onto streets across the country and overseas, to demand an end to racism and police brutality.

It took weeks for the mass demonstrations to taper off, but the debate around the pressing social issues remains vivid in the United States, where Biden has been slow to come up with the police reforms he promised during his campaign.

"Why? What were you thinking? What was going through your head when you had your knee on my brother's neck?" demanded Floyd, urging Chauvin to explain the reason for the murder.

Cahill said his sentence was "not based on emotion or sympathy," but the law, and in a 22-page sentencing memorandum identified aggravating circumstances that brought a heavier punishment.

They included that Chauvin's offense occurred in front of minors and that he "committed the crime as a group with the active participation of at least three other" officers.

Chauvin's trial was closely followed across the country.

His lawyer said Chauvin had followed police procedures in force at the time and that Floyd's death was due to health problems exacerbated by drug use.

The jurors took less than 10 hours to convict. Their decision was greeted with a huge sigh of relief across the country. Many had feared an acquittal would lead to worse unrest, while others worried that once again a white police officer would get away with what they saw as murder.

With good behavior, Chauvin could serve just two-thirds of any prison sentence, with the remaining third on supervised release.

The defense will appeal the verdict, Nelson has said, citing doubts over the impartiality of some jurors.

On the eve of sentencing, the judge denied the defense's request for a new trial.

Neither will the case end with Chauvin: his three former colleagues will face trial in March 2022 on charges of complicity in homicide.

In parallel, the four men also face federal charges of violating Floyd's constitutional rights. No date has yet been set for that trial.