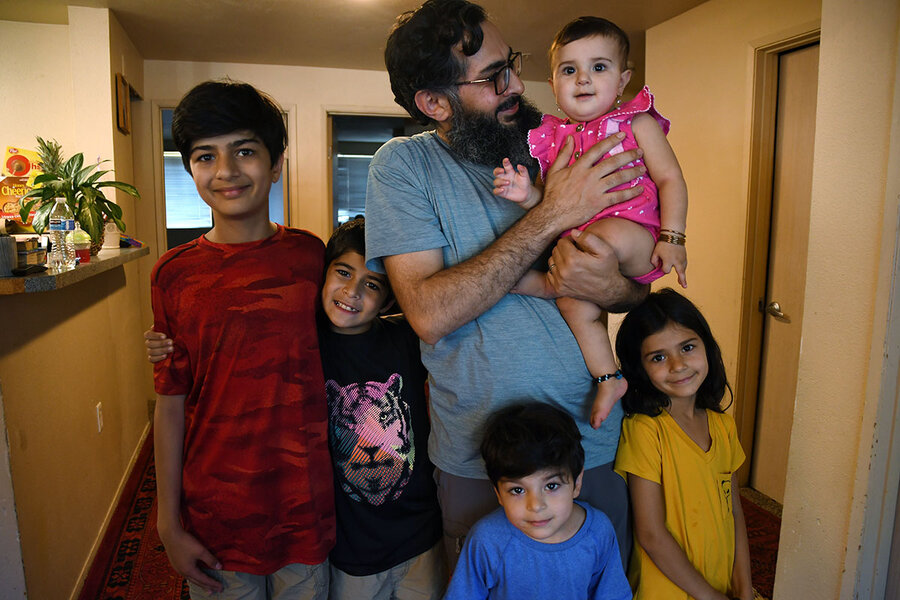 On sunny June weekends, when the days are long, Mohammad Salarzai enjoys taking his children to hike in the pine-covered Cascade Range, pick fresh cherries, or barbecue and swim at a lake near their home. Soon, he’s looking forward to treating them with a trip to the cinema, to watch “Peter Rabbit 2.”

An immigrant from Afghanistan and former longtime interpreter for the U.S. government, Mr. Salarzai has thrived since arriving in the Seattle area three years ago, despite the struggles of settling in a new country. Financially secure, he works in administration for a large contractor at Sea-Tac International Airport. His wife and six children are adjusting well and achieving fluency in English.

Above all, he knows they are safe. “We have a peaceful life. My wife is happy. We are happy,” he says, sitting cross-legged on the floor in his modest Kent apartment surrounded by his frolicking offspring, ages 15 years to 7 months.

Thousands of Afghans who worked with American troops have made it to safety in the U.S., under a special visa to protect them from reprisal. But they cannot be at peace, they say, so long as peers and loved ones are in danger back home.

But mentally and emotionally, Mr. Salarzai confides, he feels torn. “We are always, always worried about the family back home,” he says quietly, his voice falling. His concern has heightened with news of the U.S. military withdrawal from Afghanistan. “So, I don’t know,” he says. “We have mixed emotions here.”

The feeling of living in two worlds is strong and pervasive among Afghans who worked with the United States. About 21,000 have moved here along with some 53,000 dependents since 2008 under a Special Immigrant Visa (SIV) program created to protect them, according to State Department data provided by the International Refugee Assistance Project, a legal aid nonprofit organization in New York.

Their extended families back home face considerable peril as a consequence of their decisions to serve the U.S. government. Many have already seen relatives killed by Taliban insurgents, who have fought since the U.S.-led invasion in 2001 to overthrow the government in Kabul and return to power.

Mr. Salarzai lost his father, who was shot on a path outside his home in Kunar province as he returned from praying at the village mosque in 2018. “He got killed because of us working for the U.S. government, my brothers and me,” says Mr. Salarzai, who spent 14 years in the service of the U.S. military and State Department. “[The Taliban] couldn’t reach us, so they found him at home.”

They carry this burden of responsibility, made heavier by honor-based cultural traditions in Afghanistan that require men to defend their families at all costs. Many are doing everything they can to help friends and relatives get out, fearing the worst if the Taliban recapture the country. Two of Mr. Salarzai’s brothers, who worked for the U.S. State Department and military, are currently in Afghanistan waiting for visas. Facing constant threats, they dare not return to their home village in Kunar. One brother is in hiding, unable to work – an unsustainable situation. “He is always sending me messages, asking – ‘What’s going to happen?’” says Mr. Salarzai.

Indeed, virtually all interpreters fortunate enough to have made their way to safety in the U.S. are now being bombarded by friends and relatives with pleas to help them escape too, Afghans here say.

Ghulam Mohmand, a former interpreter for the U.S. Drug Enforcement Administration, settled in the Seattle area in 2015. Now a customer service representative at the Port of Seattle and father of five, he is anxious for the safety of his parents and siblings in Afghanistan – especially his brother, who worked for a U.S. private security contractor there.

“It’s getting worse there day by day,” says Mr. Mohmand, citing reports that Taliban insurgents are capturing more districts and conducting targeted killings and kidnappings in the city of Jalalabad, where his family lives.

“All they [the Taliban] know is to kill other people,” says Mr. Mohmand, dismissing recent Taliban pledges not to target Afghans who worked for the United States. “It’s a trap,” he says. “Why would they leave someone who was the eyes and ears of the enemy?”

The Biden administration has accelerated the processing of SIV applications for Afghans – up to 1,400 each month, compared with fewer than 300 in the last three months of 2020. On Thursday, The New York Times reported that officials plan to relocate thousands of Afghan workers awaiting visas, along with their family members, to third countries as their applications are processed, although where they would go was unclear.

But such efforts may not unfold fast enough, given an estimated backlog of 18,000 SIV applicants and the U.S. military withdrawal timeline by September. After American forces leave, Mr. Mohmand predicts the chances are high the Taliban will retake the country, making it extremely dangerous for anyone seeking a U.S. visa.

“Every day, when I receive a call from my mother, my brother, my father, my hand shakes – I am afraid I am going to hear the news that someone is killed,” he says softly. “My first question every time is, ‘Is everyone ok?’”

He pauses. “I feel guilty too, like my family might feel I am selfish for coming here with my wife and children. I struggle with that all the time,” he says.

Many of the Afghan SIV arrivals in the United States work doubly hard to support their families and communities financially both here and in Afghanistan.

Sayed Amin served for 12 years with the DEA and State Department in Afghanistan, ultimately becoming a DEA investigator. “I wanted to help the people of Afghanistan and the U.S. government,” he says. “I also believe that I personally served the people of the United States. I worked on some sensitive cases that were leading into the United States,” generating arrests, he says.

Now, Mr. Amin puts in long hours as a security supervisor at Starbucks to provide for his wife and seven children and send funds to his mother and siblings in Afghanistan. “There has never been a minute I am not concerned for them,” he says in a break from an overnight shift.

Seeking strength and self-sufficiency as a community, Mr. Amin and other Afghan SIV arrivals in the Seattle area pool their personal funds to help one another in emergencies. They also established the Afghan American Cultural Association, offering language classes and other events, says Mr. Amin, the association’s president.

Inamullah, who worked with U.S. contractors in Afghanistan for six years before moving to the Seattle area in 2015, must support not only his own family of six, but also his jobless brother and his family in Kabul.

Working as an account manager at a large security firm in Seattle, Mr. Inamullah, who goes by only one name, has spent years seeking the necessary documentation for a visa for his brother, Mohabat Qazikhil, who served with a de-mining company. Mr. Qazikhil, his wife, and two children are living in hiding in Kabul, unable to travel or attend family events in their home province for fear of a Taliban attack, Mr. Inamullah says.

Meanwhile, every day, Mr. Inamullah spends all his free time with his wife visiting their infant son, born prematurely two months ago, at Seattle Children’s Hospital, an hour from their home.

“We all know the overall situation in Afghanistan,” says Mr. Inamullah as he pauses outside the hospital before leaving to pick up his three other children from day care. “It’s something on our mind right now.”

(Editor’s note: Prior to rejoining the Monitor staff in 2019, Ann Scott Tyson served as a volunteer helping the Afghan SIV community resettle in Seattle.)