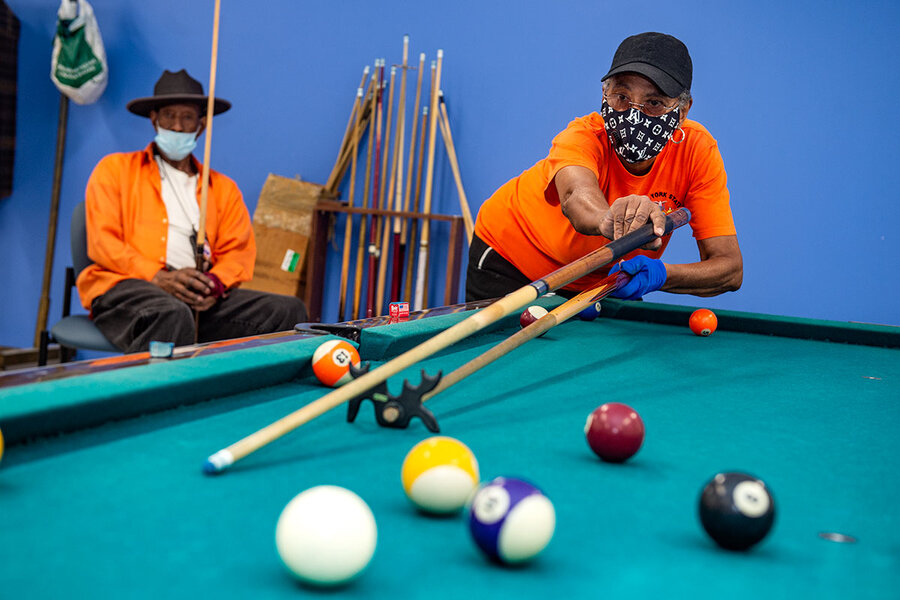 The New Yorker is back at the pool table, pacing the perimeter in white Reeboks to suss out her next shot.

“It feels great!” she says, pool stick gripped in a cobalt glove. “It came right back to me.”

The road to full recovery continues. But as the Big Apple speeds up reopening, the city swells with joy and relief.

For the past 15 months, the retired maintenance supervisor spent the pandemic alone. Holed up in her apartment, she filled her days with TV Westerns as she watched her world shrink.

“I had nowhere to go, nothing to do,” the octogenarian shakes her head. “I had a nervous breakdown, almost.”

Ms. Jones longed for what she calls her “second home” – senior centers. To her delight, the city allowed indoor activities at these venues to resume on June 14. Ever since a senior center in Harlem reopened last week, Ms. Jones has spent several hours a day there enjoying billiards and buddies.

“Just to get out is a blessing,” says Ms. Jones.

As the city speeds up reopening, New Yorkers like her share an air of elation and relief. There’s more healing ahead for the former pandemic epicenter, and no new normal can replace some 30,000 lives lost. But many are reveling in what feels like a hard-earned homecoming: New York, in many ways, is back.

For Daniel Krane, it means embracing a friend, Becky Voorwinde, for the first time in over a year.

“Part of what makes New York feel like home is being able to hug the people you love,” he says, as they sit together in Brooklyn’s Prospect Park, their mask-free smiles on full display.

Snarled traffic, bustling sidewalks, fans flocking to Yankee Stadium – signs abound of a metropolis buzzing back to life. Reviving a reputation as “the city that never sleeps,” midnight curfews for indoor dining ended last month and the subway resumed 24-hour service. Vaccinated people no longer need masks in most settings, the state said in May, though businesses can require them.

Fireworks glittered over New York Harbor on June 15 to mark a milestone: 70% of adults in the state had received their first dose of a COVID-19 vaccine. Gov. Andrew Cuomo, under federal investigation for his handling of nursing homes during the pandemic, dropped restrictions like social distancing and capacity limits for several industries that same day.

Political rivals, the governor and Mayor Bill de Blasio have at times issued conflicting COVID-19 guidance, but both Democrats have ramped up reopening in recent weeks. This month the mayor announced a Central Park mega-concert planned for August, part of a New York City Homecoming Week.

“It will celebrate the summer of New York City, the comeback, and it will emphatically make the point there is no stopping New York,” said Mr. de Blasio, who plans to fully reopen the city by July 1. The mayor has also announced a full return to in-person learning this fall. And lights will go up on Broadway in September.

The bursting of pandemic social “bubbles” is another hallmark of the new normal. Mr. Krane, a theater director, and Ms. Voorwinde, a nonprofit executive director, met up for bagels – and a hug – last week. In June alone, Ms. Voorwinde says her children received a bevy of birthday party invitations for belated celebrations.

“There’s just something really sweet about that, and how excited my kids have been to fill afternoons and weekends with birthday parties again,” she says, cradling her youngest, baby Alfred.

A robust but uneven rebound

When the first COVID-19 cases emerged and storefronts began to shutter, New Yorkers united. They rallied around Chinatown businesses; leaned out of windows banging pots to cheer on health care workers exiting overwhelmed hospitals; began mutual aid networks to feed hungry neighbors; and volunteered in their communities once they, themselves, had recovered from COVID-19.

Now, the average daily positivity rate is low (under 1% at the time of writing), yet some New Yorkers remain cautious.

Rosanna Santana, who is vaccinated, says she feels confident skipping a mask outside. But she still covers up indoors, even among friends. She’s careful from experience. Around Christmastime in Queens, there came a point when Ms. Santana, grappling with symptoms of COVID-19, thought she would die. Two family members did. “Some people, they think of [the coronavirus] as a joke,” she says. “Everybody in my house had COVID, but thank God we’re OK.”

Early Monday evening, Ms. Santana sits overlooking the East River as a breeze breaks the heat. A maskless passerby comments to her on the strength of the sun, even as it sets. She smiles at the brief exchange.

“The city has a life again, you know?”

In February 2020, the city unemployment rate was under 4%, mirroring the national rate before the pandemic spike. Months into recovery, however, New York City lags behind the country: The national jobless rate fell to 5.8% last month compared with the city rate of 10.9%.

The city economy is especially service-oriented, notes Dr. White, and jobs that relied on in-person transactions took hard hits under lockdown. Despite the newly relaxed restrictions, he says, “You can’t just flick on a light switch.” Businesses that temporarily closed may need to rehire and reestablish relationships with suppliers.

The leisure and hospitality sector has regained the most jobs so far, recovering 115,100 of the 298,700 it lost during the pandemic, according to a New York State Department of Labor analysis. The mayor announced in April a $30 million advertising campaign to help lure back tourism.

Zaina Elkordy has her finger on the pulse of Times Square, which was crowded on a recent weekday afternoon. She works at her family food cart, Broadway’s Fire Food.

At the start of the outbreak, “it was deserted out here,” she says on the street. “We stayed here just to maintain our spot.”

Their persistence paid off as business began to pick up this spring. But not everyone made it – a nearby restaurant closed.

“It’s just remarkable that we’re even smaller than this brick-and-mortar business, and we’re still managing to survive,” says Ms. Elkordy. She pauses to grill a kebab for a man painted head to toe in gold.

In the Bronx, pink and ivory gowns line the walls of Bridal by Rosas’s. After a tough year for business, Rosa Tejada knows her livelihood is linked to the reopening of event venues. The business owner says she closed for about three months when the pandemic hit.

But the past couple of weeks have brought hope: Ms. Tejada says she’s sold a handful of dresses for weddings, proms, and quinceañeras.

“I think everything’s going to be OK,” she says, standing beside a display case of tiaras.