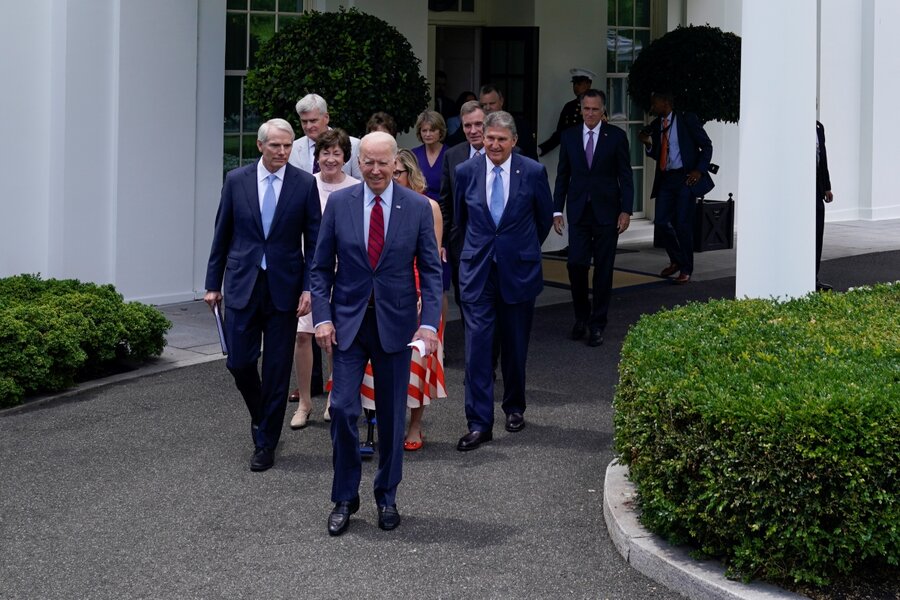 Day after day, as the partisan battle lines hardened on Capitol Hill over President Joe Biden’s domestic agenda, his calls for bipartisanship seemed increasingly out of step.

Senate Majority Leader Mitch McConnell said his goal was to focus “100%” on stopping Mr. Biden’s agenda. Progressive Democrats, meanwhile, pushed Mr. Biden to use the brute force power of a majority, even the most slender one, to pass legislation without any GOP support.

But on Thursday, it was Mr. Biden, the Washington careerist schooled in the ways of compromise, standing in front of the White House, flanked by Democrats and Republicans alike, claiming a bipartisan deal had been struck on a $1.2 trillion infrastructure package.

And, like a dream sequence from another era, senators from both parties dutifully spoke about the virtues of not getting all you want and trying to reach something that has been highly elusive in Washington for more than a decade: consensus.

“It’s been a very long time since the last time our country was able to strike a major bipartisan deal on American infrastructure, which is so badly needed, I might add,” Mr. Biden said. “We’ve devoted far too much energy to competing with one another and not nearly enough energy in competing with the rest of the world to win the 21st century.”

Mr. Biden had campaigned on his ability to get deals done across the aisle, and Thursday’s announcement was an undeniable victory, one that may give nervous moderate Democrats cover as they likely will be asked to support the rest of the president’s agenda on a party-line basis.

But the accomplishment itself was fragile, one that faces opposition on the liberal flank of his own party and one that is far smaller than Mr. Biden first proposed. And the president’s promise that he would sign the bipartisan deal only if a far larger, $4 trillion reconciliation bill – which would contain his other priorities – also came to his desk made very real the possibility that Thursday’s celebration of bipartisanship may end up being fleeting.

A new “era of good feeling” it is not.

Still, Mr. Biden proved that all his stated intentions about working with Republicans were not simply to burnish his image as a moderate with swing voters.

From the moment he announced his 2020 campaign, his third try at the White House, he insisted that he could restore a sense of bipartisan comity to Washington. He seemed oblivious to hyperpartisanship that had gripped the capital, one building since the 1990s and dramatically accelerated under the divisive presidency of Donald Trump.

The quest to successfully reach across the aisle remained quixotic after he took office.

Although the nation was in the grips of the pandemic, not a single Republican lawmaker on Capitol Hill voted for the president’s $1.9 trillion COVID-19 relief bill even though it enjoyed widespread support among GOP voters. Goaded by Mr. Trump, who had incited an insurrection at the Capitol to prevent the certification of Mr. Biden’s very election, an increasing number of Republicans propagated the lie that the 2020 campaign was fraudulent and doubted the president’s legitimacy.

And Mr. McConnell, whom Mr. Biden frequently referred to as a friend with whom he could do business, had built a solid wall of defiance among Republicans bent on thwarting the president’s agenda.

The Republicans’ vocal intransigence only fueled Democrats’ worries about Mr. Biden’s approach, which many felt was a pointless waste of time. They asked why a president who promised to act with such urgency and who outlined a far-reaching liberal agenda to rival those authored by Franklin D. Roosevelt and Lyndon Johnson, would fritter away time courting obstructionist Republicans.

Historically, however, bipartisanship is not unusual for infrastructure packages – the last big infrastructure bill in 2015, costing over $300 billion, passed Congress overwhelmingly.

But the Democrats’ current margins are small: Only a handful of seats in the House while the Senate is 50-50, with ties broken by Vice President Kamala Harris. And with the clock ticking toward the midterms, many on the party’s left flank urged Mr. Biden to ditch the effort at bipartisanship and go it alone.

But Mr. Biden had bet his political capital that he could work with Republicans and showcase that “that American democracy can deliver” and be a counterexample to rising global autocracies, and namely China.

“This agreement signals to the world that we can function, deliver, and do significant things,” the president said. “These investments represent the kind of national effort that throughout our history has literally – not figuratively – literally transformed America and propelled us into the future.”

Mr. Biden and his aides also believed that they needed a bipartisan deal on infrastructure to create a permission structure for more moderate Democrats – including Kyrsten Sinema of Arizona and Joe Manchin of West Virginia – to then be willing to go for a party-line vote for the rest of the president’s agenda.

And some liberals, meanwhile, like Sen. Bernie Sanders of Vermont, have been floating the theory that giving the moderates in his party a win on this will help others on the left keep the pressure on to pass the bigger bill.

But there were limits to what was achieved.

Congress had to do an annual infrastructure bill by the end of September, which required 10 Republican votes, so the bill agreed to on Thursday, in essence, was simply expanding and accelerating a package that was already on the horizon.

Moreover, the new bill was for far less than the approximately $2 trillion he originally sought, which continued to raise some ire on the left. And while it focused on hard infrastructure – things like highways and subways and broadband – it left unaddressed so much of what Mr. Biden had proposed earlier this year, including sweeping reforms to housing, child care, and efforts to combat climate change.

Those White House priorities, the administration said, would now be tackled separately in a congressional budget process known as reconciliation, which requires only a simple majority to pass. And Mr. Biden made clear that the two items would be done “in tandem” and that he would not sign the bipartisan deal without the other, bigger piece.

Both Mr. Manchin and Ms. Sinema signaled Thursday that they supported the approach, but some doubts remained about whether all the Democrats would stay in line to pass the massive piece of legislation.

But Mr. McConnell said that Mr. Biden’s insistence on pairing the two bills – one of which would almost surely not receive GOP support – undermined his bipartisan outreach and “almost makes your head spin.”

“An expression of bipartisanship, and then an ultimatum on behalf of your left-wing base,” the Republican leader proclaimed.

But Mr. Biden was only reveling Thursday in achieving GOP support for the deal, an agreement that he said evoked his political North Star: the bipartisan spirit of yore. As if to symbolize his effort, the former Delaware senator even put his hand on the shoulder of a stoic-looking Republican Sen. Rob Portman of Ohio as the president made a surprise appearance with a bipartisan group of senators to announce the basis for an accord outside the White House.

“This reminds me of the days when we used to get an awful lot done up in the United States Congress,” Mr. Biden said.