Only the lazy did not touch on the topic of the Peltier element. YouTube is full of videos about how you can use the element to heat or cool something, and how you can charge your phone, or even make a miniature thermal power plant.
I decided to try to put together a fishing charger to charge the phone, etc., using solar, thermal energy. Of course, while fishing, the sun may not come out of the cloud, but while the hot sunny weather is outside the window, I will try this project.
A module installed on a radiator submerged in water, especially if it is a stream or shallow water near the coast, will have stable cooling on one side. It remains to somehow warm up the opposite side
As you can see in the video, some authors heat the module with warm water
Other dry fuels.
And the stronger the heating, the more efficiently the voltage rises.
And since I want to use the solar heat, I you need to collect it somehow. I saw how the guys made solar collectors that work great under the sun even in winter.
And I also remembered my golden childhood, when during the holidays I came to my grandfather's apiary and there, there was a solar wax melter, which, under the sun's rays, heated up and melted wax raw materials. Under two glasses, the temperature rose, somewhere up to 90-100 ° C. I remember lifting the glass and stuck my finger into the melted wax in the tray, it burned, it was up to a blister.

So the idea came to repeat the wax melter but in miniature. It didn't take long to look for a strong plywood box with a relatively thin bottom. Wood is an excellent heat insulator. After removing the inner lintels, I cleaned the glue layer with a chisel. I also removed the old, swollen varnish with the help of grinding. 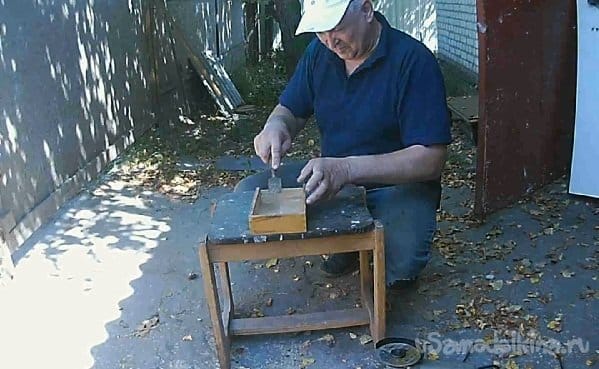 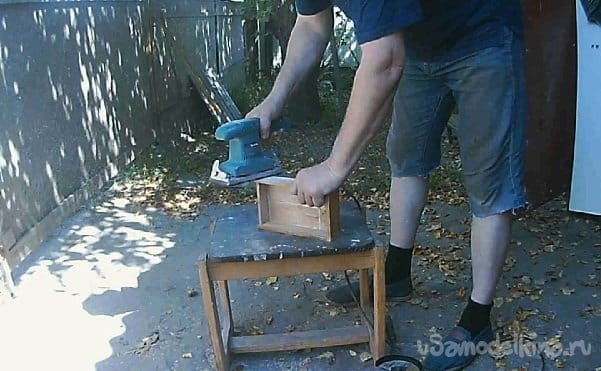 I took the metal for the bottom of the box from the Soviet iron bookshelf. It has a dark color that will attract heat well.
I drew the inner size, took the angle grinder and cut off all unnecessary ones
Attached an element to the outer side of the bottom, outlined modules for future holes with a pencil. 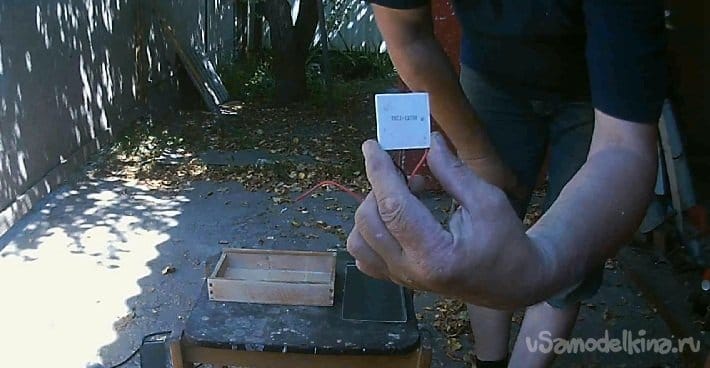 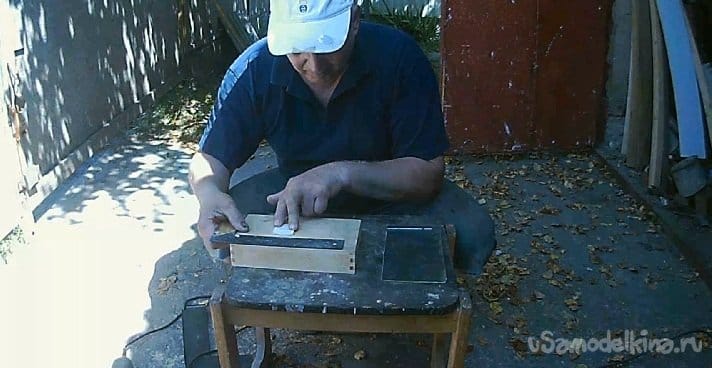 I drilled holes for a nail file and cut out squares for Peltier elements with a jigsaw. Two elements were chosen so as not to use a step-up module, but to directly connect the load.
Aluminum radiator, common for two modules. Since the bottom of the box is thinner than the elements, a radiator screwed to it tightly presses the elements to the metal plate inside. 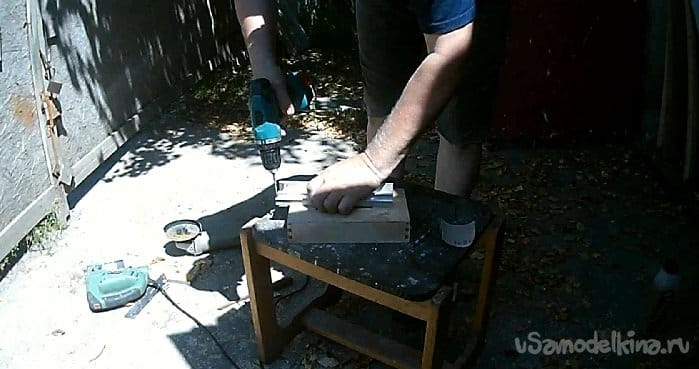 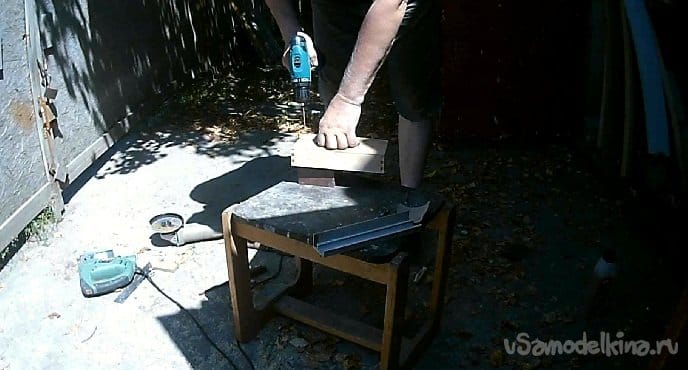 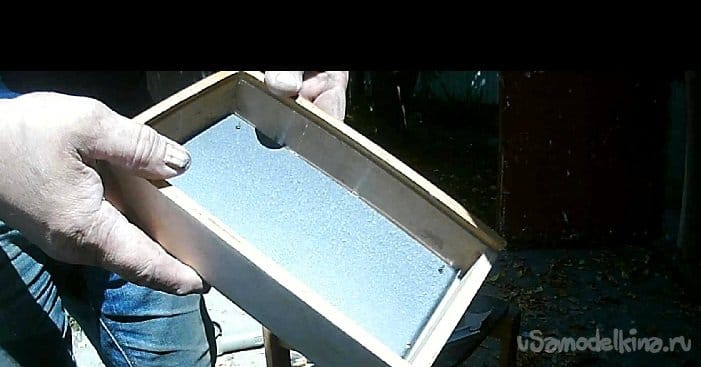 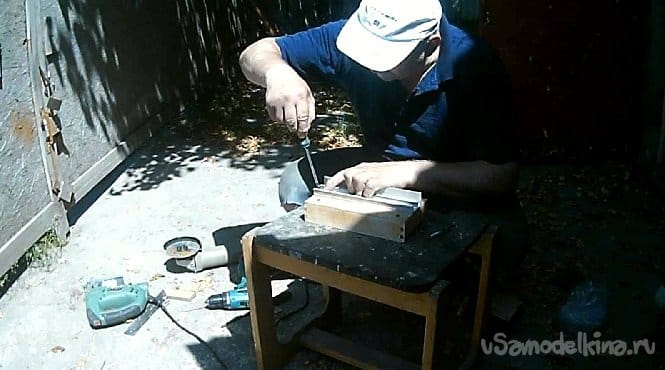 Having finished with the heat exchanger, I proceed to the glazing. First glass, inner. It is inserted into the groove that was in the box. The glass went tight, after pressing in, the excess glass was cut off with a glass cutter. 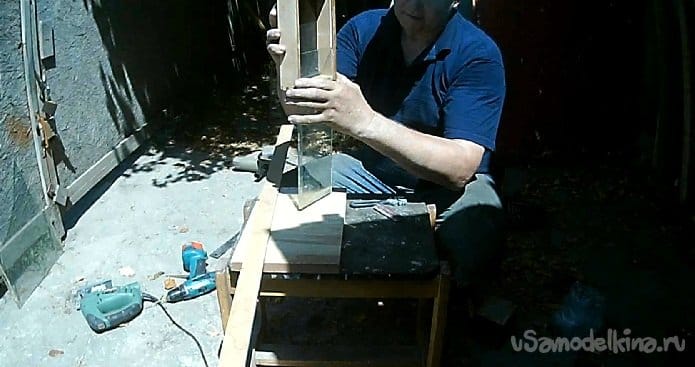 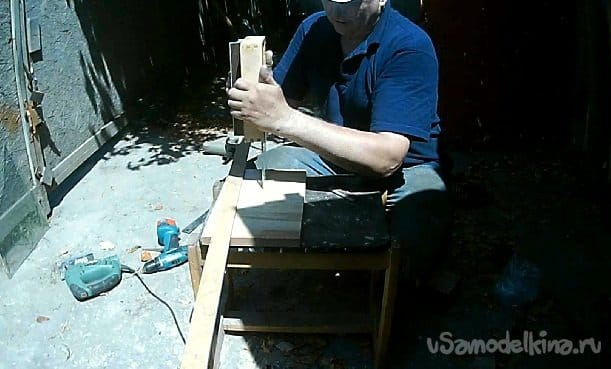 I cut out the second glass according to the outer size of the box. An air gap of 6 mm thick was formed between the glasses. 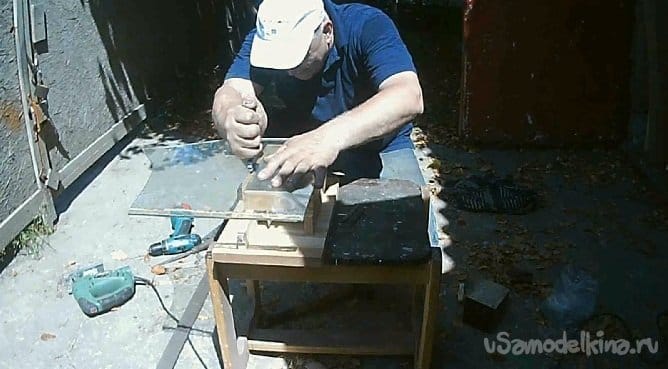 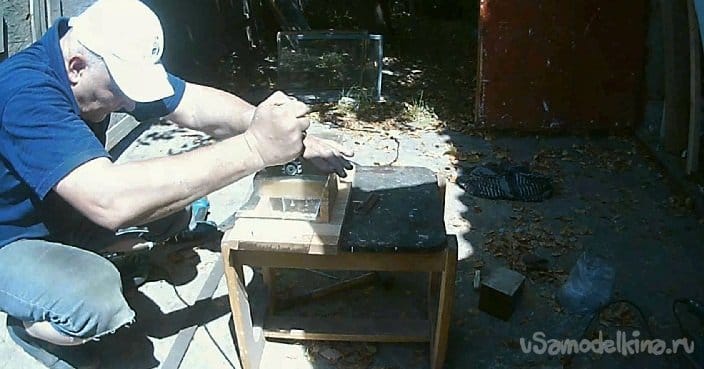 The assembly began by applying thermal paste to a metal plate. The main thing is without fanaticism. After installing the modules into the holes, I applied thermal paste again.
He brought the wires through the holes drilled in the radiator and pulled the radiator to the bottom with screws. 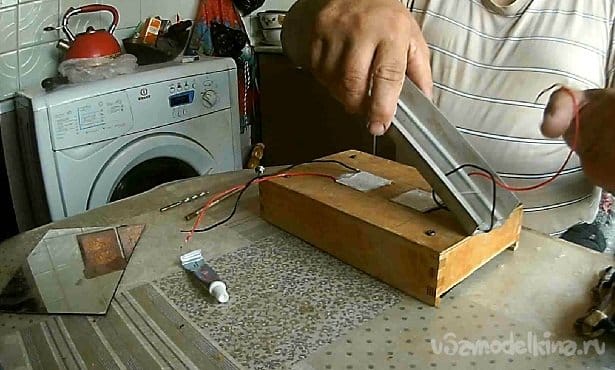 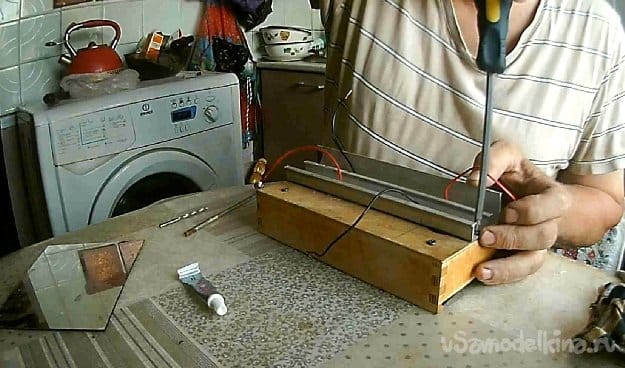 To install the glasses I used a neutral sealant, on my own, without advertising, a very good sealant, tested over the years, does not have an acid smell.
First passed, all the joints of the inner glass. After laying, I push the applied sealant, remove the excess with a spatula. 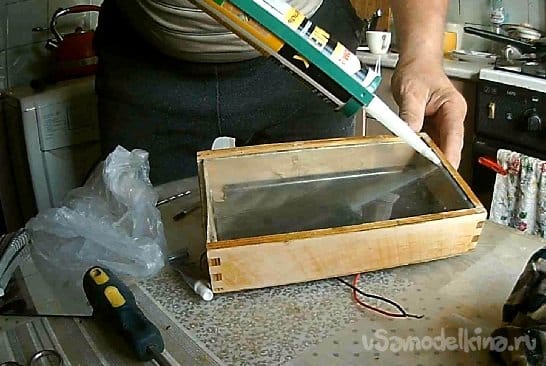 The second glass is installed with a heap after the applied sealant. The excess was also removed with a spatula. The glued product was carefully laid for a day.
The project is finished, the compact size pleased me. The time has come for testing. After waiting for sunny, cloudless weather, I went to the summer cottage.
When shooting, I decided to zoom in on the object so that everything was clearly visible how the voltage rises depending on the temperature increase inside the box.
To cool the radiator, I took a sealed wooden box into which I poured cold water from a well. 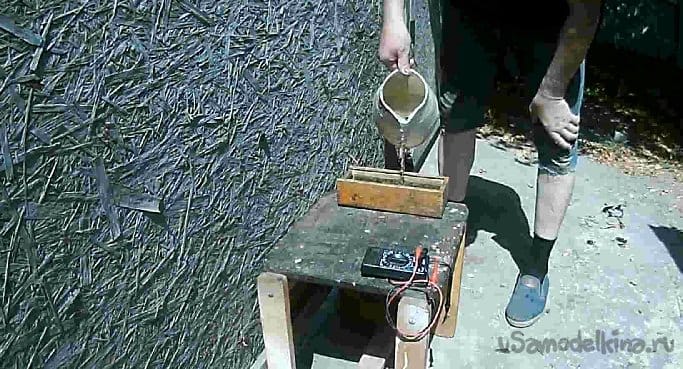 Then be careful not to splash, immersed the radiator of the assembled structure 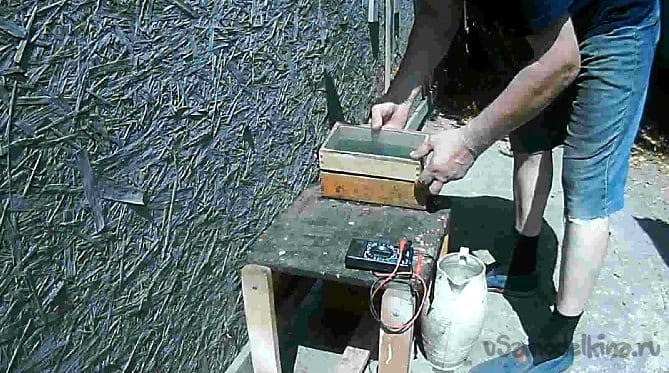 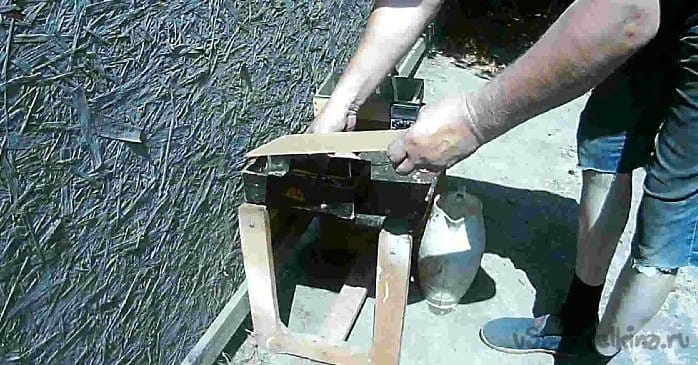 When connecting a voltmeter, it showed almost 1.5V. Apparently while he was doing the preparations, the sun heated the inner plate and the generation started. 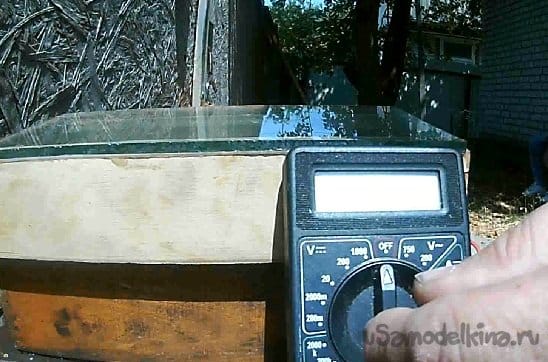 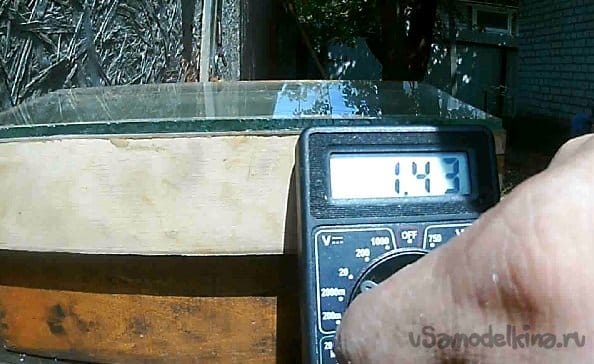 Not even five minutes have passed , the voltage rose to 5.5V, and stopped. This is quite enough to charge the phone, etc. Moreover, the boost module is not needed 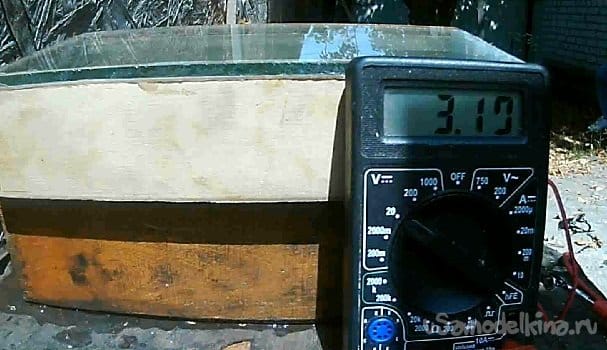 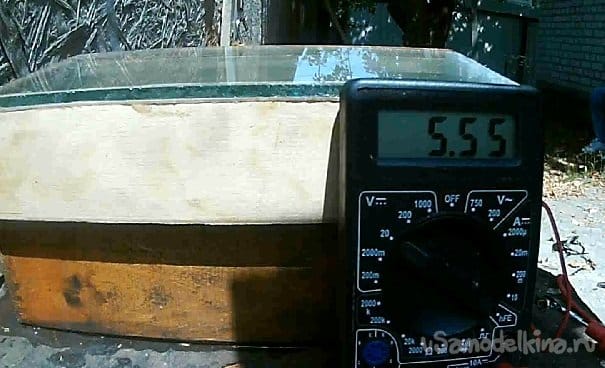 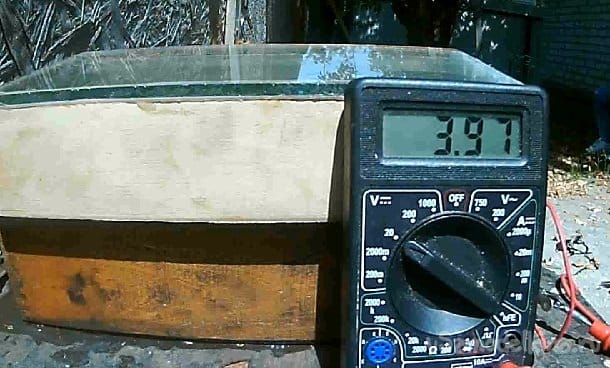 To understand why happened, I'm starting to take everything apart.

Everything is clear, modules through the radiator heated the water and this reduced the voltage.

I took water from a well, which is about 10 ° C. The container under two glasses warmed up even to 80 (again, approximately). The temperature difference, on the sides of the elements, is about 70 ° C. When the elements are connected in series, 5V is obtained. If the assembly is placed in running water, in shallow water or in a stream, then in the presence of the sun, the generation of electricity will be stable.
Of course, a solar folding panel is much better for a hike and more powerful than this homemade, but the module has a slight advantage, Heat can be created in the dark, which will also generate electricity and in the next project it will be possible to smash your head over it.
Source:

Signaling device when moving away from the object