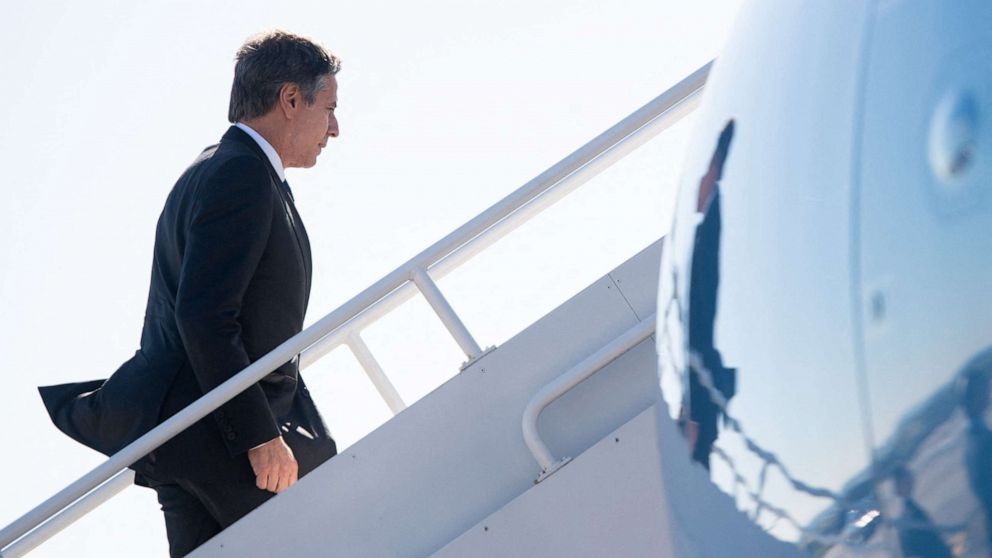 Fresh from accompanying President Joe Biden on his first overseas trip, Secretary of State Antony Blinken returns to Europe for his first visits to Germany, France, Italy and the Vatican, in what a senior U.S. diplomat called another key trip focused on “rebuilding our relationships with allies.”

But even after Biden rallied U.S. allies at the Group of Seven and NATO, there are still several speed bumps that may rock Blinken’s latest trip, especially over how to approach China and Russia.

During the week-long trip, Blinken will meet with German Chancellor Angela Merkel, French President Emmanuel Macron and Italian Prime Minister Mario Draghi, along with his foreign minister counterparts. Serving only the second Catholic American president, Blinken will also visit the Vatican to meet “senior Holy See officials,” according to the State Department, which could include Pope Francis.

He’ll also attend critical summits to back Libya’s new interim government ahead of elections in December; to convene the coalition fighting the Islamic State group in Syria, Iraq and increasingly elsewhere around the globe; and to organize the world’s largest economies, known as the Group of 20, especially to combat COVID-19 and boost the global economic recovery.

It’s all part of Biden’s effort to restore U.S. leadership in multilateral forums that his predecessor Donald Trump largely dismissed in his “America First” approach.

For U.S. allies, Biden’s meetings last week with Russian President Vladimir Putin, where Blinken joined him for the initial two-on-two session, will be of particular importance.

Biden has said he hopes to create a united front against Moscow to encourage better behavior on the world stage. It’s an approach that critics in the U.S. have dismissed as naïve, amid Russia’s ongoing occupations and conflicts in Ukraine and Georgia, two European countries — but one where allies like Germany may be less than cooperative.

The top U.S. diplomat will similarly encounter diverging views on China despite the united front Biden projected from his meetings at the G-7 summit, NATO and with European leaders.

“This trip is a continuation of the priority that President Biden has made of rebuilding our relationships with allies,” acting Assistant Secretary of State for Europe Philip Reeker said Monday. Those ties, he added, are critical for the administration’s “foreign policy priorities, including economic recovery as we emerge from the COVID pandemic and pushing back on the People’s Republic of China and authoritarianism generally around the world.”

After a summit of NATO allies’ leaders, the military alliance declared China a global security challenge, agreeing in their joint statement, “China’s stated ambitions and assertive behavior present systemic challenges to the rules-based international order and to areas relevant to alliance security.”

But within hours, French President Emmanuel Macron downplayed the tone, telling reporters, “It is very important not to disperse ourselves and not to bias the relationship with China.”

At the G-7, the leaders of the U.S., United Kingdom, Canada, Japan, France, Germany and Italy agreed to “a new infrastructure initiative, Build Back Better World — B3W — that will be a high-standards, transparent, climate-friendly alternative to the Belt Road Initiative,” according to Biden’s national security adviser Jake Sullivan, that is a cornerstone of Chinese leader Xi Jinping’s foreign policy.

But there was marked tension among the G-7 allies about China, according to a senior U.S. administration official, over “how hard to push and to call out some of the actions that China is taking.”

While Blinken papered over that in an interview with ABC News, those divisions were on display just before his trip. On Monday, Italy’s Foreign Minister Luigi Di Maio spoke to China’s Foreign Minister Wang Yi and reportedly recommitted to working with Beijing on the “Belt and Road” initiative.

“Italy hopes to work with China to promote the ‘Belt and Road’ construction (and) strengthen cooperation in energy, industry, and third-party markets,” Di Maio told Wang, according to Xinhua, a Chinese state-run media outlet. The Italian readout said only, “The agenda focused on bilateral relations between Italy and China, respect for human rights and cooperation within the G-20.”

In an interview this week, Armin Laschet, the front-runner to replace Angela Merkel as German chancellor, also voiced skepticism about the strong U.S. push to counter China, which started under the Trump administration but has found continuity under Biden.

“Do we need a new adversary?” the center-right party leader told the Financial Times. “Yes, China is a competitor and a systemic rival. It has a different model of society. But it’s also a partner, particularly in things like fighting climate change.”

Blinken may have the chance to meet Wang himself on the sidelines of the G-20 foreign ministerial next week, which would be their first meeting since a very public spat during a high-stakes meeting in Anchorage, Alaska, in March. Reeker declined to comment on who Blinken would meet during the summit.

But one relationship the new administration hopes to improve is with Germany, where Blinken will make his first stop. To that end, the administration decided to waive sanctions on a German firm and its German CEO constructing the Russian pipeline known as Nord Stream 2.

While the U.S. has called it a “Russian geopolitical project that threatens Europe’s energy security,” it pulled its punches on the company constructing it — unleashing a wave of criticism from Republican and Democratic lawmakers.

Biden has said the pipeline is essentially complete, and Blinken has argued sanctioning Germans would only exacerbate the relationship with Berlin, already tender after Trump’s four years of taunts and tumult, without stopping construction.

“Rather than risk damaging relations with European allies through further sanctions, we’re going to use this space provided by these waivers to engage Germany diplomatically and take steps to reduce the risks that Nord Stream 2 poses to Ukraine and to European energy security more broadly,” Reeker said Monday.

He declined to provide any details on what Germany can or is willing to do to that end.