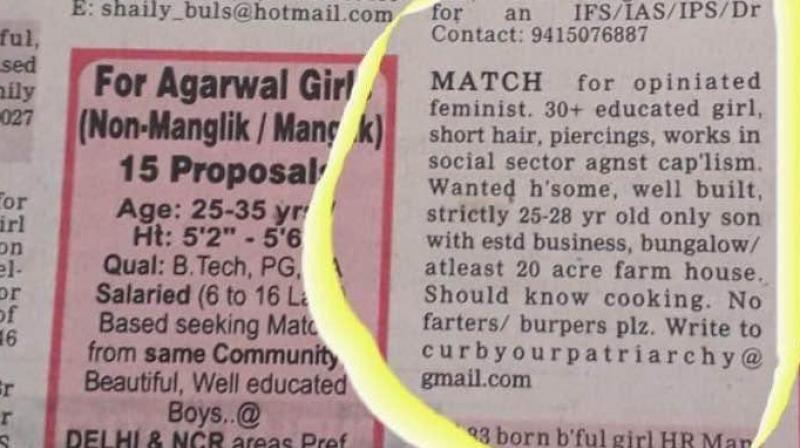 New Delhi: “Matrimonial ad by a feminist” is an oxymoron. These advertisements are often sexist and casteist, putting emphasis on attributes like caste, class, height, and the colour of one’s skin, and using salary and other wealth related attributes to appeal to potential matrimonial partners.

However, a matrimonial advertisement “by a feminist” went viral after comedian Aditi Mittal tweeted about it, bringing the advertisement into the limelight.

Did someone put out a matrimonial ad for me pic.twitter.com/DKsbk0iijT

The advertisement, obviously fake, was a prank to emphasise the sexist and misogynistic ideology behind matrimonial advertisements. The owners of the email [email protected] under the pseudonyms Sakshi, her brother Srijan and her best friend Damyanti- told BBC that it was a prank played on Sakshi for her 30th birthday.

"Turning 30 is a milestone, especially because of all the conversation in our society around marriage. As you turn 30, your family and society start putting pressure on you to get married and settle down," Srijan said.

However, once the advertisement went viral, it reopened the debate of the sexism and misogyny of matrimonial ads. Though she did receive many positive emails, Sakshi claimed that there were a plethora of hate emails sent her way as the ad hurt a lot of fragile egos, ranging from feminism-bashers to trolls sending death threats over a prank.

"You can't say such things out loud. Men ask for tall, slim beautiful brides all the time, they brag about their wealth, but when the tables are turned, they can't stomach it. How could a woman set such criteria?" She added, "[The ad] was a satirical statement on this narrative and I assume that the people getting triggered are the same as those who put out these kinds of 'slim, fair, beautiful bride wanted' type of ads in the first place".

And for those upset by an obvious prank, she asks: "Do you send such triggered emails to all the sexist, casteist 'bride wanted' adverts that appear in the papers everyday? If not, then you need to curb your patriarchy".