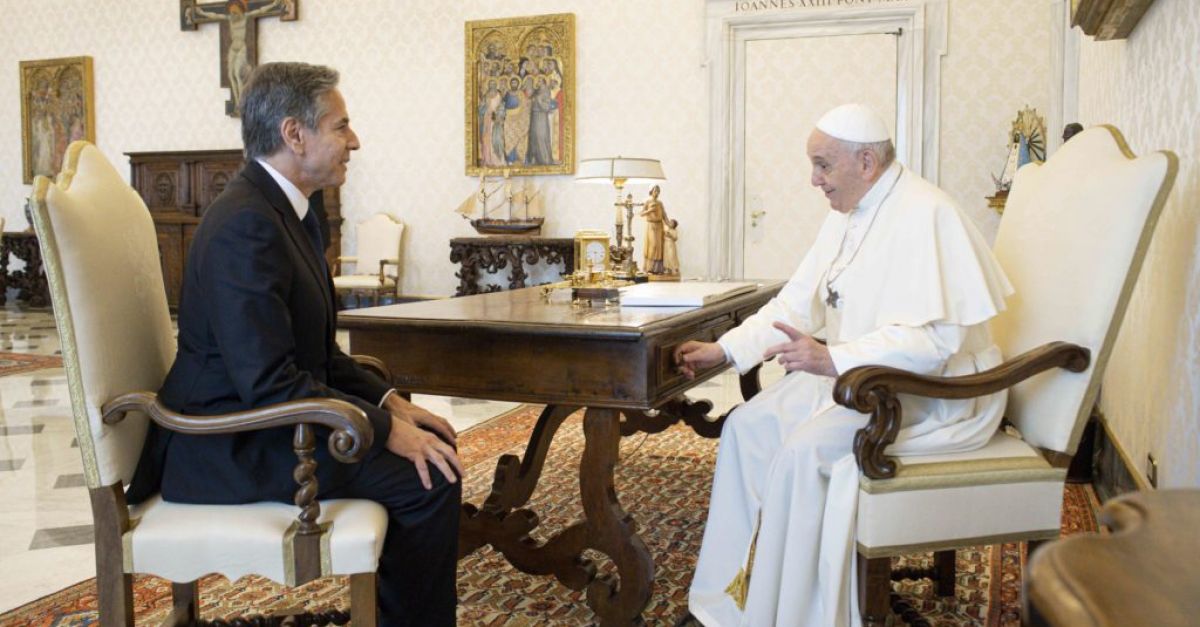 Pope Francis voiced affection for the American people as he met at length with the US secretary of state, the Vatican said, without indicating whether the two discussed the sharp divide among US bishops over giving communion to politicians supporting abortion rights like President Joe Biden.

The pontiff accorded Secretary of State Antony Blinken a substantial chunk of time, especially in view of a government official who is not a national leader.

The audience in the Apostolic Palace “played out in a cordial atmosphere”, a Vatican spokesman, Matteo Bruni, said.

“It lasted about 40 minutes, and it was for the pope, the occasion to recall his 2015 visit and to express his affection and his attention to the people of the United States of America.”

Mr Bruni was referring to the pontiff’s US pilgrimage, which included a meeting at the White House with then-president Barack Obama.

Since then the US church hierarchy has been increasingly more polarised about US politics and politicians.

Conservative US bishops have been clamouring for clear directives against giving communion to US political figures who are Catholics and support women’s right to abortion.

This campaign has put the spotlight on Mr Biden, a Catholic who has said while he personally opposes abortion he supports abortion rights.

Francis has not weighed in publicly on the latest debate within the heavily polarised US Conference of Bishops, although in 2015 he issued a letter expressing compassion to women over the agonising choice they face over abortion.

Earlier at the Vatican, Mr Blinken received VIP treatment, getting a private tour of the Sistine Chapel before he sat down for closed-door talks with Francis.

Mr Blinken was the first high-level official of Mr Biden’s administration to have a private audience with the pontiff.

Last year, when Mr Blinken’s predecessor, Mike Pompeo, came to the Vatican, he was not granted private time with Francis.

At the time, Vatican officials said that was because the Holy See didn’t want to give any impression of favouritism only weeks before the US presidential election that brought Mr Biden to power.

But China was a thorny issue between both sides.

Mr Pompeo had blasted the Vatican for what he said was a lessening of its moral authority by signing an accord with Beijing over the nominations of Chinese bishops.

Mr Pompeo called on the Holy See to take a tougher stand against Chinese restrictions on religious freedom.

Mr Biden, for his part, has criticised China for forced labour practices.

Francis has championed human rights in many countries to draw attention to peoples’ suffering.

But as the bishops’ agreement indicates, Francis is also intent on improving conditions for the Catholic church in China.

But some in his own church have expressed dismay that Francis has not taken a harder stance on Chinese authorities’ longtime discrimination against Catholics loyal to the pontiff.

Visitors to the Sistine Chapel, with its ceiling frescoes by Michelangelo and a 30-by-60-foot wall painting, Last Judgment, by the Renaissance master almost always emerge wowed.

Mr Blinken appeared to be no exception after his short, guided tour.

Mr Blinken nodded and gestured around the cavernous space.

Mr Blinken is visiting Rome before flying to southern Italy for Tuesday’s Group of 20 meeting of foreign ministers, which is focused on improving collaboration among nations on climate change, health issues and development.