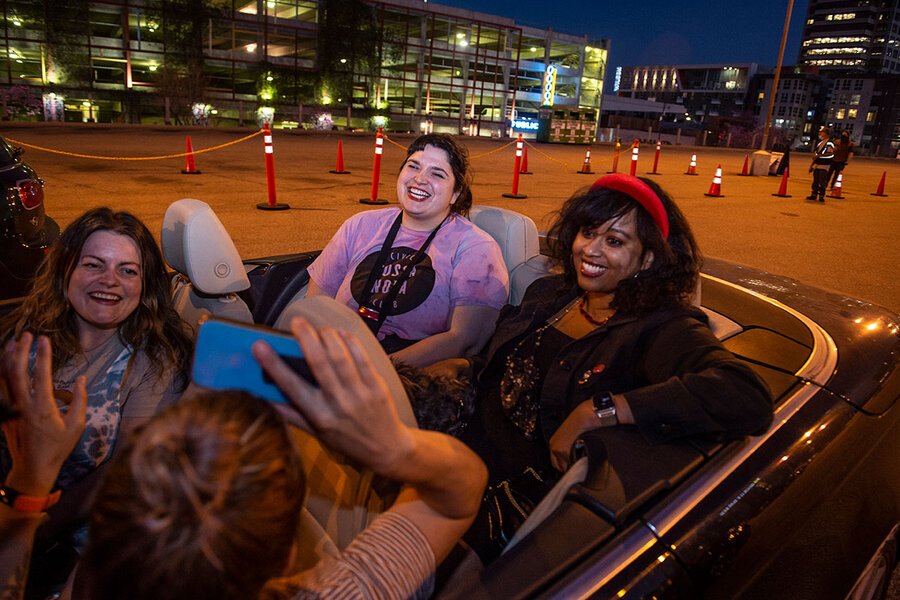 The Glendale parking lot is filling up quickly as Xavier Sanchez carefully directs another car into just the right spot.

It’s not the weekend, or even a new blockbuster release, but the cars keep lining up to see the pop-up double feature at the Electric Dusk Drive-In. Even as indoor theaters slowly begin to reopen, Los Angeles moviegoers still seem to be flocking to the reemerging drive-in movie scene. Is it just nostalgia or a trend that’s here to stay?

With its year-round temperate weather and deeply embedded car culture, a city like Los Angeles seems to be the perfect place for drive-in theaters. Before the pandemic, a slow and steady decline had settled in, leaving only a handful of viable theaters scattered around the area. Mission Tiki Drive-In Theatre in Montclair, which opened in 1956, had seen a decline in ticket sales and the site was sold.

As moviegoers flocked to drive-in theaters in search of a pandemic distraction, they found something more – nostalgia and a reminder of just how good it feels to do something together, even when you’re in separate cars.

The pandemic ended up being a bittersweet reprieve for Mission Tiki. As the developer delayed breaking ground, the drive-in saw an increase in ticket sales as moviegoers rediscovered the retro entertainment. The temporary reopening also gave local fans more time to say goodbye.

“We were locked in quarantine in 2020. I sat there and scratched my head. It’s like, what a great opportunity to make lemonade out of lemons,” says P. Ben Chou, founder of WE Drive-Ins, who used his new company to address the need for pandemic-safe entertainment in his community.

Mr. Chou decided that he could help not only cooped-up movie fans (by “restoring the hearts”) but also workers hit hardest by the pandemic (in the restaurant and theater sectors). Before going on hiatus recently, his pop-ups included food and films, so that he was “putting both sectors, to a small degree, back to work,” Mr. Chou says.

Despite the struggles of the older, established drive-ins, pop-up models that repurpose underused spaces seem to be thriving for now, even as indoor entertainment becomes more widely available.