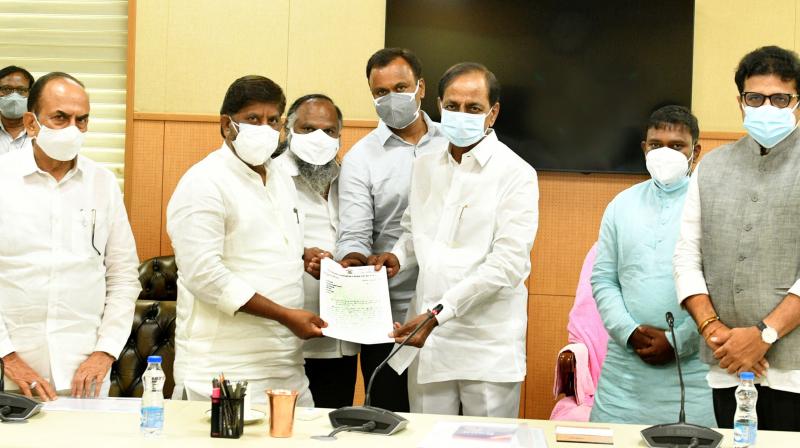 Hyderabad: Quite unusually, the gates of Pragathi Bhavan, the official residence-cum-camp office of Chief Minister K. Chandrashekar Rao were opened for Opposition leaders for the first time, on Friday.

Party MLAs led by Congress Legislature Party leader Mallu Bhatti Vikramarka had sought an appointment from the CM to seek a probe into the recent lock-up death of a Dalit woman, Mariamma. When the CMO confirmed the appointment, this came as a surprise to not only Congress leaders but other political leaders too.

This fuelled speculation of a noticeable change in the CM’s style of functioning after Etala Rajendar's removal from the ministry. Of late, the CM is busy touring districts and meeting people, contrary to his image of being confined to Pragathi Bhavan or his farmhouse for most of the time in the past seven years.

Opposition parties have been complaining of not getting an appointment to meet the CM at least once in the past seven years. This was so except for the Owaisi brothers of the AIMIM, who could meet the CM at Pragathi Bhavan repeatedly.

But, on Sunday, in another outreach, the CM decided to hold an all-party meet on June 27 to discuss the modalities for implementation of the new CM Dalit Empowerment Scheme. Floor leaders of all parties in the Assembly and Dalit leaders have been called for the meeting at Pragathi Bhavan. This, notably, is the first all-party meeting being conducted by Chandrashekar after 2014, and the first time Pragathi Bhavan is hosting such a meeting.

Earlier, after receiving the representation from Congress MLAs, the CM advised DGP M. Mahendar Reddy to inquire into the lock up death of Mariamma and take stringent action against the police personnel responsible for this. If need be, remove them from service, the CM has said.

He said the alleged lock-up death of Mariamma from Chintakaniki in Madhira Assembly segment under Khammam district was very painful to him, and that the government would never support such actions.

The CM said the government would support the son and daughters of Mariamma. He asked Chief Secretary Somesh Kumar to ensure that Mariamma’s son Uday Kiran is given a government job, a house and Rs 15 lakh ex gratia. Mariamma’s two daughters would be given Rs 10 lakh each. The CM asked the DGP to visit Chintakaniki to collect the details about the lock-up death and meet the victim’s family.

The Chief Minister expressed his anguish over the “cruel behaviour” of the police. He suggested that local minister Puvvada Ajay Kumar, MP Nama Nageshwara Rao and the district collector take Mallu Bhatti along with them on June 28 and meet the victim’s family members and console them.

Bhatti said the Chief Minister has assured them he would fulfill all the promises given to Mariamma's family in three days’ time.

Speaking to the media after his meeting with the CM, Bhatti said he sought stringent action against the errant police officials. The police have badly beaten up even Mariamma's son Uday Kiran and his friend Shankar. “Attacks on Dalits have increased in Telangana and there is no security for the poor and Dalits,” he said.

He said DGP Mahendar Reddy had promised to visit Mariamma's village Komatlagudem on Saturday and inquire into the incident.