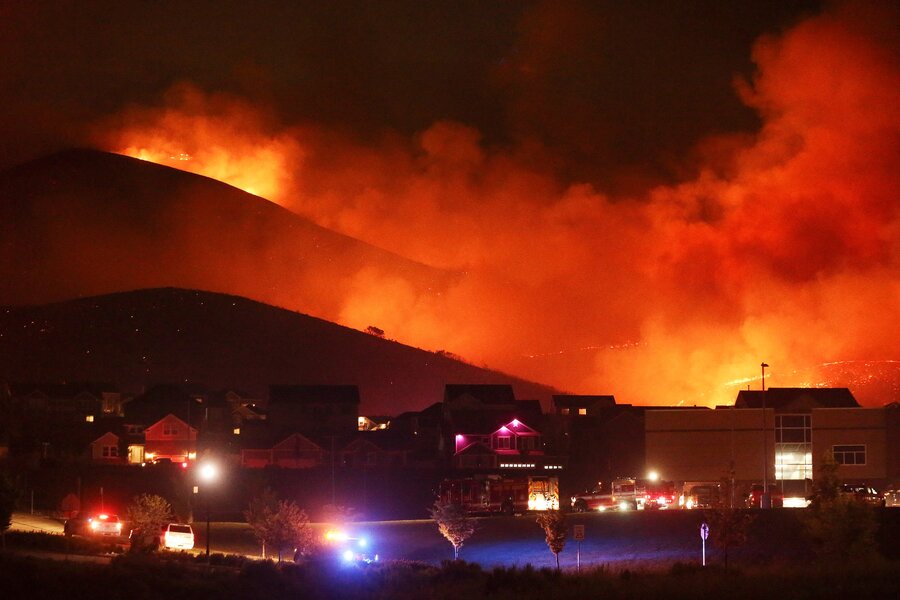 Many Americans aching for normalcy as pandemic restrictions end are looking forward to traditional Fourth of July fireworks. But with a historic drought in the United States West and fears of another devastating wildfire season, officials are canceling displays, passing bans on setting off fireworks, or begging for caution.

Fireworks already have caused a few small wildfires, including one started by a child in northern Utah and another in central California. Last year, a pyrotechnic device designed for a baby’s gender reveal celebration sparked a California blaze that killed a firefighter during a U.S. wildfire season that scorched the second-highest amount of land in nearly 40 years.

Some regions of the American West are experiencing their worst drought conditions in more than a century this year, said Jennifer Balch, director of Earth Lab at the University of Colorado. People setting off fireworks at home is a concern because of both the tinder-box conditions ripe for starting wildfires and the threat of injuries. Last year, injuries spiked to their highest level in 15 years after the pandemic canceled large gatherings, federal data shows.

“As a fire scientist, I’m bracing myself for this fire season because of how dry and hot it is already,” Ms. Balch said. “I think fireworks right now are a terrible idea.”

“We think we’re going to have a tremendous year,” said James Fuller, a fireworks safety expert with Alabama-based TNT Fireworks.

While fireworks are integral to the country’s Independence Day celebrations, they ignite thousands of fires a year – including one that burned Bobbie Uno’s home in Clearfield, Utah, on the holiday last year. She had to jump out of the way before it struck the side of her house.

“Within five seconds, my house, from the bushes to the rooftop, it was burning,” Ms. Uno said. The blaze caused $60,000 in damage and forced her family out of their home for weeks.

“I want everyone to be aware of the danger, because it’s scary even in a small cul-de-sac,” Ms. Uno said.

Several Utah cities are banning people from setting off their own fireworks this year during the record drought, but many Republicans are against a statewide prohibition. GOP Salt Lake County Councilwoman Aimee Winder Newton supports restrictions but thinks this year is a bad time for a blanket ban.

“We’re just coming out of this pandemic where people already felt like government was restricting them in so many ways,” she said.

“When you issue bans arbitrarily, we could have a situation where people who weren’t going to light fireworks purposely go and buy fireworks to just send a message to government.”

State fireworks laws vary considerably across the U.S., but local bans on personal fireworks are popping up from Montana to Oregon, which was stricken by massive wildfires last year.

In Arizona, which already is being scorched by more than a dozen wildfires, many cities have canceled their public fireworks shows. The Yavapai-Apache Nation typically hosts a display outside its casino near the central Arizona city of Camp Verde.

“This year, with conditions being worse than last year, we decided in May that we would not have fireworks,” said James Perry, a spokesman for the tribe’s Cliff Castle Casino Hotel. “Based on the large fires currently burning in and around our community, we’re happy with our decision.”

It’s a similar story in Colorado, where dozens of shows have been scuttled, including in Steamboat Springs, a ski town where firefighters are already spread thin.

“The grass always catches on fire … why are we doing something that causes fire when fire’s our biggest issue?” said Winnie DelliQuadri, town special projects manager.

But in neighboring Wyoming, business is booming at fireworks stores, including sales of products prohibited elsewhere. The parking lots fill on weekends, and many cars have out-of-state plates.

Other cities, including Boise, Idaho, and Santa Fe, New Mexico, are working to ban personal fireworks while keeping their public displays, where safety precautions are often stronger and firefighters are on alert.

In North Dakota, where more than two-thirds of the state is in extreme or exceptional drought – the two worst categories – some areas are passing local bans. In South Dakota, where conditions are somewhat less dire, the governor is fighting the federal government to hold a fireworks display at Mount Rushmore.

A show that draws tens of thousands of people to Lake Tahoe, Nevada, near the California state line, was originally canceled for the second year in a row, but organizers later decided to mount a “smaller, safe fireworks experience.” Holding fireworks shows over water is one of the safer ways to celebrate, said Ms. Balch, the professor.

The industry urges people lighting their own fireworks to follow local restrictions, pick a flat location a safe distance from homes, have a water source at hand to douse used products, and dispose of them carefully.

Some safety officials would rather see people avoid lighting their own fireworks altogether. Michele Steinberg with the National Fire Protection Association pointed to federal data showing 15,600 Americans went to emergency rooms for fireworks-related injuries last year, thousands more than the year before.

“I love watching the fireworks displays, but they’re honestly not safe in consumer hands,” she said. “Even a sparkler can get up to 1,200 degrees, which is actually how hot a wildfire burns.”