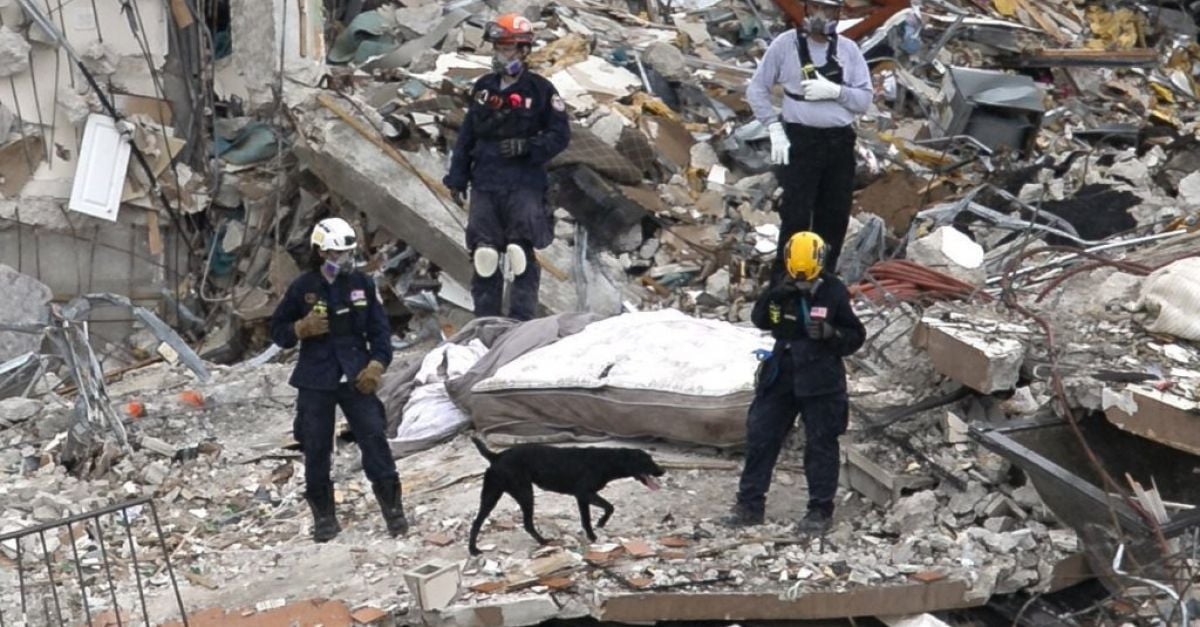 Rescuers continued their search for survivors of a Florida condo building collapse on Tuesday as the confirmed death toll rose to 11.

Authorities said their efforts were still a search-and-rescue operation, but no one has been found alive since hours after the collapse on Thursday.

Two more bodies were recovered on Monday, bringing the confirmed death toll to 11.

They were later identified as 50-year-old Frank Kleiman and 50-year-old Michael David Altman in a Miami-Dade Police news release that also named 52-year-old Marcus Joseph Guara as one of the bodies recovered on Saturday.

More than 150 others are still missing in the community of Surfside, just outside Miami.

The pancake collapse of the building left layer upon layer of intertwined debris, frustrating efforts to reach anyone who may have survived in a pocket of space.

Miami-Dade assistant fire chief Raide Jadallah said during a news conference: “Every time there’s an action, there’s a reaction. It’s not an issue of we could just attach a couple of cords to a concrete boulder and lift it and call it a day.

“Some of the concrete pieces are smaller, the size of basketballs or baseballs.”

Underscoring the risks of the work, he noted that families who rode buses to visit the site on Sunday witnessed a rescuer tumble 25 feet down the pile.

Mr Jadallah said workers and victims must both be considered, adding: “It’s going to take time. It’s not going to happen overnight. It’s a 12-storey building.”

Relatives also continued their visits on Monday. From outside a neighbouring building, more than two dozen family members watched teams of searchers excavate the building site. Some held onto each other for support. Others hugged and prayed. Some people took photos.

Early on Monday, a crane lifted a large slab of concrete from the debris pile, enabling about 30 rescuers in hard hats to move in and carry smaller pieces of debris into red buckets, which are emptied into a larger bin for a crane to remove.

The work has been complicated by intermittent rain showers, but the fires that hampered the initial search have been extinguished.

Jimmy Patronis, Florida’s chief financial officer and state fire marshal, said it was the largest deployment of such resources in Florida history that was not due to a hurricane.

He said the same number of people were on the ground in Surfside as during Hurricane Michael, a devastating Category 5 hurricane that hit 12 counties in 2018.

Andy Alvarez, a deputy incident commander with Miami-Dade Fire Rescue, told ABC’s Good Morning America that rescuers have been able to find some voids, or spaces, inside the wreckage, mostly in the basement and the parking garage.

He said: “We have been able to tunnel through the building. This is a frantic search to seek that hope, that miracle, to see who we can bring out of this building alive.”

The building collapsed just days before a deadline for condo owners to start making steep payments toward more than 9 million dollars (£6.48 million) in repairs that had been recommended nearly three years earlier, in a report that warned of “major structural damage”.

A federal team of scientists and engineers are conducting a preliminary investigation at the site and will determine whether to launch a full probe of what caused the building to come down.

The National Institute of Standards and Technology also investigated disasters such as the collapse of the twin towers on 9/11, Hurricane Maria’s devastation in Puerto Rico and a Rhode Island nightclub fire that killed 100 people.