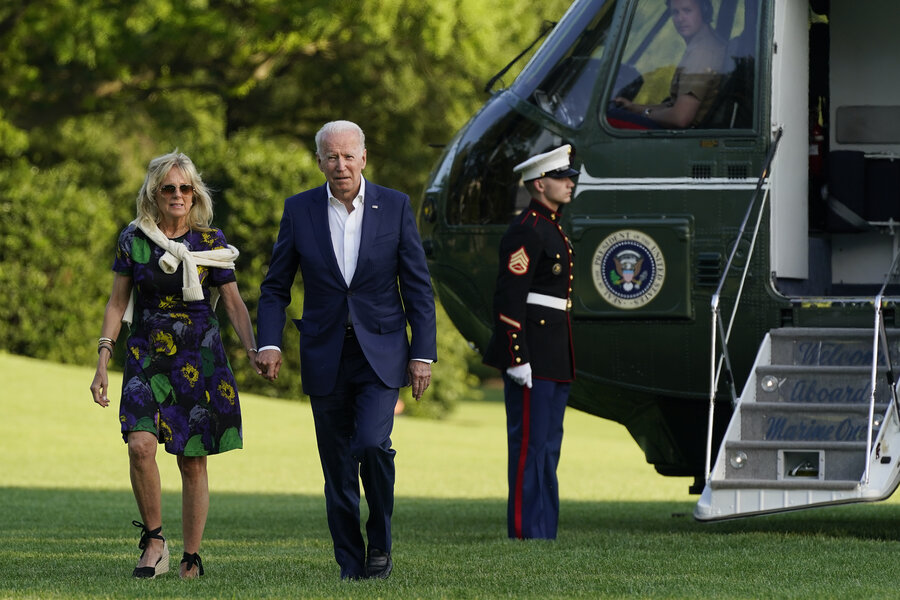 The U.S. military, under the direction of President Joe Biden, carried out airstrikes against what it said were “facilities used by Iran-backed militia groups” near the border between Iraq and Syria, drawing condemnation from Iraq’s military and calls for revenge by the militias.

Pentagon Press Secretary John Kirby said the militias were using the facilities to launch unmanned aerial vehicle attacks against U.S. troops in Iraq. It was the second time the administration has taken military action in the region since Mr. Biden took over earlier this year, but there is no indication that Sunday’s attacks were meant as the start of a wider, sustained U.S. air campaign in the border region.

Mr. Kirby said the U.S. military targeted three operational and weapons storage facilities – two in Syria and one in Iraq. In its release of videos of the strikes by Air Force F-15 and F-16 aircraft, the Pentagon described one target as a coordination center for the shipment and transfer of advanced conventional weapons.

Mr. Kirby said the airstrikes were “defensive,” saying they were launched in response to the attacks by militias.

“The United States took necessary, appropriate, and deliberate action designed to limit the risk of escalation – but also to send a clear and unambiguous deterrent message,” Mr. Kirby said.

The Pentagon said the facilities were used by Iran-backed militia factions, including Kata’ib Hezbollah and Kata’ib Sayyid al-Shuhada.

A Pentagon spokeswoman, Navy Cmdr. Jessica McNulty, said Monday that each strike hit its intended target and that the U.S. military was still assessing the results of the operation.

“The targets selected were facilities utilized by the network of Iran-backed militia groups responsible for the series of recent attacks against facilities housing U.S. personnel in Iraq,” Ms. McNulty said. She said those groups have conducted at least five such “one-way” drone attacks since April.

Secretary of State Antony Blinken, speaking to reporters in Rome on Monday, said Mr. Biden has been clear that the U.S. will act to protect American personnel.

“This action in self-defense to do what’s necessary to do to prevent further attacks, I think sends a very important and strong message. And I hope very much that it is received,” he said. “I think we’ve demonstrated with the actions taken last night and actions taken previously, that the president is fully prepared to act and act appropriately and deliberately to protect us.”

Two Iraqi militia officials told The Associated Press in Baghdad that four militiamen were killed in the airstrikes near the border with Syria. Both spoke on condition of anonymity because they were not authorized to give statements. They said the first strike hit a weapons storage facility inside Syrian territory, where the militiamen were killed. The second strike hit the border strip.

The Syrian Observatory for Human Rights, a Britain-based group that closely monitors the Syrian conflict through activists on the ground, reported that at least seven Iraqi militiamen were killed in the airstrikes.

The Iran-backed Iraqi militia factions vowed revenge for the attack and said in a joint statement they would continue to target U.S. forces. “We … will avenge the blood of our righteous martyrs against the perpetrators of this heinous crime and with God’s help we will make the enemy taste the bitterness of revenge,” they said.

The Popular Mobilization Forces, an Iraqi state-sanctioned umbrella of mostly Shiite militias – including those targeted by the U.S. strikes – said their men were on missions to prevent infiltration by the Islamic State group and denied the presence of weapons warehouses.

Iraq’s military condemned the strikes as a “blatant and unacceptable violation of Iraqi sovereignty and national security.” It called for avoiding escalation, but also rejected that Iraq be an “arena for settling accounts” – a reference to the U.S. and Iran. It represented rare condemnation by the Iraqi military of U.S. airstrikes.

In Iran, foreign ministry spokesman Saeed Khatibzadeh accused the U.S. of creating instability in the region. “Definitely, what the U.S. is doing is disrupting the security of the region,” he said on Monday.

Sunday’s strikes mark the second time the Biden administration launched airstrikes along the Iraq-Syria border region. In February, the U.S. launched airstrikes against facilities in Syria, near the Iraqi border, that it said were used by Iranian-backed militia groups.

The Pentagon said those strikes were retaliation for a rocket attack in Iraq earlier that month that killed one civilian contractor and wounded a U.S. service member and other coalition troops.

At that time, Mr. Biden said Iran should view his decision to authorize U.S. airstrikes in Syria as a warning that it can expect consequences for its support of militia groups that threaten U.S. interests or personnel.

“You can’t act with impunity. Be careful,” Mr. Biden said when a reporter asked what message he had intended to send.

On Sunday, Mr. Kirby said: “Given the ongoing series of attacks by Iran-backed groups targeting U.S. interests in Iraq, the President directed further military action to disrupt and deter such attacks.”

The Pentagon spokesman added: “As a matter of international law, the United States acted pursuant to its right of self-defense. The strikes were both necessary to address the threat and appropriately limited in scope.”

House Speaker Nancy Pelosi said in a statement Sunday that the U.S. airstrikes “appear to be a targeted and proportional response to a serious and specific threat,” adding, “Protecting the military heroes who defend our freedoms is a sacred priority.”

US COVID-19 infections rise as Americans prepare for Thanksgiving