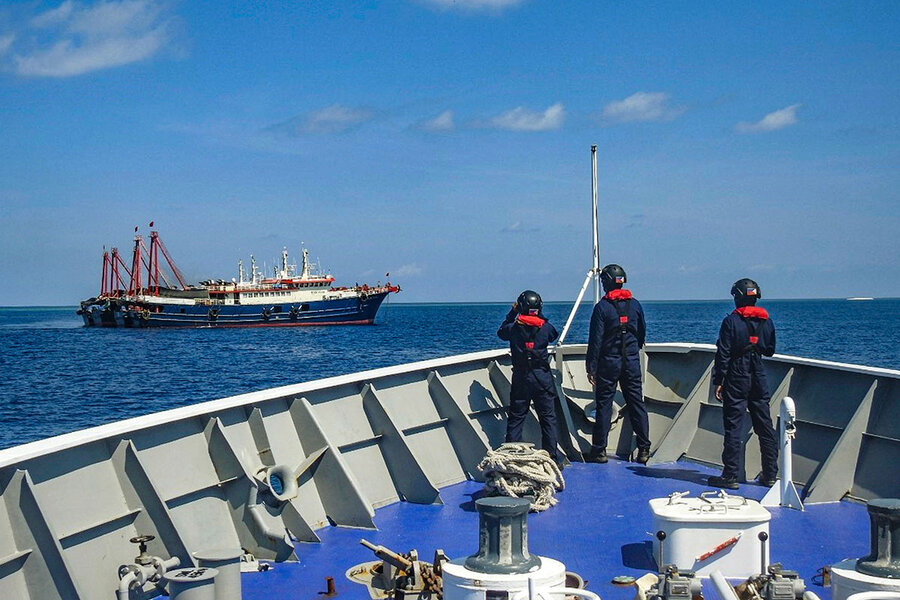 Why is control of the sea so contested?

The United Nations Convention on the Law of the Sea formalizes countries’ rights and responsibilities on the world’s oceans. The convention established the idea of exclusive economic zones: the area stretching 200 nautical miles from a state’s coastline, where it has special rights to exploit resources. Where countries’ EEZs overlap, UNCLOS says they must negotiate.

“UNCLOS was supposed to stop conflict by creating clarity over who had the right to exploit resources in those EEZs,” says Ann Marie Murphy, a professor at Seton Hall University who is an expert on security in Southeast Asia. Instead, “countries began to extend their baselines, argue over continental shelves, realize they have overlapping EEZs … these disputes go back decades.”

But China claims everything within the “nine-dash line,” stretching from Taiwan to Malaysia – a vaguely defined boundary purportedly based on old maps, according to James Chin, director of the Asia Institute Tasmania at the University of Tasmania.

In 2016, an international tribunal at The Hague ruled there was no legal basis for such a claim. China rejected the decision, and other countries have continued to complain about Chinese vessels in their waters. Other claimants are “essentially being bullied out of their own EEZs and out of what is supposed to be an area of freedom of passage,” says Joshua Kurlantzick of the Council on Foreign Relations.

What does this have to do with the U.S.?

The South China Sea is thought to contain huge oil and natural gas reserves, and around one-third of the world’s maritime trade is estimated to pass through it, worth more than $3 trillion every year. Washington sees free movement through the area as essential, and conducts “freedom of navigation” naval patrols to protect it. “From the U.S. perspective, the nine-dash line map is an attempt [by China] to privatize the global commons,” says Professor Murphy.

U.S. officials have framed China’s behavior as a challenge to the rule of law. Washington also has important allies in Southeast Asia, and aims to push back on China’s increasing dominance in the region. “It’s not only Southeast Asia, but the world has now woken up to the fact that they can’t live without China,” says Professor Chin.

In Beijing’s eyes, the South China Sea is its backyard and Southeast Asian countries are wary of alienating a key economic partner. “We’ve always lived under the dragon. The Southeast Asian attitude is that we cannot run away from the Chinese shadow,” Professor Chin adds.

Many regional economies took a beating during the pandemic. In the meantime, China has been pushing ahead, building more artificial islands and military bases. “It’s probably angered a lot of countries in the region because it makes it seem like China is not only continuing in a very assertive approach, this is actually taking advantage of their vulnerabilities,” says Mr. Kurlantzick.

So far, the Biden administration has maintained the Trump administration’s hard line on China, and continues to conduct “freedom of navigation” operations. Mr. Biden has also pressured other democracies to take a stronger stance against Beijing. But in the South China Sea, a unified Southeast Asian effort “has a better chance than the U.S. and China sitting down and trying to resolve it,” Mr. Kurlantzick says.

Recently, some countries have taken small steps toward resolving competing interests. In April, Malaysia and Brunei agreed to jointly develop oil and gas fields along their maritime boundary. Malaysia and Vietnam have also indicated they will sign an agreement in an attempt to settle their differences. And in June, the Association of Southeast Asian Nations and China pledged to avoid escalating tensions.