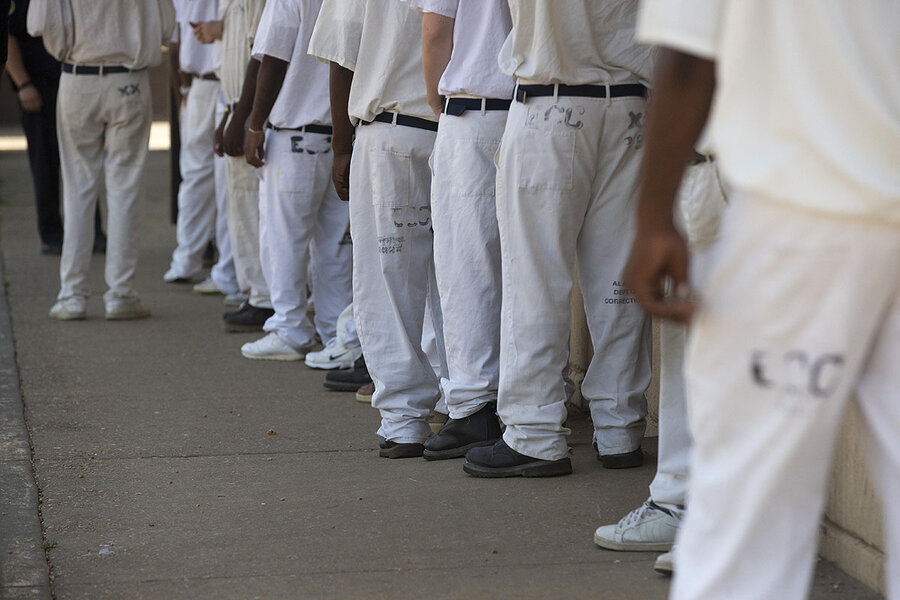 Champ Napier is the exception.

From his birth in Prichard, Alabama, the third-poorest city in America, he faced an uphill climb just to stay out of poverty and prison. Mr. Napier remembers the Ku Klux Klan burning crosses on his schoolyard, white residents yelling obscenities at his school bus. The site of the last recorded lynching in 1981 is in nearby Mobile.

As a teen, he quit high school to sell drugs, thinking it was the fastest way out of poverty. When a drug deal went wrong, he shot a man six times. At 18, he was sentenced to life in prison for first-degree murder.

Home to more than half of America’s Black population, the South has taken a severe approach to criminal justice. Understanding that link is key to breaking a cycle of poverty to prison.

But 15 years inside Alabama prisons bred a determination to find a new path. And in 2015, more than 10 years after his parole, he became the first-ever Alabamian convicted of murder to receive a complete pardon. Now he works as a client advocate for the Mobile County Public Defender’s Office to help others avoid a system he barely survived.

“Our rite of passage shouldn’t be from poverty to prison,” says Mr. Napier.

His story speaks to the challenges of breaking that vicious cycle, particularly in the South. Nationwide, that cycle has contributed to Black people being imprisoned at five times the rate of white people. Moreover, studies show that Black people are also routinely sentenced more harshly for the same crime.

But in the South, where more than half of all Black Americans live, these trends are amplified by historical racism, higher rates of poverty, and a more punitive justice system. The South includes 8 of America’s 10 most incarcerative states, according to Bureau of Justice Statistics data compiled by The Sentencing Project.

The path to addressing racial issues within the criminal justice system starts with understanding where those issues came from, says Leah Nelson, research director at Alabama Appleseed Center for Law & Justice.

“It’s so important to look at those things and see the society that we live in now as a consequence of [decades] of structural racism that replaced slavery and Jim Crow,” says Ms. Nelson. “We inherit the consequences. We can try to fix them.”

A portrait of Southern justice

The general portrait of the justice system in the South is one of severity. What makes the region different is its support for harsh penalties, says Michael Jackson, district attorney for Dallas County in Alabama.

Florida requires everyone convicted of a crime to serve at least 85% of their sentence, producing one of the country’s oldest incarcerated populations. Louisiana, dubbed the incarceration capital of the world, is one of two states that mandates life without parole for even second-degree murder. Three-strike laws, like Alabama’s Habitual Felony Offender Act, permit life sentences for low-level crimes if a defendant has multiple felonies on record.

The death penalty is legal in all but one Southern state, and since the 1970s the region has used it more than all other states combined.

In addition, many in detention have not been convicted.

Around 70% of people in U.S. jails are there because they can’t afford bail or were placed in preventive detention, says Jeremy Cherson, a senior policy adviser at The Bail Project. The South has the highest pretrial detention rate in the country.

And former prisoners who do reenter society often face greater hurdles in the South. Of the 10 states with the highest rate of disenfranchising those convicted of a felony, nine are in the South.

This creates a gravitational pull, making it hard for those in the system to get out. For Black Southerners, that includes the significant pull of history.

In 1704, the Carolinas enacted the Colonies’ first slave patrol, and its neighbors soon followed. By the century’s end, the U.S. Congress had passed a fugitive slave law, and every slave state had a slave patrol. Out of these grew the region’s police forces and criminal codes, regularly affirmed by a Southern-dominated Supreme Court.

Even after the Civil War, convict leasing permitted states to loan those incarcerated to farms and businesses seeking cheap, fungible labor. Black codes and Jim Crow laws barred Black Americans the right to sit on a jury, and set harsh penalties for offenses like minor theft and vagrancy (essentially unemployment).

After the civil rights movement, many Southern states coded once explicitly racist policies into laws that drove mass incarceration, says Talitha LeFlouria, professor of African American studies and an expert on mass incarceration at the University of Virginia. Law and order politics and the war on drugs produced wide racial sentencing disparities, many of which persist today. For example, despite equal usage, Black Alabamians are four times more likely than white Alabamians to be arrested for marijuana possession.

The shadows of these historical prejudices still linger in courtrooms themselves, too.

Across the South, there are few Black judges and prosecutors, says Mr. Jackson, the first Black president of the Alabama District Attorneys Association. And Black citizens are frequently excluded from jury duty, according to a report by the Equal Justice Initiative.

“Some of these issues we dealt with in the 1950s and 1960s, we’re still grappling with them today,” adds Mr. Jackson.

Prison conditions and the hope of reform

Southern states incarcerate all racial groups at such high rates that the ratio for Black incarceration compared with other racial groups is actually lower than in some other regions. Yet because of those high incarceration numbers, the proportion of Black people in jail in the South is still higher than the national average.

Pretrial detention makes defendants more likely to plead guilty, regardless of guilt. It also leads to more time in prison and a higher recidivism rate, according to research from the Brookings Institution and the American Enterprise Institute.

The conditions of many Southern detention facilities can make a stay in prison especially harmful. Last December, the Department of Justice filed a lawsuit against Alabama’s entire male prison system for violating Eighth Amendment rights, which include protection from cruel and unusual punishment.

“It’s the worst place to be while you’re still alive,” he says.

But criminal justice reform has recently become a more bipartisan issue, including in the South. In places, policymakers are seeking to reduce mass incarceration and strengthen the safety net for formerly incarcerated people.

Yet attempts at reform often hit dead ends. In Savannah, Georgia, the district attorney recently asked for $280,000 to hire four new prosecutors. The goal was to speed up the cases of 63 inmates who have each been awaiting trial in jail for more than 1,000 days. One has spent 12 years in detention without a conviction. The county commission denied the request, suggesting a study.

For those hoping for change, the wait can be long.

When Donchelle Jackson married her husband, Naserie Jackson, he was already in prison. He had been given a life sentence for accidentally killing a nearby boy when he pulled a gun on someone during a violent confrontation on his front lawn.

The couple had dated in high school but didn’t keep in contact until a friend told Ms. Jackson that Mr. Jackson was incarcerated. She wrote him a letter. He wrote back.

When they married, he had an “R” on his prison fatigues, indicating he was a restricted inmate and ineligible for work release or other programming. That letter has since been removed, and he’s in a halfway camp now, taking art classes and earning his commercial driver’s license.

Mr. Jackson is due for a parole hearing in the fall, and Ms. Jackson hopes he can come home to Mobile. She believes he’s changed. She hopes he has a chance to show the world.

In recent years, she’s become an advocate for criminal justice reform, completing a fellowship with Alabamians for Fair Justice in 2018. She feels like God called her to this work, she says, and that it won’t end if her husband is released.

“You do your part,” she tells him. “You keep that record clear.”

In two or three years, if she can’t make any progress toward getting him released, he’s told her, he’d understand if she needs to walk away.

“My response to him is if you’re giving me that kind of time, then I can walk away now,” Ms. Jackson says. “You don’t get to tell me [when to go]. I say you’re going to come home.”