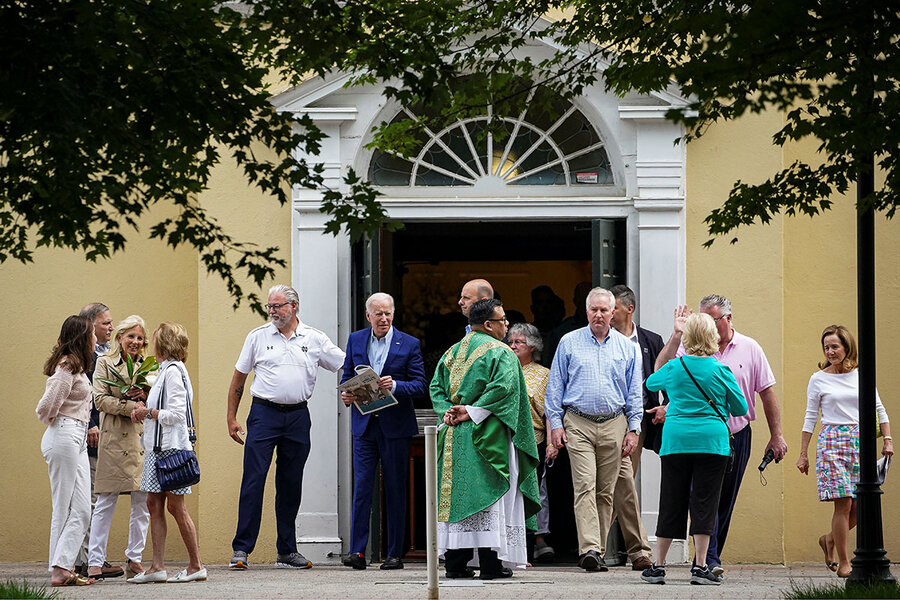 Every weekend, almost without fail, President Joe Biden goes to church. If he’s in Washington, he attends Mass at Holy Trinity Catholic Church in Georgetown. If he’s at home in Wilmington, Delaware, he goes to his family parish, St. Joseph on the Brandywine.

In his victory speech last November, President-elect Biden cited the popular Roman Catholic hymn “On Eagle’s Wings,” and in his inaugural address in January, he quoted St. Augustine. The president often carries a rosary that belonged to his late son, Beau.

That a deep Catholic faith infuses President Biden’s life is hardly a secret, his election as only the second Catholic president almost unremarkable. The contrast with John F. Kennedy’s election in 1960 is stark: The senator from Massachusetts had to fight hard to overcome America’s history of anti-Catholicism. For Mr. Biden, the strong Catholic identity may have been a plus in key Rust Belt states last November.

Catholic voters, like the rest of the U.S., are increasingly polarized around issues like abortion – creating a challenge for Mr. Biden, the nation’s second Catholic president.

Now, the president’s faith is center stage. Today, his top diplomat – Secretary of State Antony Blinken – had a private audience with Pope Francis at the Vatican, in a reset of U.S.-Vatican ties after the uneasy Trump era. Mr. Biden himself is expected to meet with the pope in Rome in October.

And in a burst of controversy, Mr. Biden’s stance on abortion rights – increasingly liberal over the years – returned to the headlines after the conservative-dominated U.S. Conference of Catholic Bishops (USCCB) voted overwhelmingly to draft guidance on the Eucharist, or communion.

The move was widely seen as an effort by conservatives to encourage exclusion of Mr. Biden from the ritual over his political posture on abortion, based on comments from prominent bishops. On June 21, the USCCB released a Q&A clarifying that the vote was not specific to any individuals. Notably, the word “abortion” does not appear in the one-page document.

Still, a larger conflict remains: Rank-and-file American Catholics, a shrinking congregation like most traditional faiths in the U.S., are increasingly at odds with church leadership.

Only one-third of U.S. Catholics believe the core teaching that the bread and wine during communion literally become the body and blood of Jesus Christ, according to a Pew Research Center poll. And two-thirds of American Catholics say Mr. Biden should be allowed to receive communion, despite his abortion politics.

The percentages vary widely by party. Some 87% of Democratic Catholics side with Mr. Biden, while only 44% of Republican Catholics do, Pew found. This disparity mirrors the larger polarization of U.S. politics as well as increasing polarization within the church, say experts on U.S. Catholicism.

“In this country, the two-party system has created a two-party Catholic Church,” says Massimo Faggioli, a professor of theology at Villanova University in Philadelphia and author of the new book “Joe Biden and Catholicism in the United States.” “The political divisions in this country have created a sectarian mentality within Catholicism.”

Professor Faggioli draws a parallel between the political behavior of increasingly conservative white Catholics in the U.S. and white evangelicals. About 6 in 10 non-Hispanic white Catholic voters are now Republican, up from 4 in 10 in 2008, according to Pew. Among non-Hispanic white evangelicals, a mainstay of the GOP, 8 in 10 voted for Donald Trump both in 2016 and 2020.

The Southern Baptist Convention – the nation’s largest Protestant denomination – has been going through its own cultural upheaval, in its case over race, gender, and politics. At the SBC’s recent annual meeting, the denomination narrowly averted an ultraconservative takeover.

“The situation is similar” but not identical, says Professor Faggioli. Catholics, he notes, are unlikely to split into two churches, as the Baptists did in the mid-1800s over slavery. “I believe there’s a sense of unity in the Catholic Church that we’re still holding, but I’m not sure about the future. I think what’s happening is a soft schism.”

LGBTQ rights are another point of contention. The pope made headlines last October when he endorsed same-sex civil unions. Mr. Biden is an even more liberal ally, endorsing same-sex marriage as vice president before President Barack Obama did. In 1960, when Mr. Kennedy was running for president, the concern over Catholicism centered on fear of Vatican influence in the U.S. government. The big political issue was prayer in schools, not abortion or gay rights.

Today, church politics and U.S. politics are intertwined. Before the U.S. bishops voted to draft communion guidance, the Vatican warned them against taking steps that could lead to denial of the sacrament to politicians who support abortion rights. The issue is relevant to other pro-abortion-rights Catholic politicians, including Democratic House Speaker Nancy Pelosi and former Secretary of State John Kerry, now Mr. Biden’s special climate envoy. Both have faced calls from bishops for denial of communion, including when Mr. Kerry was the Democratic presidential nominee in 2004.

Decisions to grant or deny communion are ultimately made by the local bishop. In 2019, as a presidential candidate, Mr. Biden was denied communion by a priest in South Carolina. But despite the conservative tilt of the USCCB, President Biden has not been in danger of losing access to communion either in Washington or Wilmington, where the relevant bishops lean liberal.

Mr. Biden has said little publicly about the issue. When asked about the U.S. bishops’ vote to draft a communion statement and the potential for a rift in the Catholic Church, he said, “That’s a private matter, and I don’t think that’s going to happen.”

Complicating matters is the return of abortion politics to the U.S. Supreme Court. Now with a 6-3 conservative majority, the high court has agreed to hear a Mississippi case this fall that could significantly pare back the right to abortion under the 1973 precedent, Roe v. Wade.

The case has energized activists on both sides ahead of the 2022 midterm elections, and shines a light on Mr. Biden’s increasingly liberal position on abortion.

As a senator, Mr. Biden used to emphasize that he personally opposed abortion while refusing to impose his views on others. Now he espouses the mainstream Democratic position emphasizing women’s rights. Two years ago, Mr. Biden abandoned his long-held opposition to a ban on federal funding for most abortions.

In American politics, Democrats who identify as “pro-life” are a vanishing breed, as the two parties become more homogeneous. Even defining the “Catholic vote” can be difficult. In the 2020 election, voters who self-identified as Catholic split nearly evenly between Mr. Biden and Mr. Trump. But one expert on Catholic voters says there’s a split between “practicing Catholics” – that is, those who attend Mass weekly and follow all church tenets, including on abortion and same-sex marriage – and others.

Mr. Marlin also defends the U.S. bishops in their decision to issue a statement on the Eucharist. “They have an obligation to spell out directly the teachings of the church,” he says. “No one forces people to be Roman Catholic. You can’t have your cake and eat it too.”

His comment hints at the past statement of a high-ranking U.S. cleric that a “smaller, lighter” church of purer belief would be preferable to one that is larger and less faithful to the full range of church teachings.

Conservative Catholics’ emphasis on abortion does put pressure on lay Catholics to choose sides, liberal church activists say. Sister Simone Campbell – head of the Network Lobby for Catholic Social Justice, who offered a prayer at the 2020 Democratic convention – said in January that the “political obsession” with the “criminalization of abortion” has broken the church apart.

When asked last year by the Catholic News Agency whether her organization opposes legal abortion, Sister Simone responded, “That is not our issue.”

In the U.S.-Vatican relationship, smoother sailing is expected under President Biden than under President Trump, both in style and substance – though perspectives still diverge at times. In Secretary Blinken’s meeting Monday with the pope and top Vatican officials, “there is a deep and long laundry list of issues to talk about,” including climate change, refugees, and China, says Shaun Casey, who served as U.S. special representative for religion and global affairs under President Obama.

The Vatican welcomed the U.S. return to the Paris climate accord, but the China question is trickier, following a 2018 deal allowing the Vatican to appoint bishops in China.

“In countries where the Catholic Church is a tiny, oppressed minority, the goal of their diplomacy is to make life easier for the faithful,” which differs from the U.S.’s much broader agenda with China, says Professor Casey, director of the Berkley Center for Religion, Peace, and World Affairs at Georgetown University.

Still, he adds, the Vatican is a “strong advocate for religious freedom for all people,” including China’s oppressed Uyghurs.

Back in the U.S., the larger controversy over Mr. Biden and communion has not only served to highlight intra-church conflicts – but could also engender sympathy for a president whose Catholic faith infuses his life and has provided comfort at times of personal tragedy.

“Catholicism is at his core,” says Bobby Juliano, a longtime Washington lobbyist who has known Mr. Biden and his family since 1973.

In a 2007 interview with the Monitor on his faith, then-Senator Biden said he was troubled by church sex-abuse scandals involving children, but his commitment to the church was unchanged.

“This is my church as much as it is the church of a cardinal, bishop, or janitor,” he said, “and I’m not going anywhere.”