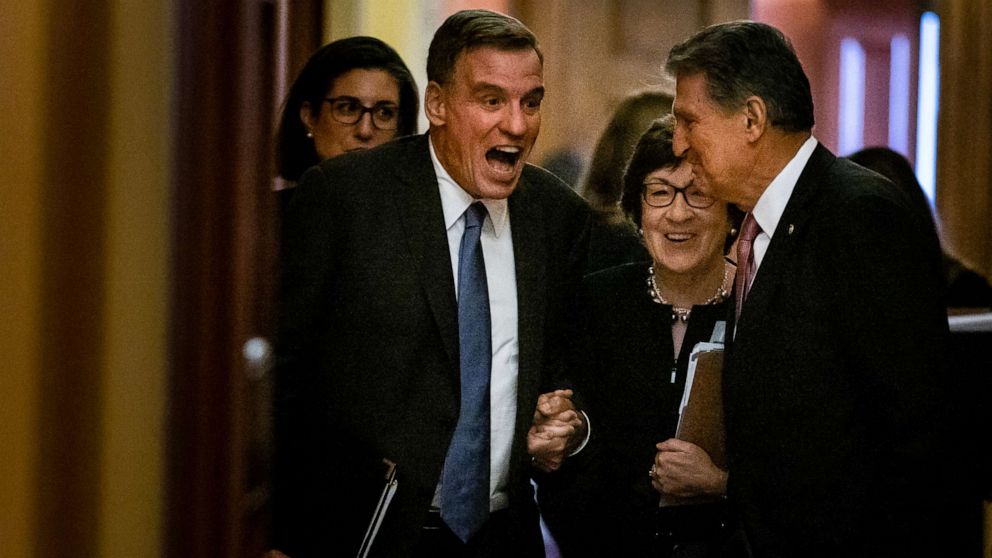 The word of the day is “framework.” And the mood of the day, so far as the White House is concerned, is optimism — at least for now.

President Joe Biden has the chance to play the role he has long coveted on Thursday. A bipartisan group of senators will be at the White House to brief him on an infrastructure package his top aides have been involved with crafting and that might not even be the only deal out there to be cut.

“Republicans and Democrats have come together, along with the White House, and we’ve agreed on a framework,” Sen. Mitt Romney, R-Utah, told reporters late Wednesday, according to ABC News’ Trish Turner.

Big questions linger on whether the price tag is too big or too small, how the package would be financed and whether everyone in Biden’s own party even wants a deal. As a practical matter, though, talks suddenly seem too far along — and have too much White House involvement — for the president to scuttle it all without major repercussions.

For Democrats who have found themselves on the defensive of late, between a stalled effort on voting rights and fears of the politics of crime and of the border, the concept of delivering on infrastructure even in a scaled-down manner is tempting.

For senators in both parties who have been eager to legislate and address urgent priorities, a similar appeal has taken hold. The chief negotiators on policing reform are also making positive sounds about the possibility of a bipartisan deal.

This is hardly an indication that the long-running partisan fever of Washington is breaking, or of the GOP “epiphany” Biden once predicted would come after his election. But any victory for Biden that includes Republicans would be notable — and prominent voices in both parties would indeed be taking notes.

As cities across the nation struggle to confront rising violent crime rates, Biden laid out his plan to take on gun violence on Wednesday. Joined by Attorney General Merrick Garland, Biden outlined plans to curb the practices of gun dealers who do not follow federal rules and bolster programs for recently released convicts.

Biden also said his plan would provide more support for police departments through reallocated money from the American Rescue Plan.

“Cities experiencing an increase in gun violence are able to use the American Rescue Plan dollars to hire police officers needed for community policing and to pay their overtime,” the president said.

Biden also noted that the funds could be used to invest in “crime fighting technologies like gunshot detection systems,” as well as services aiming to help with substance abuse and mental health issues among residents.

But the move opens the White House to the delicate intraparty debate over the nation’s policing practices as progressive Democrats want to see more accountability over how police forces are funded and utilized, while others in the party want to steer clear of the “defund-the-police” policy label heading into next year’s midterm elections.

The success of Biden’s plan is likely to be resurrected on the campaign trail, given Republicans’ increasing calls for “tough-on-crime” and “law-and-order” policies.

For the first time six decades, a socialist is poised to become mayor of a major U.S. city.

India Walton, 38, upset the Democratic establishment by defeating four-term Mayor Byron Brown in the Buffalo, New York, primary Tuesday. Given the city is reliably blue, she’ll likely coast to victory in November, and while she’d be the first female mayor of Buffalo, it’s her progressive chops that are making headlines.

Buffalo is the second largest — albeit a distant second — city in New York State, and the Democratic mayoral primary’s outcome there stands in stark contrast to New York City’s, where Eric Adams, the Brooklyn borough president and a former police captain, is currently leading in the preliminary count of first-choice, in-person votes.

How to address crime and policing was at the center of that crowded primary, with more moderate candidates like Adams calling for greater investment in law enforcement. Compare that to Walton, a community activist, whose public safety plan includes transformative goals.

“We are spending about a third of our budget on policing and crime is not down — so we are doing something wrong, and we need to take a step back and look at how we’re allocating funding,” Walton told ABC’s Buffalo affiliate.