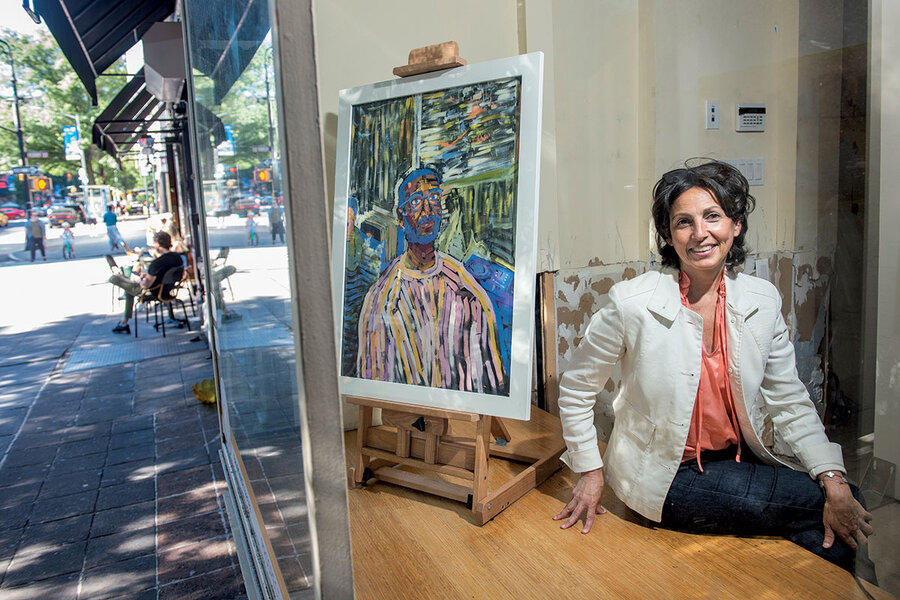 When New York City became the epicenter of the COVID-19 pandemic last year, Barbara Anderson, a middle school teacher, saw her Upper West Side neighborhood changing all around her. Neighbors left the city, unemployment rose, and long-standing shops closed their doors, leaving blocks of empty storefronts in their wake.

“Every day, seeing more and more empty storefronts, it was kind of just like, well, what do I tell my students?” recalls Ms. Anderson. “‘If you see a problem you can sit and complain or you can try to do something about it.’”

So she decided to do something about it.

Boarded-up shops send a negative signal. Art on the Ave turns that common pandemic sight into a positive, inviting underrepresented artists to fill windows with work for sale.

Last June Ms. Anderson founded Art on the Ave, which creates free exhibits in New York City neighborhoods by using empty storefronts as gallery space. It’s a solution that connects the new problem of abandoned storefronts with a long-standing one – a somewhat insular art scene that Art on the Ave makes more accessible for patrons and artists alike.

“You can have the talent, but how do you put your art out there for people to see? You have to have a lot of contacts in New York,” says Paola Bermudez, an artist who participated in the first exhibit, called “Healing,” on the Upper West Side, as well as the current exhibit – “Awakening” in the West Village.

“Art on the Ave has been this blessing for me,” says Ms. Bermudez, who has lived in New York since moving here from Colombia a decade ago. “My artistic career just got launched in an amazing way.”

Passersby can scan a QR code on the storefront window to hear the artists talk about their work. They can also find links to purchase the artwork – all of which must be priced under $5,000 – directly from the artists, as well as links to the property owners’ websites. The artists must be New York-based and almost 40% of them thus far members of minority groups.

The “Healing” exhibit, which ran from November 2020 through January 2021, showcased 55 works of art by 41 artists across 12 storefronts. More than a dozen pieces sold, earning roughly $60,000 for the local artists. The current exhibit “Awakening,” which runs through early July, features 28 works in 13 locations in the West Village. More than a dozen pieces have already sold in the second exhibit, earning more than $32,000 for the participating artists.

Ms. Bermudez sold both of her pieces shown in the Upper West Side exhibit. Between the two exhibits, she has had at least three commissions come from locals calling about a piece of art they saw in a storefront window.

According to a recent study by the city government, vacancy rates were climbing even before the pandemic, due to high rents and shifting retail trends. An average of 2017 and 2018 data suggests more than 1 in 10 storefronts were empty, and COVID-19 only accelerated these trends, with retail space rent hitting record lows in late 2020 across much of New York City.

Bleecker Street, for example, is one of the busiest, most popular streets in one of the most popular neighborhoods. On one block with 17 storefronts, seven are empty. The potential to fill those spaces confirmed Ms. Anderson’s idea that the Art on the Ave project could expand citywide.

And while New York City is expected to rebound from COVID-19-induced vacancies, Ms. Anderson feels confident that Art on the Ave can continue in the future. The city’s retail space will never be rented 100%, and both of their exhibits have also had active businesses participate, as store managers see the potential for more foot traffic and a way to engage with the local community.

The Art on the Ave team is currently accepting submissions for their third exhibition – “Resiliency” – scheduled this fall in lower Manhattan to coincide with the 20-year anniversary of the 9/11 terrorist attacks.

But landlords’ willingness to participate varies, says Ms. Anderson. They are not paid rent. Planning can be difficult as some properties do get rented during an exhibit. Several times when this has happened, however, a property owner will suggest moving the artwork to a vacant location nearby.

“What I’d like to say to other landlords is, ‘This really is as easy as it sounds,’” says Pauline Oudin, who owns a townhouse in the West Village. “There’s nothing to lose by doing this.”

Ms. Oudin and her family live upstairs while renting out the ground floor. The nail salon that was renting the space closed during the pandemic, but now four paintings line the shop’s windows. Ms. Oudin says she’s interviewed several potential tenants and thinks the Art on the Ave exhibit has initiated some of these conversations by allowing renters to get a better sense of what the space could look like when occupied.

And three of the four paintings in Ms. Oudin’s windows have already sold.

Down the street at another stop, Ms. Anderson sees an empty soda can on the ground. She lets out a sigh and pulls a plastic bag out of her purse. Using the bag as a barrier between her hand and the New York City sidewalk, Ms. Anderson bends down and picks up the can as well as other litter scattered in front of a storefront’s large “For Rent” sign.

“While the art is here, I try to take care of this space,” she says. “For now, this is a gallery.”