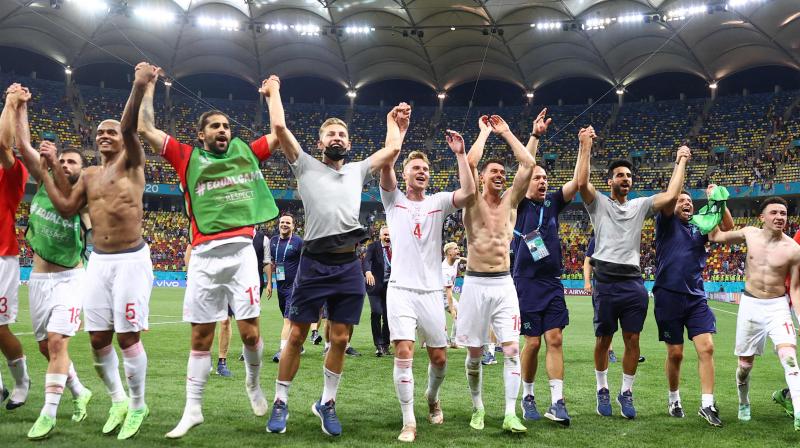 Paris: Kylian Mbappe missed the crucial penalty on Monday as world champions France were sent packing from Euro 2020 in a shoot-out against Switzerland, who go through to a quarter-final tie against Spain after an unforgettable day of drama which featured a total of 14 goals in two games.

France, who came into the tournament as favourites to add the continental crown to the World Cup they won in Russia three years ago, had earlier come from 1-0 down to lead 3-1 and looked to be cruising through, only to concede two late goals.

The game in the Romanian capital followed a 5-3 extra-time win for Spain over Croatia in Copenhagen, and the 2008 and 2012 European champions will face the Swiss in the last eight in Saint Petersburg on Friday.

Switzerland went ahead early on when Haris Seferovic headed in a cross, but they looked set to rue the moment early in the second half when Ricardo Rodriguez's penalty was saved by Hugo Lloris.

By the hour mark the game — watched by a crowd of around 25,000 after coronavirus restrictions in Bucharest were eased — had been turned on its head by Karim Benzema, who controlled Mbappe's pass to fire in the equaliser and then nodded in Antoine Griezmann's centre.

Paul Pogba's stunning curling strike into the top corner seemed to have put Les Bleus out of sight at 3-1 with quarter of an hour left, but Seferovic pulled one back and substitute Mario Gavranovic netted a last-minute equaliser to force extra time.

With no further goals, the tie went to penalties and all nine kicks were converted before Mbappe saw his effort saved by Yann Sommer.

"We are the world champions, so to go out in the last 16 is not a good result.

"We were the first ones to expect better. We will need time to get over this disappointment."

Switzerland, who only qualified for the last 16 as one of the best third-placed sides, had not won a knockout tie at a major tournament since the 1938 World Cup.

"It was an incredible evening. I am so proud of the team," said goalkeeper Sommer.

Somehow the drama in Bucharest topped that in Copenhagen earlier, when Alvaro Morata netted an all-important goal as Spain prevailed in extra time against the 2018 World Cup runners-up, but only after they also let slip a 3-1 lead.

Luka Modric's Croatia came back to force the extra half-hour but that was when Morata, the Atletico Madrid striker who has been panned for his performances by critics and subjected to abuse from fans, controlled a cross and volleyed home in the 100th minute.

Mikel Oyarzabal then secured Spain's victory in what was the highest-scoring game at a European Championship since the opening match of the very first tournament in 1960, when Yugoslavia defeated hosts France 5-4.

Croatia had been gifted a first-half lead when Spain goalkeeper Unai Simon allowed Pedri's back-pass to slip under his foot and in.

But Luis Enrique's side had been the better team prior to that and they levelled through Pablo Sarabia before appearing to run away with the tie in the second half.

Manchester City winger Ferran Torres crossed for Cesar Azpilicueta to head in his first goal for his country and Torres then made it 3-1.

However, Croatia substitute Mislav Orsic pulled one back with five minutes left, the referee indicating that the ball had just crossed the line, and then fellow substitute Mario Pasalic headed in a stoppage-time equaliser.

Croatia, who came through three ties that were not settled before extra time on their run to the World Cup final in Russia, could not recover after falling 5-3 down.

"We were given a second chance in the game, which is not something that often happens," admitted Luis Enrique.

The final last-16 ties will be played on Tuesday, with the blockbuster showdown between England and Germany at Wembley preceding Sweden's clash with Ukraine in Glasgow.

If England beat Joachim Loew's team, it will be only their second knockout stage win at a European Championship.

"It is a fantastic game to be involved in and a real opportunity for us to progress to a quarter-final," said England manager Gareth Southgate on Monday.

"It is a big opponent with excellent pedigree and great experience."