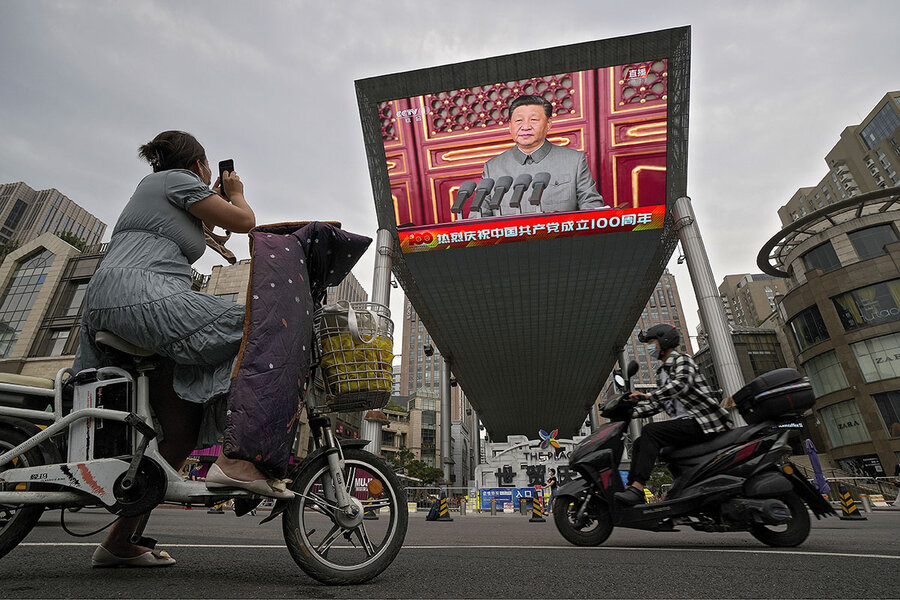 As propaganda marking the 100th anniversary of China’s Communist Party hits fever pitch, party-controlled media outlets are gushing images of red flag-waving crowds and patriotic performances from across the country.

“I compare the party to my mother,” costumed folk singers and onlookers belted out from a plaza in Ulanhot in Inner Mongolia. “My mother only gave birth to me – the glory of the party shines in my heart,” they crooned, in what was billed as a serenade for the party in a recent segment on China Central Television’s evening news.

China’s leaders are using the party’s July 1 birthday to stoke nationalist pride and solidify their power, hammering home messages about the superiority of socialism and the necessity of party control for China’s continued rise. But they are also playing up perceived threats to China, amplifying the narrative that “hostile foreign forces” are bent on keeping China down.

When does love of country go too far – for its own country’s purposes? Beijing’s dialing up of extreme nationalism risks unintended consequences, some analysts warn.

Beijing’s combative diplomacy – executed by envoys who call themselves “wolf warriors,” after the title of a 2017 blockbuster action film – has reached new extremes in recent months. In June, for example, Chinese diplomat Zhang Heqing tweeted an image of a vulgar hand gesture (which now appears to have been deleted), saying it showed “the way we deal with enemies.” “We are wolf warriors,” wrote Mr. Zhang, a cultural counselor at the Chinese Embassy in Pakistan.

The danger to China, analysts abroad say, is that the nationalist playbook of Chinese leader Xi Jinping will isolate the nation of 1.4 billion people at a time when the country needs openness and innovation to tackle problems ranging from an aging population to slowing economic growth.

“The traditional connections … that China has had with the outside world, and the outside world has had in China, are at risk if this general political direction continues, with a paranoid view of the world that’s disseminated within and a very ‘wolf warrior’ approach to the outside world,” says Jude Blanchette, Freeman chair in China studies at the Center for International and Strategic Studies in Washington.

“Increasingly, ‘wolf warrior’ China is turning the world off in important ways to China as a global actor,” he says. This, in turn, could constrict Chinese companies overseas, opportunities for China in multilateral institutions, and China’s ability to integrate with other economies, he suggests.

Indeed, a Pew Research Center survey of 17 advanced economies in Asia, Oceania, Europe, and North America released Wednesday showed broadly that views of China and confidence in Mr. Xi are at or near historic lows, with large majorities saying Beijing does not respect its people’s personal freedoms.

In Australia, for example, confidence in Beijing as a responsible world actor and economic partner has plummeted since 2018, when 52% of Australians said they trusted China. Nearly two-thirds of Australians now see China as a security threat to their country, according to an annual poll by the Lowy Institute released last week.

In Southeast Asia, China is viewed as the most important economic and political power in the region, but this also generates worries over Beijing’s growing clout, according to a February survey of experts in member states of the Association of Southeast Asian Nations, conducted by the ASEAN Studies Center of the ISEAS-Yusof Ishak Institute in Singapore. The majority polled said that if they had to take sides between the United States and China, they would choose the U.S, with the number choosing China dropping from 46.4% in 2020 to 38.5% this year.

“China’s reputation … in large parts of the world, particularly in the more developed world, has been going steadily down,” says Rana Mitter, director of the University of Oxford China Center and author of “China’s Good War: How World War II Is Shaping a New Nationalism.”

As Mr. Xi continues to consolidate power at the party’s helm, the gap is likely to widen further between the type of diplomatic messaging that would appeal to foreigners and the sort demanded by an increasingly hawkish public inside China, analysts say.

In May, for example, the CCP’s Political and Legal Affairs Commission posted images on Weibo, China’s Twitter, that contrasted the burning of mass funeral pyres amid India’s worst coronavirus wave with China’s recent rocket launch, under the words “China’s ignition vs India’s ignition.”

Inside China, online ultranationalists widely defended the post, which was later taken down, and criticized conservative commentators who expressed reservations as being too soft. Those attacked included even stalwart party backers such as Hu Xijin, editor of the jingoistic, party-affiliated newspaper Global Times.

Ultranationalists online have also labeled as “traitors” nearly 200 Chinese intellectuals who participated in Japanese government-funded exchange programs in Japan between 2008 and 2019. And in March, a Chinese official proposed that the government end the mandatory teaching of foreign languages, and drop English as a requirement for university entrance tests.

There are indications that the party recognizes the risk that stoking nationalism to bolster its legitimacy at home could isolate China and constrain its foreign policy options. The party’s Politburo recently held a study session on the need to “tell China’s story well,” at which Mr. Xi said the country faces a “public opinion struggle” and urged officials to build a “credible, lovable, and respectable” image of China.

“Our discourse … lags behind the scale and speed of our country’s rise,” wrote Zhang Weiwei, who attended the study session, in Beijing Daily. He called for Chinese officials and scholars to “establish our own political narrative of China” and deconstruct the West’s.

Nevertheless, China’s diplomats continue to “fight back” in what they call a protracted war with the West, their messages amplified on Twitter and Facebook by real as well as fake accounts, according to a recent study of the social media accounts of some 300 Chinese diplomats by Philip Howard, director of the Oxford Internet Institute. Meanwhile, Beijing is less likely to make foreign policy concessions or adopt a softer tone that the public would view as weakness, because that could incite unrest and undermine the party’s claim to rule, observers say.

The party is trying to “ride a line between wanting to try and create a kind of social media public in China that has this very strong sense that … China has been treated badly by the world and that it must rise and find its place, but at the same time not allow enough of that, that it would actually undermine the government of the CCP itself,” says Professor Mitter, an expert in the history and politics of modern China.

“The very open attitude Chinese people have had to integration and importation of outside ideas … has been really important for the past four decades to facilitate China’s rise,” he says.

Adding to the isolation, Beijing’s stance toward foreigners and imposition of sweeping new national security rules are leading foreign professionals with long-standing China ties to become more reluctant to travel to the country, according to a recent, informal survey by the blog China File, an online magazine published by the Center on U.S.-China Relations at the Asia Society.

“What does China look like 10 years from now, when you have no pragmatic liberal voices in the discourse?” wonders Mr. Blanchette. With an ultranationalist leader in Mr. Xi, whose tightening grip on power, domestic repression, and certainty in his direction mean less room for course corrections, “it’s a really nasty echo chamber that I think will continue to drive China.”