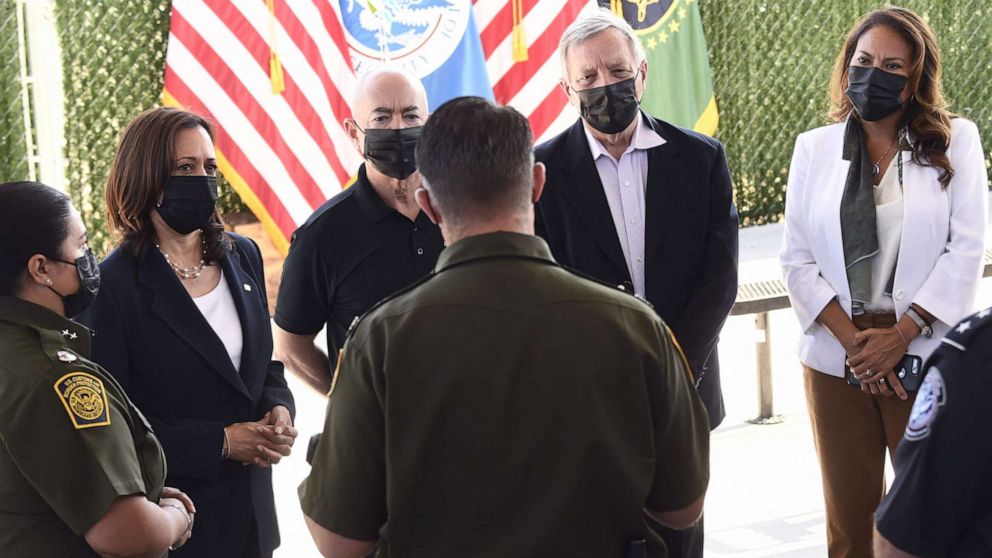 Vice President Kamala Harris made her first visit to the southern border since taking office on Friday, amid GOP pressure and ahead of former President Donald Trump doing so next week.

Harris began by touring a processing center in El Paso, Texas, where the White House said she met with migrant teenagers and legal and other advocates before holding a news conference with Homeland Security Secretary Alejandro Mayorkas.

It’s the first time Harris has traveled to the U.S.-Mexico border since President Joe Biden tasked her with tackling the root causes of migration from Central America and challenges dealing with the flow of migrants, especially families and unaccompanied children.

Some Democrats have pressured Harris to visit the border as well, and migrant advocates have criticized Biden and Harris for moving too slowly to address the problem.

“We are here today to address, and to talk about what has brought people to the U.S. border, and against continue to address the root causes, cause people to leave their home country,” Harris told pool reporters after landing.

She argued that it was “always the plan” to come to El Paso after repeatedly brushing off questions about her travel to the border during her trip earlier this month to Mexico and Guatemala.

Harris took a swipe at what she called the “disaster” that resulted from Trump’s “Remain in Mexico” policy and his family separation policy.

“What is happening here in El Paso, really is in many ways, highlights many of the facets on the issue of immigration. It is here in El Paso, that the previous administration’s child separation policy was unveiled. And so we’ve seen the disastrous effects of that right here in this region.”

At the same, as she discussed meeting with young migrant girls, Harris said “this issue cannot be reduced to a political issue.”

When asked on a call with reporters Thursday why Harris was traveling to El Paso instead of the Rio Grande Valley, where there is a higher flow of migrants and the facility in Donna was completely overwhelmed, her chief spokesperson, Symone Sanders, defended the El Paso choice to visit.

“El Paso being the birthplace of the previous administration’s family separation policy,” she said. “It is an important part of the story here, and one that you can expect we will continue to tell tomorrow on the ground.”

Trump is also expected to visit the southern border on June 30, but Sanders said that played no factor in Harris deciding to pick now as the time for her to go.

“This administration does not take their cues from Republican criticism, nor from the former president of the United States of America,” she said. “We have said over a number of different occasions, and the vice president has said over the course, over the last three months, that she would go to the border, she has been before, she would go again. She would go when it was appropriate, when it made sense. And this trip tomorrow, this timing is what made sense.”

Biden, who told migrants “don’t come” in an ABC News interview in March, weighed in on Harris’ trip to the border for the first time Thursday, saying she has essentially laid the groundwork to know what needs to be done to ameliorate the crisis there.

“She’s done a great job so far, and the reason why it’s important that she go down, she’s now set up the criteria, having spoken with the president of Mexico and Guatemala, visited the region, to know what we need to do,” Biden said.