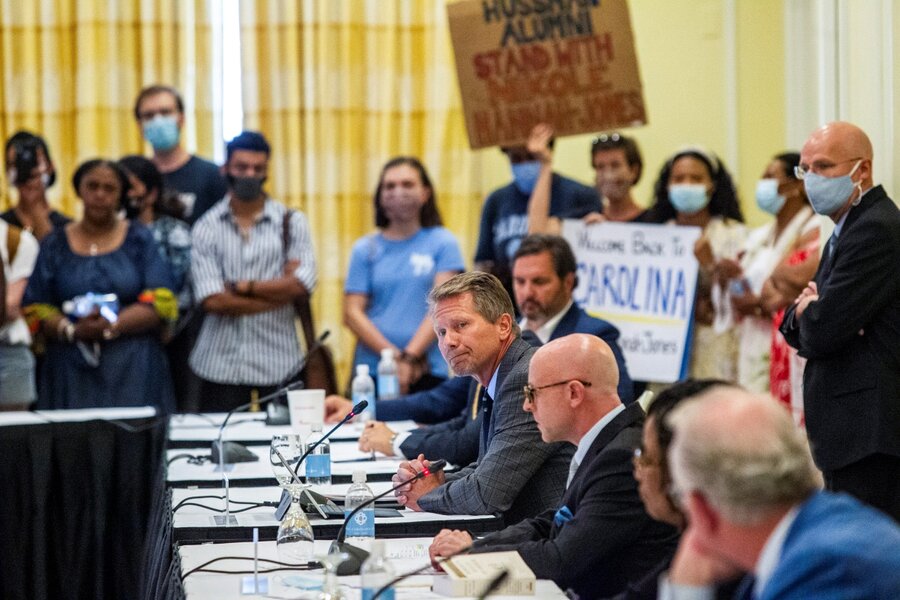 Trustees at the University of North Carolina (UNC) at Chapel Hill approved tenure Wednesday for Pulitzer Prize-winning investigative journalist Nikole Hannah-Jones, capping weeks of tension that began when a board member halted the process over questions about her teaching credentials.

The board voted 9-4 to accept the tenure application at a special meeting that included a closed-door session that had sparked a protest by supporters of Ms. Hannah-Jones. At one point, a student said she was manhandled by a campus police officer trying to get her out of the ballroom where the meeting was held.

“Today we took another important step in creating an even better university,” trustee Gene Davis said after the vote was announced. “We welcome Nikole Hannah-Jones back to Chapel Hill.”

Mr. Davis said that in granting tenure to Ms. Hannah-Jones the board was reaffirming its commitment to the university’s highest values of “academic freedom, open scholarly inquiry, commitment to diversity of all types, including viewpoint diversity, and promotion of constructive disagreement and civil public discourse.”

The university had announced in April that Ms. Hannah-Jones – who won a Pulitzer Prize for her commentary essay in The New York Times Magazine’s 1619 Project focusing on America’s history of slavery – would be joining the journalism school’s faculty. It said she would take up the Knight Chair in Race and Investigative Journalism in July with a five-year contract.

But Ms. Hannah-Jones’ attorneys announced last week that she would not report for work without tenure, prompting a call by Student Body President Lamar Richards, who’s also a trustee, for the board to convene a special meeting no later than Wednesday.

Ms. Hannah-Jones said in a statement Wednesday evening that she was honored and grateful for the widespread support she received in her fight for tenure. She said the tenure issue is about more than just her.

“This fight is about ensuring the journalistic and academic freedom of Black writers, researchers, teachers, and students,” said Ms. Hannah-Jones, who didn’t attend the meeting. “We must ensure that our work is protected and able to proceed free from the risk of repercussions, and we are not there yet.”

In a statement posted to the NAACP Legal Defense and Educational Fund website, Ms. Hannah-Jones didn’t immediately commit to coming to UNC.

“These last weeks have been very challenging and difficult and I need to take some time to process all that has occurred and determine what is the best way forward,” she said.

“I strongly believe that she has the right to express her ideas, and that it is critical to do so here at this great university,” Mr. Meekins said. “I believe that we have an incredible opportunity for our students to learn from Nikole Hannah-Jones as a journalist and a scholar.”

Before Wednesday, the school had little to say about why tenure was not offered, but Walter Hussman, an Arkansas newspaper publisher and a prominent donor whose name is on the journalism school, revealed he had emailed university leaders challenging her work as “highly contentious and highly controversial” before the process was halted.

“The University has now voted to grant tenure to Ms. Nikole Hannah-Jones. I look forward to meeting her and discussing journalism,” Mr. Hussman said in a text message. “Our plan is to continue to support the UNC Hussman School of Journalism and Media in advocating for the core values.”

Earlier in the year, Ms. Hannah-Jones’ tenure application was halted because she did not come from a “traditional academic-type background,” and trustee Charles Duckett, who vets the lifetime appointments, wanted more time to consider her qualifications, university leaders had said. Mr. Duckett voted Wednesday for approval of her tenure application.

Some conservatives have complained about The 1619 Project, which focused on the country’s history of slavery.

The earlier decision by trustees to halt Ms. Hannah-Jones’ tenure submission sparked a torrent of criticism within the community. It also laid bare a depth of frustration over what critics decried as the school’s failure to answer longstanding concerns about the treatment of Black faculty, staff, and students.

Several hundred UNC students had gathered near the chancellor’s office last Friday to demand that trustees reconsider tenure for Ms. Hannah-Jones. Protesters supporting her filed into the room at the start of Wednesday’s session. But when the board went into closed session, most of them left, save for a small group that was forced out, including the student who said she was pushed by a UNC Campus Police officer.

After the session reopened shortly after 6 p.m., the protesters returned to an increased police presence. After the trustees adjourned the meeting, the protesters began shouting at Davis and UNC Chancellor Kevin Guskiewicz to bring about promised changes for Black students which they said haven’t occurred yet. The students submitted a list of more than 50 demands, including decreased police presence and acknowledgement of Black contributions to the university.

Susan King, the UNC journalism school dean, said she was deeply appreciative to the board for approving Ms. Hannah-Jones’ tenure.

“Hannah-Jones will make our school better with her presence,” she said in a statement. “She will deepen the University’s commitment to intellectual integrity and to access for all.”