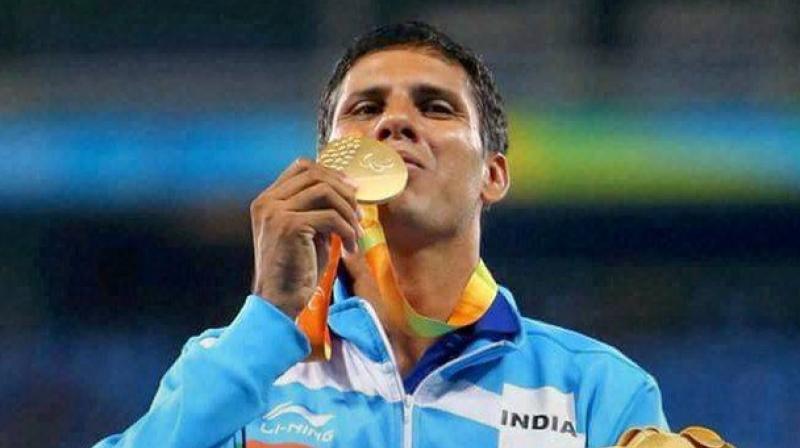 New Delhi: A day after obliterating his own world record, two-time Paralympic gold-medallist, javelin thrower Devendra Jhajharia, is targetting a distance of 68m at the Tokyo Games, confident that he can breach the world mark once again.

The first Indian athlete to win two individual gold medals at an Olympic or Paralympic event, Jhajharia booked his Tokyo Paralympic berth in the men's F-46 category in style, sending the spear to record-breaking distance of 65.71m during the trial here on Wednesday.

India's greatest Paralympian, who won the gold in the 2004 and 2016 Games — both with world record breaking throws, said he has worked on increasing the power in his shoulder.

"I have increased my shoulder exercises. You need to do a special rehab for the shoulder, my flexibility is good but I worked on improving the strength."

The 40-year-old said he has proved that "age is just a number" with his recent feat, adding that for a sportsperson, it is more important to be mentally strong.

"I don't think of it much. Now that I have broken the world record at 40 plus years I have proved that age doesn't matter. As you age, the training needs to be tweaked, one can't train like when they were 17-18 years old but then you have experience, that helps.

"My coach, fitness trainer and physiotherapist have worked a lot on me, my family has kept me free because I train at the Gandhinagar coaching camp. I think you have to be mentally strong more than being physically fit in sports.

"I was mentally fit for this competition. I have improved the record be almost 1.75m, which is a lot," he added.

Hailing from a small village in Rajasthan's Churu district, Jhajharia, was around eight years old when his left hand had to be amputated immediately after he accidentally touched a live electric cable entwined in a branch of tree he had climbed.

He falls under the F-46 category which denotes athletes having a single below or above the elbow amputation.

Warned by his coach against putting on weight during the COVID-19 induced lockdown, Jhajharia, who was in his village, grabbed on to anything and everything, including car tyres and gas cylinders, to do his workouts.

"I was in my village during the lockdown and there was no facility, I trained inside a room but I feel I have learnt a lot from that experience also, how to stay fit even then.

"My coach had told me that I cannot put on any weight in the lockdown, if it increases you won't be able to perform. I did core exercises. I had no equipment so I used the wheels of the cars, gas cylinder, cycle tube etc."

Jhajharia is confident that they will continue the momentum in Tokyo. He predicted a haul of 15 medals.

"I am confident that the country's para athletes will do well in Tokyo. I am expecting 15 medals. The javelin throwers are doing well, five of our high jumpers are doing well in different categories, badminton team is also very good," he said.