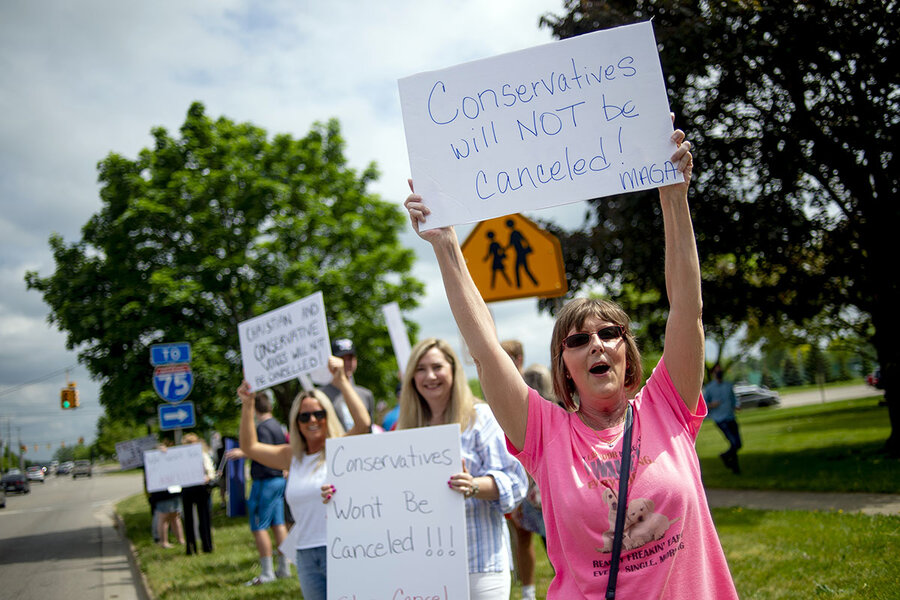 At this bitterly polarized moment, those lines are particularly fraught. People on both the political right and left have struggled to navigate ever-evolving interpretations that are sometimes unfamiliar, sometimes at odds with one another. But in general, both sides in their own ways have begun to emphasize why government authorities, private businesses, or college administrators should more tightly regulate, if not suppress, certain kinds of public speech.

The battle lines are asymmetrical, with Republicans aggressively using new state laws to curtail protests and courses of study. Liberals, meanwhile, have relied predominantly on societal pressure to cull speech they find offensive or hateful. The result is that the ideals of free speech are being simultaneously reshaped in profoundly different ways by both ends of the ideological spectrum, challenging notions of free speech that not long ago were widely considered bedrock.

“It appears that the commitment to free speech is increasingly endangered in contemporary American society,” says Anthony DiMaggio, a political scientist at Lehigh University in Bethlehem, Pennsylvania.

Views from left and right

On one hand, he says, most of the talk has been “about the intolerance of liberal ‘cancel culture’ or big tech social media platforms that are deplatforming right-wing politicians and public intellectuals.” But such talk largely concerns cultural issues within mostly private arenas. That’s outside the purview of First Amendment law.

The deeper free-speech issues on the left and right have centered around the nation’s deep-seated conflicts over race, including various campus speech codes and prohibitions against hate speech.

In the past few months, Republicans in dozens of states have passed regulations aimed at Black Lives Matter protests while also proposing government bans on the teaching of critical race theory in public classrooms or faculty applying it research projects.

On the left, organizations such as the American Civil Liberties Union, which has long made defending free speech its signature issue, has in many ways retreated from its historic mission to defend even the most repugnant speech.

“The old guys who remember the flag of Skokie and other free speech battlegrounds like me, they’re dying off,” says Bruce Rosen, a “proud member” of the ACLU and a former board member of a local chapter in New Jersey.

In one of the organization’s most famous cases, in 1977 a Jewish lawyer named David Goldberger helped defend the right of a Nazi group to peaceably assemble in Skokie, Illinois, a Chicago suburb that was home to a Jewish population including dozens of Holocaust survivors. Even then, the case caused many ACLU members to resign.

The internal tensions between some of the younger attorneys at the organization and the older guard came to a head in 2017, after ACLU attorneys helped defend the right of white supremacists to march in Charlottesville, Virginia. Violence erupted at the event, and a neo-Nazi driver stuck and killed a young woman and injured 19 others.

“Younger lawyers nowadays are asking two questions,” says Justin Hansford, director of the Thurgood Marshall Civil Rights Center at Howard University in Washington. “If you have a limited pool of resources – and you do – why spend those resources on a point of pride as opposed to spending them in areas that will help bring about a reality closer to what your true vision is?”

The ACLU also raised record amounts of money during the Trump administration, he notes. “And those people who are supporting the ACLU, are they really eager to see you represent the Nazis simply to uphold a principle to ensure that speech you hate the most is also represented in American society?”

The value of free speech is often couched in cultural aphorisms such as the old saying said to date back to the French Enlightenment: “I may disapprove of what you say, but I will defend to the death your right to say it.” But another cultural aphorism, taken loosely from a 1919 Supreme Court ruling, proclaims, “You can not yell, ‘Fire!’ In a crowded theater.”

Legal precedent holds that people can be held liable for certain kinds of speech, such as false statements injure others’ reputations or rhetoric that incites others to violence. As such, the government has the power to restrain political speech that presents “a clear and present danger” to the country, especially during times of war, the Supreme Court has said. Civil authorities charged with maintaining public safety have also been permitted to regulate the time, manner, and place of protected speech and lawful assemblies.

Republicans are now aggressively using that discretionary power. During the past year, Republicans in 20 states have enacted some 36 new restrictions on the right to peaceful assembly, with 58 new bills still pending in other states across the country, according to a tracker at The International Center for Not-for-Profit Law.

In Florida, for example, the GOP-led legislature passed sweeping new penalties in April against protesters who damage property or cause injuries, making it a felony, and expanded the definition of “riot.” The law also made municipal governments liable for failing to “respond appropriately to protect persons and property during a riot or unlawful assembly,” among other new restrictions. Republican Governor Ron DeSantis called it “the strongest anti-looting, anti-rioting, pro-law-enforcement piece of legislation in the country.”

Florida, along with Oklahoma and Iowa, have also passed new laws giving immunity to drivers who strike protesters. States including Arkansas, Tennessee, and Texas have added new penalties for protesting near pipelines and other critical infrastructure, among other new restrictions. Other states have increased the fees necessary to obtain permits to assemble for a protest.

Professor Hansford of Howard University says he is “a big fan of free speech.” But as a legal scholar who applies critical race theory to his research, he’s found that the high ideals of free speech and assembly have never been fully and equally applied to Black communities throughout American history. His research has found that federal and especially state governments have long used their discretionary powers to ensure order to suppress the First Amendment rights of communities of color.

But the high ideals of free speech have never been fully and equally applied in the United States. Governments have long used their discretionary power to suppress the First Amendment rights of Black communities.

“There’s never been a moment where there was even close to a level of parity when it comes to freedom of speech protections,” he says. And even though the vast majority of Black Lives Matter protests have been lawful and peaceful, these laws’ emphasis on the instances of “rioting” and “looting” are an example of how First Amendment restrictions are directed against communities of color.

For him, the contrasting responses between the Black Lives Matter protest in Washington in June 2020 and the storming of the Capitol on Jan. 6 speaks volumes. When Black people were protesting, fully armed National Guard troops in camouflage stood guard throughout Washington with police in riot gear. On Jan. 6, there was little security and no National Guard troops were deployed.

“And even more so now, if you take such restrictions out of the realm of protests and you look at this hullabaloo over critical race theory, we saw people who were, maybe just one year ago, really up in arms about violations of free speech on campus, and how we need more spaces for more people to say whatever they want. Now there’s literally laws being passed … to stop people from thinking and expressing ideas about race and racial justice at these very same campuses,” Professor Hansford says.

Republicans in 26 states have introduced bills to restrict teaching critical race theory or limit discussions of race and social justice. Nine of these states, including Florida, Idaho, Tennessee, Texas, and New Hampshire have passed such legislation.

Last week, too, Florida Governor DeSantis signed a bill meant to stand against the “indoctrination” of students in public universities. It requires administrators to survey students and faculty about their viewpoints. The stated goal is to discover “the extent to which competing ideas and perspectives are presented” in public institutions and whether students and faculty “feel free to express beliefs and viewpoints on campus and in the classroom.”

Such problems on American campuses are real, says Kenneth Lasson, a professor of civil liberties and international human rights at the University of Baltimore School of Law. “Those with opinions that might challenge campus orthodoxies are rarely invited, and often disinvited after having been scheduled, or shouted down or otherwise disrupted.”

“When protestors embroil visiting speakers, or break in on meetings to take them over and list demands, or even resort to violence, administrators often choose to look the other way,” he adds.

Many students do express they are increasingly “walking on eggshells” and experiencing what free speech advocates have long called the “chilling effects” of self-censorship, says Kyle Vitale, director of programs at Heterodox Academy (HxA), a nonpartisan collaborative of college professors and students committed to open inquiry and diverse viewpoints in higher education.

In a 2020 survey, HxA found that 62% of sampled college students agreed the climate on their campus prevents them from saying things they believe, up from 55% in 2019. And students across the political spectrum expressed reluctance to share their ideas and opinions on politics, with 31% of self-identified Democrats, 46% of Independents, and 48% of Republicans each reporting reluctance to speak their mind.

“Freedom of speech on college campuses is instrumental to the pursuit of knowledge and truth, though it is not an absolute good,” Mr. Vitale says. “Free speech should be used in service of truth-seeking discourse; it should not be seen as permission for anyone to say absolutely anything in any context without repercussions.”

“This is a subtle but important nuance that can help bridge the divide when it comes to the national conversation,” he says. Developing certain “habits of heart and mind” can foster diverse ideas and constructive disagreements. “Rigorous, open, and responsible engagement across lines of difference is essential in separating good ideas from bad, and making good ideas better.”

“Hearing, honoring, and respecting dissent, even when inconvenient, can sharpen one’s own position, expand one’s knowledge, and help us see that “conflicting doctrines share the truth between them.”